Terry Douglass was a high school student in the early 1960s when the U.S. Atomic Energy Commission made it a nationwide goal to convince a wary public of the advantages of nuclear power.

Like most Americans at the time, he knew splitting certain atoms produced energy that could be used in military weaponry. Douglass didn’t consider the full range of nuclear possibilities, however, until a mobile museum called “Atoms for Peace” stopped by his high school in west Tennessee. Exhibits inside the vans typically included things such as radiation suits and also mechanical hands that allowed for safe handling of radioactive materials.

“Stepping inside that van changed my life,” Douglass said. “I was a junior in high school and I started thinking about the possibilities of using radiation for peaceful purposes, especially for things like medicine. In fact, I titled my senior paper ‘Atoms for Peace.’” It became my passion.”

More than a half century later, it still is.

After getting his Ph.D. in electrical engineering from the University of Tennessee, Douglass spent 15 years at EG&G Ortec (he was CEO from 1980 to 1983) before founding CTI Molecular Imaging Inc., where as president and CEO, he played a vital role in the development and commercialization of positron emission tomography (PET). PET is a nuclear medicine functional imaging technique used to observe metabolic processes in the body. Combined with computer assisted tomography (CT), it became the world’s finest tool in early cancer detection.

But as monumental as PET has been to detection, Douglass said he’s even more excited about an enhanced cancer treatment that his new company, Provision Healthcare, is expected to bring to New Orleans in late 2019. It’s called the ProNova SC360 Proton Therapy System, and Douglass said it will change the way battle is waged in the war against cancer.

Provision and its partners announced in April they will make a $100 million capital investment in the Crescent City to build the Louisiana Proton Therapy Center in the expanding biomedical corridor in downtown New Orleans.

"At LED, we’re always looking for ways to bring quality jobs to our state and this certainly is a great source of well-paying jobs. But it’s not just good for our economy. This is about saving lives…We’re thrilled to have this project coming to our city and our state…It shows great confidence in our market." LED Secretary, Don Pierson

The project is expected to create 60 new direct jobs with an average annual salary of $100,000 plus benefits. An additional 63 jobs will be indirectly created as a result, according to Louisiana Economic Development (LED)

The Louisiana Proton Therapy Center is expected to be a boon for New Orleans, which would love to further tap into the lucrative “medical tourism” market that put cities such as Houston (M.D. Anderson Cancer Center) Memphis (St. Jude’s Children’s Research Center) and Rochester, Minnesota (the Mayo Clinic) on the medical map.

“At LED, we’re always looking for ways to bring quality jobs to our state and this certainly is a great source of well-paying jobs,” said LED Secretary Don Pierson. “But it’s not just good for our economy. This is about saving lives…We’re thrilled to have this project coming to our city and our state…It shows great confidence in our market.”

Provision is scheduled to open proton therapy centers in both New Orleans and Orlando, Florida, in 2019, with ground expected to be broken here in the fourth quarter of 2017. The company also is expected to open a treatment center in Nashville, Tennessee, in 2018, joining the company’s initial facility in Knoxville.

There are currently 25 proton therapy treatment centers in the U.S., though proton therapy patients report far fewer side effects than those who are treated with traditional radiation, chemotherapy and even surgery.

The limited number of proton therapy centers is directly linked to the $150 million price tag that comes with construction of the large cyclotrons that move protons at rapid speeds to create energy. That positively charged energy is used to treat cancerous tumors. 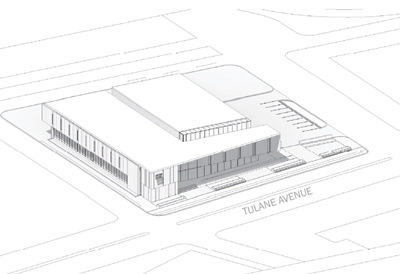 That’s where Douglass’s ProNova enters. His machine is touted as costing half what older proton therapy cyclotrons do, as well as being half the size and one-tenth the weight of current systems. Douglass’ device has been cleared by the FDA and will be in use later this year in the Knoxville facility. That treatment center currently uses the larger-sized proton therapy cyclotron.

The other planned Provision centers will use only the ProNova technology, which Douglass helped develop after selling CTI to Siemens at a market capitalization of $1 billion.

Douglass said Provision decided on New Orleans for expansion because of its ability to host visitors. With an abundance of hotel rooms, restaurants and tourist attractions making the Crescent City one of the world’s leading destinations, patients can enjoy ready-made creature comforts between treatments (many of which last anywhere from 30 to 60 days.) And because of the fewer side effects associated with proton therapy, many patients will feel up to joining their accompanying family members at area attractions, Douglass predicted.

“There’s what we call a ‘halo effect’ with this,” Douglass said. “About 70 percent of patients are self-referred to the clinic in Knoxville, and we expect similar numbers in New Orleans. But only 30 percent of those people are viable candidates for proton therapy. So a lot of these patients will be in traditional treatment facilities which already are in place there. We’ll combine that with proton therapy and things like immunotherapy which also has shown tremendous promise. All of these things are tools we can use to fight the disease.”

The Louisiana Proton Therapy Center is not only for visitors, though. Douglass said clinical trials will make the facility available to a larger number of patients across the socioeconomic spectrum, many of them from the New Orleans area. Approximately 900 patients are expected to receive proton therapy in New Orleans annually given proposed financing for the local center. That number could grow as proton therapy becomes more affordable, a trend that Douglass wholeheartedly expects given the promise of ProNova.

“(Proton therapy) is a name product that will bring people here,” said Dr. Larry Hollier, chancellor of LSU Health Sciences Center New Orleans. “Patients that are best suited for proton therapy will receive it, and we’ll be able to move those who would benefit more from a traditional treatment into the system we already have in place. This is absolutely going to make New Orleans a destination for cancer treatment.”

What Exactly is Proton Therapy?

Proton therapy involves placing positively charged energy directly into a cancerous tumor. Cyclotrons accelerate protons to rapid speeds, which produces energy and because of the positive charge, it can be controlled and precisely delivered into a cancerous mass.

Traditional radiations such as x-rays, gamma rays and photons are more “blanket approaches” to treatment, explained Terry Douglass, founder and CEO of ProNova Solutions, LLC, and often inadvertently destroy healthy tissues near the tumors. The more precise proton therapy means fewer side effects and more efficient treatments, which translates to less cost across the board.

ProNova takes the same principles of proton therapy and puts it into a more compact and energy-efficient package. ProNova’s lower price tag (less than half of the usual $150 million needed to construct previous proton therapy centers) was crucial, Douglass said, given the rate of cancer diagnoses today.

More than 1.7 million people will be diagnosed with cancer this year in the U.S. alone and 340,000 of those will be good candidates for proton therapy. But with only 24 such operating centers in the U.S., only 22,100 patients can be treated in America this year. That means that at least 1,700 more proton therapy centers would be needed to meet current demand for the technology.

Douglass is undeterred by the challenge.

“As excited as I was about PET, (ProNova) has even bigger potential,” he said. “We’ve reduced the cost by a factor of two…This is why I’m here…I believe in providence and I believe this is going to help.”