A Fashionable Man And His Vests

“Vests are a great way to dress up an outfit for the office, or to wear with jeans and a cool pair of boots to go out to dinner,” says the program director for the Media Arts Department of Tulane University. “I have about 20 vests, in different colors and fabrics – from smooth suede, to a knotty-tweed, to more upscale cashmere.”

The handsome gentleman with a ready smile and a firm handshake has been at Tulane University for about 15 years.

“I started in an adjunct position, teaching one course at night when I worked as a reporter for the Times-Picayune newspaper,” he says. “Later, I taught two classes and it became a full-time teaching job right before Hurricane Katrina. After Katrina, I was promoted to program director for the Media Arts Department.”

Known as a man of style, it is only fitting that Paul would carefully select a wardrobe of vests to take him from his unique home in the now trendy neighborhood of Treme to work, play and everywhere in between. “The trick about wearing vests — if you’re going to wear them all the time — is to have a closet full of different fabrics,” he says. “I like rough, raw silk as much as I do a regular camel hair that you can dress up with a crisp white shirt. And it’s good to have a couple of lightweight cotton vests in case you want to wear one in the summer months.”

Step inside his charming cottage just three blocks from the French Quarter and you will find a home fit for the pages of a national magazine. “I love living in Treme; It’s the heart of the city. There is always music happening somewhere, whether it’s from a neighbor’s house who plays the trumpet, or on a corner where somebody is relaxing playing guitar, or a concert in nearby Armstrong Park.”

Paul purchased his “compound” just after Katrina. “It’s actually two cottages on the same property,” he explains. “I live in the larger one, and rent the smaller cottage, which is really just a smaller version of my house. It’s a very cool property where I’ve developed beautiful gardens over the past 10 years.” Conveniently located to the best restaurants in the French Quarter and other nearby neighborhoods, the house is in the heart of the Treme Historic District. “The house looks old and it’s a perfect fit with the neighborhood, yet everything is new,” he says. “It’s architecturally unique, with exposed brick walls, towering ceilings and slate flooring.” While he enjoys having a rental cottage right now, he is quick to point out that it would make a perfect single residence with three bedrooms and three bathrooms. 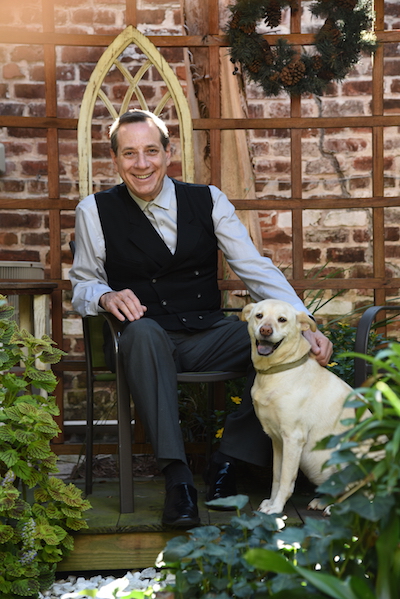 Walk through a side gate into Paul’s lush gardens and you will be amazed at his urban oasis. “Today I have one of the most amazing hidden gardens in the French Quarter-Treme area. The garden started with just four palm trees that I planted when I moved in. In the beginning, they were about a foot tall and now they are higher than my roof. There is something blooming all the time and always room for one more pot of flowers.”

Paul is quick to extol the virtues of living in Treme. “It a laid back place to live. It’s not hectic like the French Quarter where I use to live.” We walk down a pathway past the courtyard that separates the quaint cottages. It is truly a secret garden that is private and perfectly quiet. “Come inside and see where I keep my vests,” he urges as he opens the door that leads from the garden to the house. Soon we are upstairs in his charming bedroom with an interesting roof-top view of the neighborhood. “Here is my favorite vest,” he says, as he picks up a black, double breasted member of his collection. “It can go with just about anything. You can wear it with a suit to add some style, or wear it casually with boots and jeans to just hang out.” Next he picks up a brown tweed vest and says: “This one goes with just about everything. It is also a favorite in my closet.”

Paul also shows off the vest he wears with his tux. “This one is cut real low in front so you can still wear some great studs with your tux shirt,” he says, then ends the tour showing off a vest that comes with an interesting story: “I was in New York City and I saw a guy wearing a great vest in Macy’s,” he says. “He was shopping in the men’s department, and when I inquired about the vest, he said he just found it on a nearby rack and was trying it on. It was very cool and the only one left in my size. I smiled and told the guy I really wanted it. We both laughed and he took it off and handed it to me.”

Then Paul admits, “One day years ago I bought a vest from a street vendor in Philadelphia, and I still wear it to work to this day.” There are more stories to tell, but you get the drift. Paul and his signature vests are like their owner – never boring, and the venerable halls of Tulane are a bit more interesting when he is at work.”