When Alvin Babineaux walked through the doors at Pat O’Brien’s looking for a job on July 29, 1970, his 18th birthday, he didn’t know he’d still be there 48 years later.

“I started icing up Hurricanes and worked behind the bar,” said 66-year-old Babineaux nostalgically. “I did all kinds of things from cleaning up the place, to handling supplies, to doing everything it took to make it work. I cleaned every mug, table and chair, mirror and wall, even the roof. I’ve worked everywhere, except the ladies’ room.”

Famed New Orleans French Quarter bar, restaurant, Piano Lounge and “Home of the Hurricane” Pat O’Brien’s toasts to 85 years in business this month. Since Dec. 3, 1933, three families have owned the boozy barroom and Babineaux has met them all, including Pat O’Brien himself who ran a speakeasy a block away called Mr. O’Brien’s Club Tipperary until the repeal of Prohibition. O’Brien went legit in 1933 and he and friend/ co-owner Charlie Cantrell relocated Pat O’Brien’s Bar to its current location at 718 St. Peter St. in 1942. General manager George Oechsner, Jr. and his son Sonny took over as owners in 1978, and today, third generation family member Shelly Oechsner Waguespack runs the joint.

“Success is a result of sincere employee dedication to Pat O’Brien’s,” she said. “In fact, I would say that most of our employees are just as passionate about Pat O’Brien’s as our guests. People appreciate tradition. I think we have done a great job preserving the past and grasping the future. I love it when people visit and their first reaction is that the feeling, ambiance and the drinks never change. The reality is we continually evolve to be better.”

In 1973, Babineaux’ career path evolved when the general manager’s son, Shelly’s father Sonny Oechsner, tapped him to “play the tray” at a new daytime matinee show he was putting together in the Piano Lounge.

Babineaux’ mother Mickey Garza sang and played one of the dueling pianos there for 18 years. A Big Band singer from the 1930s, 40s and 50s, she rehearsed with her son to translate what he knew about rhythm and syncopation from playing the Congo drums to how to blast a beat and perfect a pitch banging thimbles on his fingers under a tray like his predecessor Eddie Gabriel. “Mr. Eddie” played the tray at Pat O’Brien’s for almost seven decades, and at age 95 even performed at the Piano Lounge the night before Hurricane Katrina hit in August 2005. Gabriel drowned in the flood waters in his 9th Ward home.

“There’s only one tray player on the planet right now, and it’s me,” said Babineaux with deference. “Mr. Eddie started it, and I’m continuing it.”

Babineaux confessed he’s gone “high-tech” with the help of downtown business Economy Iron Works, Inc. There, he’s been outfitted with a custom aluminum tray and made-to-order hard plastic thimbles measured specifically for eight of his fingers. He holds the tray with his two naked thumbs.

“The tray is only as loud as you hit it,” said Babineaux. “You change the volume and the pitch with the number of coins you put on it. I use five dollars worth of heavy quarters that dance on my tray when I hit it from below because nickels and dimes seem to fly right off.”

Despite Babineaux’ percussion prowess, the famed Hurricane cocktail gets top billing at Pat O’Brien’s. Owner Waguespack said they sell more than 500,000 Hurricanes a year at the New Orleans venue alone. Currently, there’s Pat O’Brien’s Courtyard Restaurant at 624 Bourbon St. adjoined to the flagship, a Pat O’s on the River, located a few blocks away from the flagship, and two franchises Pat O’Brien’s at Universal Studios in Orlando, Florida and Pat O’Brien’s San Antonio in San Antonio, Texas.

“It’s not just a drink, it’s an experience,” said Waguespack of the potent passion fruit potion. “For those who visit occasionally, it conjures fun memories. For a newbie, it’s a beautiful, tasty drink to fulfill all expectations. I refer to the Hurricane as an experience because it symbolizes deep-rooted history in New Orleans.”

Original owner Pat O’Brien has been credited for concocting the first rum and fruit juice Hurricane in the 1940s, when domestic liquor was in short supply and rum flowed with ease upriver from the Caribbean. But Waguespack assures the birth of the libation legend was a group effort led by O’Brien, Cantrell and her grandfather George Oechsner, Jr. including the unique idea of serving it in a glass that resembled the hurricane lamps on the bar tables.

McCorkle, 37, has worked at Pat O’Brien’s for 18 years. He said he’s mixed millions of Hurricanes during his tenure at the bar. Those who pay $13 for the drink can either take the glass with them as a souvenir or return it for a built-in four dollar deposit.

“I love the ‘wow’ factor I get from my guests as I serve them a refreshing drink and the excitement that builds up as they watch the team of elite bartenders rapidly dishing out drinks,” he said. “The compliments flow as they watch the show!”

“We’re told Pat O’Brien’s is the second highest liquor purchaser in Louisiana,” said Waguespack. “We’re also told we sell more liquor per square foot than any other bar in the country. Fifty to 75 percent of our sales are from Hurricanes, but stats aren’t that important to me. The most important thing is that our guests have fun and have wonderful memories.”

“People are excited to be here,” said musician Babineaux. “They get a Hurricane, get a buzz on and there’s a lot to see.”

Babineaux said at Pat O’Brien’s Piano Lounge, housed in a structure built in 1791, he has performed in front of, jammed with and taken song requests from the likes of Liberace, Britney Spears, Michael Bublé, Willie Nelson, Glen Campbell and Kayne West.

He remembers Richard Simmons jumping on top of the pianos and doing leg lifts; a stylish Caesar Romero strolling into a set with a gorgeous woman under each arm; “NCIS: New Orleans’” Scott Bakula gushing about a photo he’d taken years ago at the Piano Lounge of Babineaux and his son celebrating his birthday; and in 2010, New Orleans Saints offensive tackle Zack Strief getting up on stage and placing his newly won Super Bowl XLIV ring on top of his tray to bounce around with the loose change during a song in front of a packed house.

“A college professor came into the bar one night and said to me that this room brings everyone together,” said Babineaux. “From judges to cowboys to families to college kids to newlyweds, everyone is the same. Pat O’Brien’s is a great leveler and unifier. And it’s clean and classy. It doesn’t cost an arm and a leg to have a fun time here, either. People save up their money to come visit New Orleans, and I want to give them something they’ve never seen before.”

“It’s great hearing my customers’ stories about how they’ve been looking forward to visiting the historic Pat O’Brien’s, following in their parents’ and grandparents’ footsteps creating everlasting memories of their own,” said bartender McCorkle. “Telling someone I’m a bartender at Pat O’Brien’s can have a jaw-dropping effect, especially by other bartenders I meet when I travel. It makes me feel as if I’m royalty.”

“My grandfather was the general manager in the 1940s, and my dad pretty much grew up in the business and brought it to new heights in the 1970s as it gained international popularity,” said Waguespack. “I started working for the business in high school doing various things. So my appreciation began at an early age. My dad and grandfather lived at Pat O’Brien’s, and that attitude was and is contagious.”

The Oechsner family raised the bar when they purchased 624 Bourbon St. as a private event venue in 1990. This space connects to the main courtyard patio and to the St. Peter Street entrance adjacent to the Piano Lounge. In 1996, they rebranded it as a full-service dining room called Pat O’Brien’s Courtyard Restaurant. The upstairs Briars Suite is now used for private events, and Pat O’s on the River has hosted private events since 1996 showcasing enviable views of the Mississippi.

Pat O’Brien’s crown jewel remains the frolicking fire fountain located in the middle of the main 4,000 sq. ft. outdoor courtyard patio where most patrons gather to drink in the sweet cocktails and the stars.

“It’s the heartbeat of the place,” said Waguespack of the fountain that was designed and added in the 1960s to resemble an overflowing champagne glass. “Real estate value is relative. Intrinsic value is priceless.”

You can still purchase a professional photo taken of you and your party posing in front of the fountain, but selfies pretty much killed the tradition.

“These days, most people take a picture with their phone, and that aspect of sales have sharply declined,” confirmed Waguespack. “However, we always have a camera ready in the event someone wants a Pat O’Brien’s photo during the week, and, yes, we still have Helga roaming the floor with camera in hand on the weekends!”

Waguespack said Pat O’Brien’s merchandise accounts for less than 10 percent of sales, and they don’t price merchandise at a high profit point.

“It’s more about brand promotion than dollars,” she said. “Sales in the gift shop are typically impulse purchases as a memento of the fun experience. We sell mostly glasses and drink mixes online. It’s expensive to ship the mixes, so hopefully, we can get more distributors around the country to carry them. It would be really nice if the customer could buy it locally and avoid the shipping costs.”

After working at Pat O’Brien’s in some capacity ever since she was a kid, Waguespack said that only later in life did she feel destined to oversee the entire Pat O’Brien’s operation and that members of her team, including vice president Charlie Bateman who’s been with the company for 42 years, have made the journey even sweeter.

“Over the years, we’ve employed thousands, however, we have a high retention rate in certain positions,” she said. “We have a ’25-year club’ and we also have a ‘40-year club.’ That’s pretty amazing for a generational bar and restaurant business. Currently, we have about 200 employees.”

“I’ve worked with wonderful people and learned a lot,” he said. “Waiters, bartenders, managers and entertainers, people are so gracious here. I went from being a porter, to a barback, to a bartender, to a day manager, to the tray player and even got the keys to the place. It means a lot to me as famous as this place is,” said Babineaux, tearing up. “It’s a good place to work. It makes you humble. At Pat O’Brien’s, if you do a good job you’ll work there until you drop. It’s a kindness most businesses don’t afford.”

“When my Mom brought me to the Piano Lounge for the first time I was 12-years-old,” he said. “I thought, ‘What a beautiful place.’ Little did I know I’d be spending my life there.” 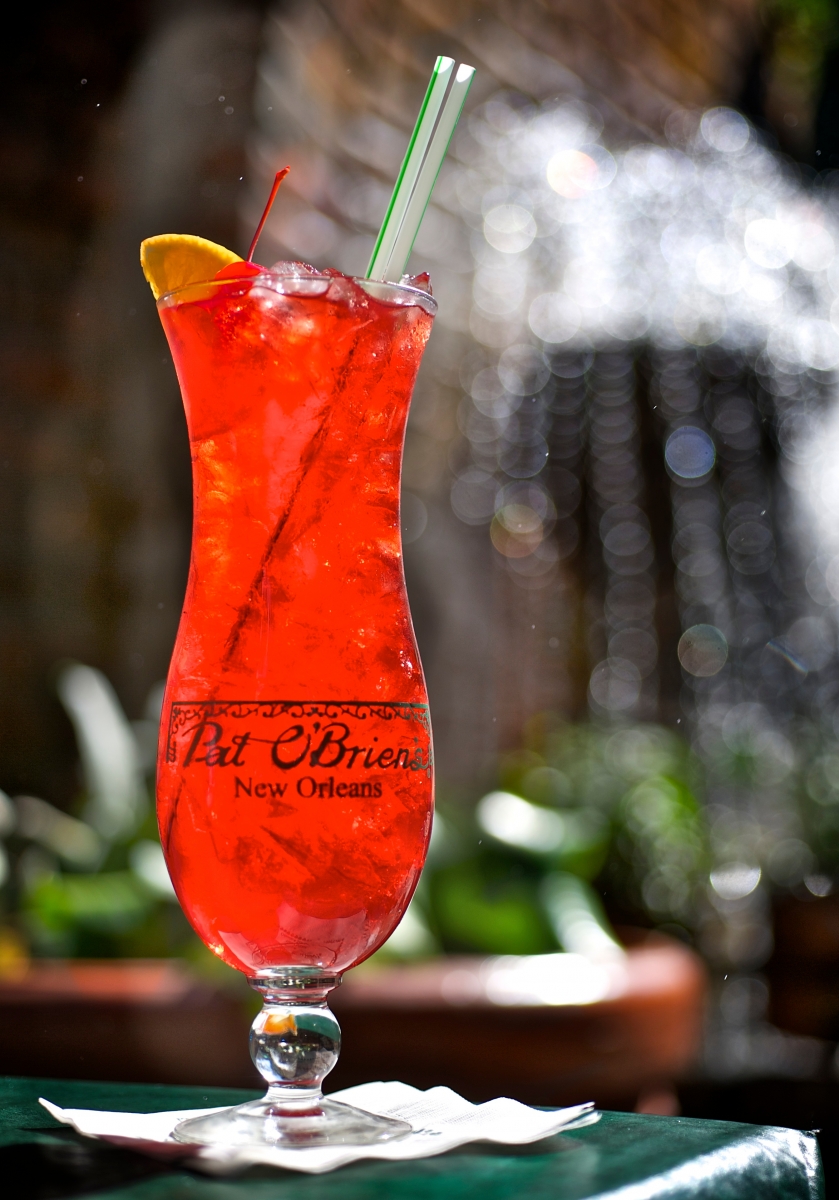