NEW ORLEANS – The 7th Annual New Orleans Oyster Festival celebrated the oyster this past weekend at Woldenberg Riverfront Park at the Mississippi River. More than 20 restaurants showed off their versatility of the region’s favorite bivalve at the Festival.

After 10 years of wins by Sonya “The Black Widow” Thomas, Adrian “The Rabbit” Morgan defeated her this year to return the winner’s belt to New Orleans.

The competition was decided by the number of dozen oysters consumed in 8 minutes. For the first time, the first and second place was decided by a tiebreaking heat. Adrian “The Rabbit” Morgan and Sonya “The Black Widow” Thomas had both consumed 42 dozen Louisiana oysters after the first round of competition. The final rankings were decided by who can consume 2 dozen Louisiana oysters fastest, of which Adrian prevailed to be named this year’s Acme Oyster House® World Oyster Eating Champion.

Jay shucked 16 oysters in the preliminaries to make it to the finals.

Honor shucked 20 oysters the preliminaries to make it to the finals. He placed first in the preliminary round making him the frontrunner for the competition onsite at the Oyster Fest.

Gus shucked 18 oysters in the preliminaries to make it to the finals. Gus took home second place in last year’s competition.

The competition was decided by the number of Louisiana oysters shucked in 2 minutes. The six finalists for the competition were decided after a preliminary shucking competition on Thursday afternoon at Desire Oyster Bar/Royal Sonesta New Orleans on Bourbon Street. 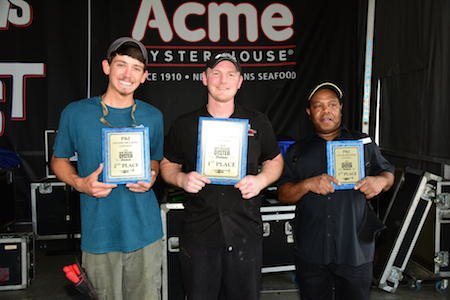