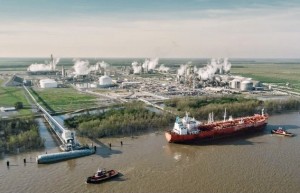 CF Industries plans to invest $198.5 million to construct a CO2 compression and dehydration unit at its Ascension Parish plant in an effort to reduce carbon emissions at what it says is the largest ammonia production facility in the world.

The project would create 12 new direct jobs with average salaries of $100,000 per year plus benefits. CF Industries would retain 521 existing jobs in the Capital Region.

“To achieve our goal of net zero emissions by 2050, Louisiana must simultaneously increase new clean energy investments and decrease current greenhouse gas emissions,” Gov. John Bel Edwards said. “CF Industries’ plan to add carbon capture capabilities to its Donaldsonville plant accomplishes that, while stimulating economic activity and creating high-paying jobs in Ascension Parish. We applaud the company’s commitment to sustainability and encourage other industry leaders to recognize that decarbonization is good for both our economy and our climate.”

CF Industries estimates this project would enable up to 6,000 tons of process CO2 per day – as much as 2 million tons per year – to be captured, liquefied and transported via pipeline to a sequestration site yet to be determined. This process would enable the company to produce up to 1.7 million tons of blue ammonia annually. A chemical process is considered “blue” when CO2 emissions are captured before their release into the air, making the process more carbon-neutral. Blue ammonia is seen as a key clean energy source for the energy transition since its components – nitrogen and hydrogen – do not emit carbon when combusted.

“We believe that ammonia will play a critical role in accelerating the world’s transition to clean energy and that demand for blue ammonia for this purpose will grow meaningfully in the coming years,” said Tony Will, president and chief executive officer, CF Industries Holdings, Inc. “We are pleased to be able to leverage our previous investments in Louisiana to add CO2 processing technology to our Donaldsonville complex that will enable a significant volume of blue ammonia production by the middle of the decade. This will position CF Industries and Louisiana at the forefront of this emerging global market.”

The project is the second this year by a Louisiana company aimed at reducing existing greenhouse gas emissions, following Cleco’s April announcement of a $900 million investment to add carbon capture and sequestration to its Boyce, La., power plant.

“CF Industries is accelerating the transition to clean energy, serving as a leader in the production of green ammonia and now in the construction of infrastructure for the permanent sequestration of carbon dioxide,” said Clint Cointment, Ascension Parish President. “Ascension Parish is proud to be the location for this investment by CF Industries that creates a cleaner, sustainable future.”

CF Industries’ application for participation in the State of Louisiana’s Industrial Tax Exemption program has received Board of Commerce and Industry and all necessary local government entity approvals. The company is also expected to utilize the state’s performance-based Quality Jobs program.

“This investment by CF Industries further exemplifies why Ascension Parish is an ideal location for the production of sustainable, clean technologies for both energy and emissions reductions,” Ascension Economic Development Corporation President & CEO Kate MacArthur said.

Dump of Menhaden in Gulf Brings Latest Calls for Regulation