The idea for the event was born several years ago when Barry Kern, president and CEO of Kern Studios, first met John R. Nickens IV, president and CEO of Children’s Hospital New Orleans. During a wide-ranging conversation, Kern talked about his work building floats for a hospital-affiliated holiday parade in Nashville. Nickens was intrigued by the idea. 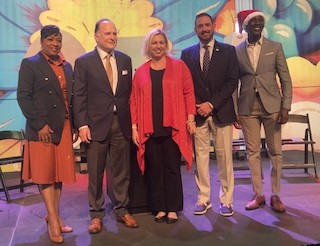 “John said, ‘You know, one day we need to do something like that here in New Orleans,” Kern told the crowd at Mardi Gras World. “Well, here we are five years later … and we have a chance to create a parade in New Orleans that will have local and national television coverage, world-class props and figures, and pageant-style small floats especially made for this Christmas parade.”

To make it happen, the float builder and the hospital partnered with several other organizations, including the Downtown Development District, New Orleans & Company, the French Market Corporation and WDSU-TV. Float sponsors include B1 Bank, Chick-fil-A New Orleans, the New Orleans Ernest N. Morial Convention Center, the National WWII Museum, Louisiana Feed Your Soul and Audacy.

For DDD President and CEO Davon Barbour, who’s been on the job for about a year after a successful stint in Los Angeles, the new holiday event fits with the mission of “curating the greatest downtown in America, where we create a place to live, work and play.”

“It’s really an opportunity for us to showcase our great community,” he said. “For four years, the Downtown Development District has produced a holiday event, so we thought about how to make it even bigger and better. It’s not only about community building; it’s also about celebrating all the businesses along the commercial corridors that are located along the parade route.”

As for the floats themselves, parade goers will be treated to all-new designs from Kern’s team, which is also creating several props that will be displayed downtown throughout the holiday season. Organizers are benefiting from the fact that Kern’s company has created similar holiday floats and fixtures for clients all over the world. 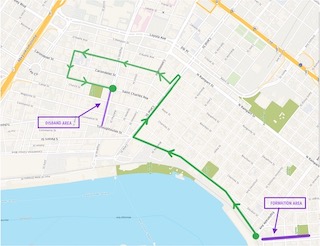 “We have parades and floats in every major theme park in the country,” said Kern. “We’re doing this for our own home town, but if any other city would ask me to do this, it would be well over a million-dollar bill.”

The parade will begin at the corner of Esplanade Avenue and North Peters Street, traveling North Peters to Decatur Street through the French Market toward Jackson Square and Oscar Dunn Park. The parade will then make its way back to North Peters, turning right on Canal Street, left on Baronne Street, traveling through downtown to Julia Street and ending along St. Charles Avenue in front of Lafayette Square, where an after party is scheduled to take place from 5 p.m. to 7 p.m. with music from Rebirth Brass Band.