Trapolin-Peer Architects' historic Warehouse District offices are a study in adaptive reuse with a modern sensibility. 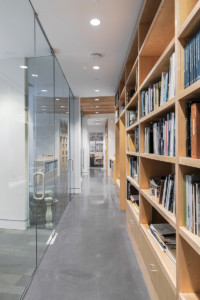 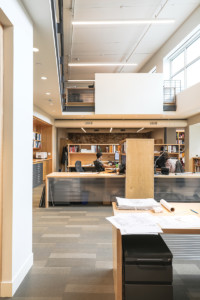 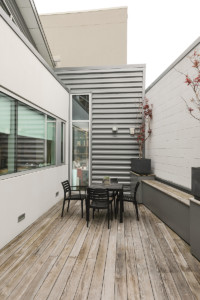 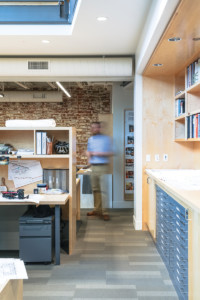 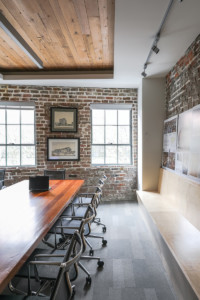 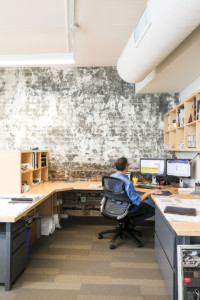 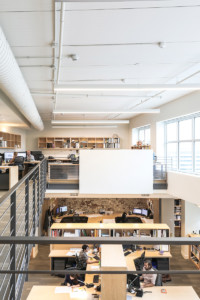 In 2003, Peter Trapolin, principal at Trapolin-Peer Architects, bought a pre-turn-of-the-century Warehouse District property at 850 Tchoupitoulas St. The intention was to move the firm from its offices at St. Charles and Julia streets to a larger space more indicative of the company’s architectural style and culture.

Two years later, after having the renovation priced out, Hurricane Katrina hit New Orleans. Then, in 2008, there was a recession, which meant the firm had to wait yet again to begin the project. Finally, in 2014, following a new set of plans and a new principal, Paula Peer, the company moved into its shiny, light-filled, sustainably designed digs.

“We work very collaboratively on teams and wanted to make sure we could work together,” says Peer. “It was really important to have an open studio. It enables creative solutions.”

With the studio — plus multiple pin-up boards throughout the offices — a reception lounge, one large and one small conference room, a kitchen, mezzanine and outdoor terrace space, there are multiple formal and casual meeting spaces for the 34-person staff. The former offices, founded as Peter M. Trapolin & Associates in 1981, were approximately 2,600 square feet. At 850 Tchoupitoulas the square footage tops out at 13,137, leaving ample room for the 7,134-square-foot architectural offices on the second floor, as well as two tenants, ARC Document Solutions and Tour Cycle Studio, in the remaining space on the ground floor.

Clean, modern lines are employed in the space, with storage for paper files and renderings spread throughout or in an off-site facility. The shelving and custom desks were made by John Doullut. The black ergonomic chairs at each desk are by Knoll. A custom pine table in the large conference room is by Strong Flooring and the rest of the furniture was sourced through AOS Interior Environments and KV Workspace. Blonde wood is at the forefront of the interior design, with the exception of a few accents, including the striking wood ceiling, which was made by using runoff of replaced boards from Pêche Seafood Grill, another of the firm’s commercial projects.

“As designers, we want to approach all of our projects sustainably, so we also ended up using a long span [structural insulated panels] for the roof,” says Peer. “It was also important for us to have good lighting, 100 percent LED lighting. We wanted to keep the aesthetics really simple.”

Having played a major role in the revitalization of the Warehouse District, it was important to Trapolin and Peer to incorporate their shared design philosophies of sustainable, adaptive reuse, while always staying true to the building’s historic architecture.

The building was designed by James Dakin and built by Sidle and Stewart in 1846 as a three-story building. Its first use was as offices for lawyer Rowland Redmond. Later it became home to the Royal Broom factory and then to Standard Supply and Hardware. Trapolin-Peer is known for projects that transform historic structures— such as The Saint Hotel, The Pontchartrain Hotel and the historic Factors Row building — into chic and functional contemporary and modern spaces, so it’s fitting for the firm to be in a building that reflects this ethos.

“What people don’t understand is that if you have a historic building or historic façade, you can use modern lines,” says Peer. “You can overlay modern design. We wanted to show our personality.”