Hunting, fishing and trapping in the River Region

Ronald “Shine” Boudreaux fishes at one of his favorite canals.

Technically speaking, the only two things required to try your hand at sporting the public lands of the river parishes are a valid license and equipment for catching your prey. Realistically, though, it takes a lot more. The expanse of southeast Louisiana that straddles the Mississippi River between Baton Rouge and New Orleans notoriously challenges even a skilled hunter, fisher or trapper. According to a few local legends, for a successful – or even marginally enjoyable – game expedition in the River Region, it helps to have the right footgear and a strong sense for the direction of the wind. And that is just for starters.

For both locals and visitors, Louisiana Department of Wildlife and Fisheries sets hunting seasons for everything from quadrupeds like squirrel and rabbit to alligators, white-tailed deer and various species of fish. A consultation with Wildlife Management Area and Federal Land Schedules ensures hunting and fishing activities are deployed legally for the specific open season.

Your Crappie is my Sac-a-lait

Along a stretch of Airline Highway (US 61) in Gramercy, Ronald “Shine” Boudreaux, a retired constable from District 1 in St. James Parish, stands nearly hidden under a covered bridge where he forgoes fancy fishing rods for a cane pole.

“Been fishing there since I was twelve years old,” says Shine. “The best time is when it is cloudy like this or if it is kinda cold.” His usual spot of choice is the second covered bridge where he uses a blue or white jig to catch his sac-a-lait. “Sometimes I use grass shrimp,” he says. “I catch them on the side of the road.”

It is sac-a-lait in St. James Parish, but others might know these fish as a crappie outside of the Louisiana bayou.

Shine, who earned his nickname back from his boyhood because the other boys at school always saw him smiling, also heads out to Vacherie, Louisiana to LA 20 where there is another such covered bridge, with fish biting on a cold, overcast day.

Today, with two sons and a daughter grown, fishing is a way to take the stress of the mind. “I go out for about three or four hours,” he says. “It is very relaxing. I remember the first time I caught a sac-a-lait with my son, who was six at the time. He also caught some.”

A Lineage of Swamp Hunters

A true understanding of how to navigate the challenging terrain of the River Region requires years, even generations, of experience moving through submerged aquatics, red maple and fourchette of the Maurepas Swamp Wildlife Management Area. In Garyville, the Hymel family is of old swamper bloodline. Clyde (father), Kerry (son) and Travis (grandson) continue the family tradition.

At 91 years young, Clyde Hymel is retired from the sport, but his legacy remains. “One time an alligator was coming at me with his mouth open,” he says. “I had to stick my rifle in his mouth and pull the trigger until he released his grip.” The alligator involved probably shouldn’t have snapped at such a legend.

His son, Kerry Hymel, remembers the old stories. “Grandaddy was a professional alligator hunter in his younger days,” he says. “They didn’t trap them, they hunted them down. Trailed them through the swamps. In the summertime, my granddad would follow the bubble tracks.”

Alligator hunting was stopped in the mid ‘60s, and re-launched more than a decade later after the population grew enough for a season. “They authorize any landowner to catch it,” Kerry says, adding that he uses mostly chicken leg quarters that have gone stale purchased from the local grocery.

The Hymel’s hunt private land, a lease for which Travis Hymel remembers as started by Clyde Hymel’s father-in-law. “The lease has carried on since then,” says Travis, “Decades and decades of private hunting.”

All of the living Hymels will tell you that they grew up on the land. “In Louisiana,” Kerry says, “Most of us have purchased a lifetime license. Over the course of five years it has paid for itself.”

“We are surrounded by one of the largest public lands, Maurepas Wildlife State Management Area,” says Travis. “You have to have a license, but it is self check-in with three stations spread throughout where you can put in your personal details and then hunt whatever is in open season.”

River parishes are swamp hunting. “It is probably the hardest deer hunting anywhere,” says Kerry. “With water over your knee or up to your waist, it can take eight hours to walk less than a mile. It is a very beautiful technique for oldetimers that did it their whole life.”

Kerry Hymel explains that deer hunting is an all-day thing, but he found, over the years, that deer move better between 11 a.m. and 1 p.m. because they feed a lot. The sun is not in their eyes.”

Kerry shares how the lake tides control the depth, an east or south wind pulls the water in and a north or west takes the water out of the swamp.

The worst part is the water, but, says Kerry, “When you get a really good trophy you can call someone to help you.” For the Hymels, finding a friend is an easy call; someone will happily come help you float your tag. 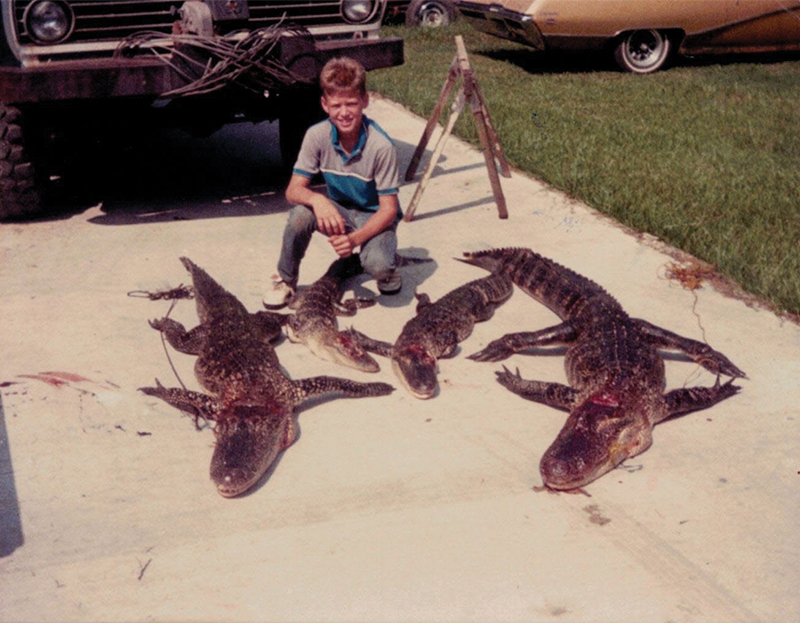 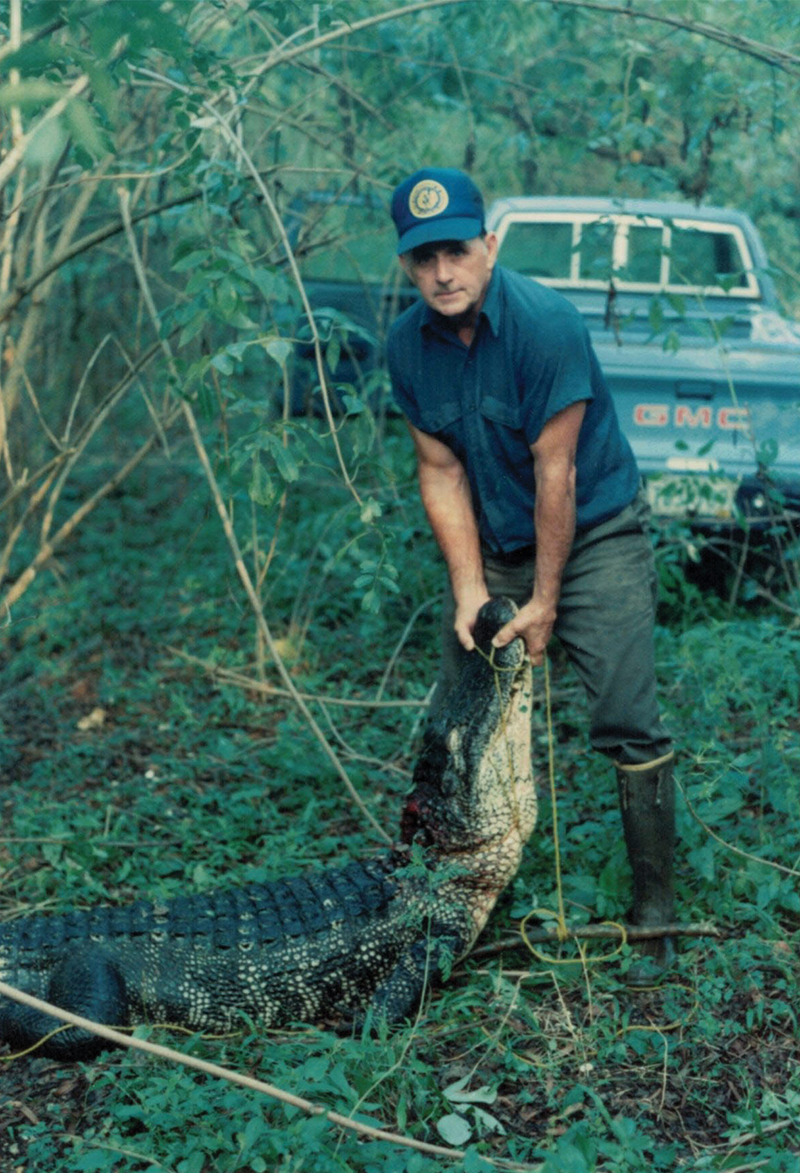 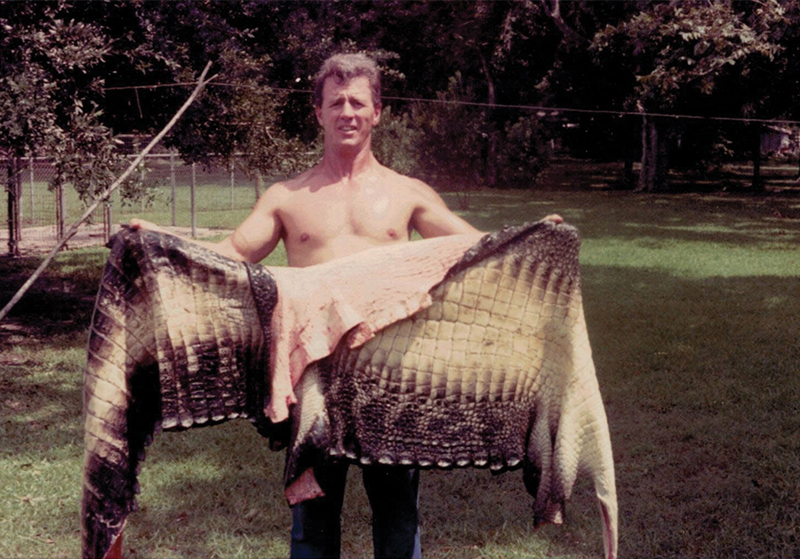 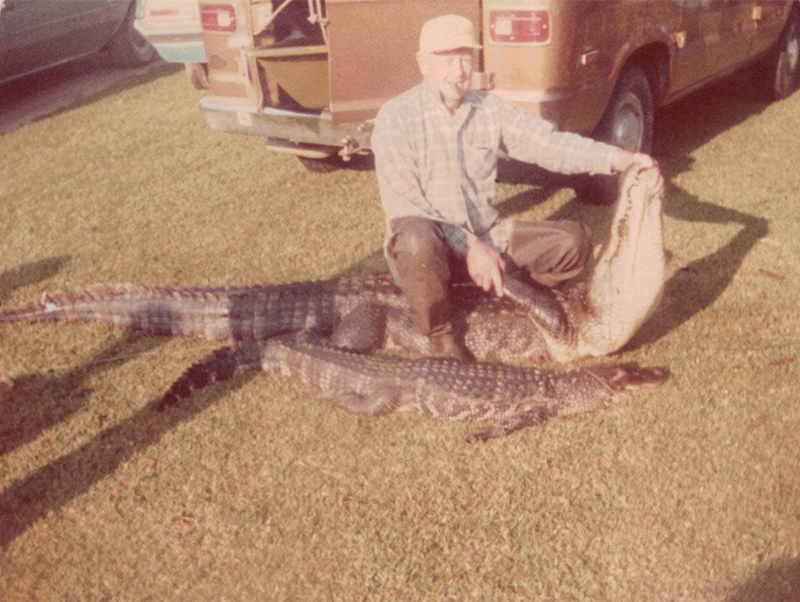