After 143 years, the New Orleans Fair Grounds Race Course continues to overcome challenges, which now include a changing marketplace.

Rhythm rules a certain stretch of Gentilly Boulevard, right where it bends off Bayou Road in the middle of a residential neighborhood. But the source of the pounding depends on when you’re passing by. During the two-weekend stretch between April’s end and the beginning of May, it’s the second-lines, swarming crowds, and stacked lineup of the New Orleans Jazz & Heritage Fest. From Thanksgiving Day to early spring, though, you’re hearing hoof beats in the air.

The New Orleans Fair Grounds Race Course, the third-oldest continuously operating thoroughbred track in the country, was officially founded in 1872 but boasts roots in the opulence of antebellum New Orleans. Today the property, owned and operated by Churchill Downs Inc., hosts two major events a year, with premier attractions including the Louisiana Derby and the New Orleans Handicap, and maintains 11 off-track betting facilities in the metropolitan area. The course has been graced by the likes of Black Gold (winner of the 1924 Kentucky Derby) and Pan Zareta (called “Queen of the Turf,” she won more races than any other mare in the country’s racing history).

But horse racing no longer dominates the realm of spectator sports. The New Orleans Saints and the New Orleans Pelicans call for the attention of everyone from casual fans and tourists out for a slice of local culture to rabid devotees wagging foam fingers. Racing has competition as a gaming outlet too, losing gamblers and their burning wallets to the rise of the casino industry in the ’80s and ’90s.

The question is: How does the Fair Grounds remain relevant and profitable after entertaining New Orleanians for well over a century?

Many have held the reins of the Fair Grounds throughout the years. Called the Union Race Course in its first incarnation, the 400-acre property opened in autumn of 1852 with a pacer race of gray geldings.

From there it became the Creole Course in 1859, and by 1863 the property (called the Mechanicals & Agricultural Fair Grounds or just plain “Fair Grounds” by then) was being used for wartime entertainment: boxing, bull fights, and baseball joined the ongoing horse races (though the prime equine athletes had been sent off to war, too). 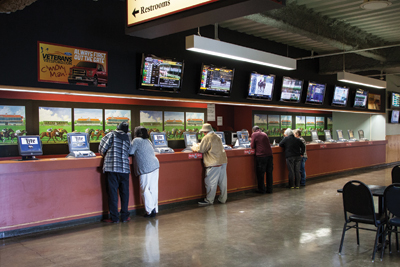 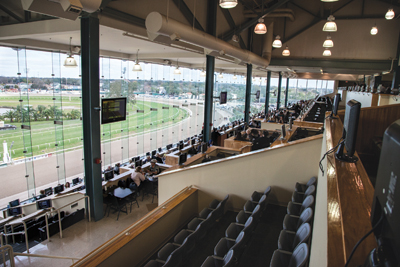 “Thoroughbred racing has failed to keep up with rising competition from other forms of gambling, sports and entertainment,” said a recent report from McKinsey & Co. Photos Jeff Johnston

Faced with a potential lack of racing entertainment in the city, former Metairie Jockey Club members engineered a fundraiser to purchase the Fair Grounds as the New Louisiana Jockey Club. “The Fair Grounds, with its racecourse and clubhouse, form an estate which should be preserved,” reported one local newspaper during the campaign. “It would be a public calamity were this property to pass into private hands and be divided up.”

The track was defeated by another sort of hurdle in 1908, when the anti-gambling contingent successfully passed the “Locke Law” in the Louisiana Legislature, and horse racing was rendered illegal. Seven years later, the law was repealed and racing bounced back, only to be weakened by the Great Depression, which led to lower prizes, or purses, for the race winners and multiple shifts in ownership. 1940 legislation from Gov. Sam Jones placed legal sanctions on racing, forcing the track’s owners to put it up for sale due to the new expenses.

Thankfully for racing enthusiasts, the track was saved from a likely future as a subdivison when the Fairgrounds Corp., a group of New Orleans businessmen and horsemen, jumped into action, with the track’s operations overseen by the new Fair Grounds Breeders and Racing Association.

The track underwent a short closure in 1945, joining race courses across the country in obeying a directive from the War Mobilization Department issued during World War II. But the Fair Grounds’ next serious opponents were all natural.

A 1993 fire consumed the Fair Course’s grandstand in the middle of a racing season. Still, the course persevered and managed to complete the season by erecting temporary facilities.

A new grandstand began construction in 1994, opening to the public as a grandstand and clubhouse in 199X. But when Hurricane Katrina came calling a few years later, in August 2005, the winds ripped the top off the new grandstand. The property flooded, too. 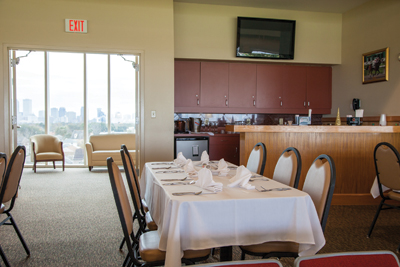 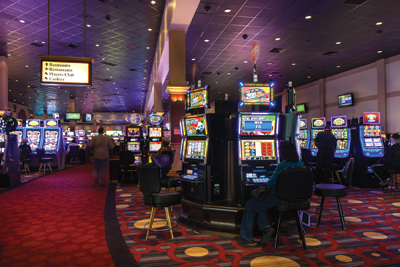 Long ago, the Fair Grounds supplemented horse racing with boxing, bull fights and baseball. Since 2007, gaming revenue has enabled the facility to offer larger purses to racers. Photos Jeff Johnston

But the races didn’t stop. Louisiana Downs in Bossier City, Louisiana, became a refuge for the rest of the season, hosting race meets as “Fair Grounds at Harrah’s Louisiana Downs.” The New Orleans Jazz & Heritage Fest went ahead as planned at the Fair Grounds that spring, and when the racing season returned on Thanksgiving Day 2006, a record crowd of 8,732 people was in the stands to celebrate.

Churchill Downs Inc. purchased the Fair Grounds in 2004, not long before Katrina’s arrival. In 2007, a temporary slot facility was opened on the premises, with a permanent structure established the next year.

“Other tracks had gotten slots,” says Fair Grounds President Tim Bryant. “State legislature passed it many years prior to that.”

Bryant arrived to the Fair Grounds with over 20 years of experience in casinos and gambling. Prior to this position, he stood as vice president of operations and finance at Harrah’s New Orleans.

According to Bryant, adding slots to the Fair Grounds was not just a smart move, but a historically accurate one. “It’s pretty clear when you research the history of it that the horse-racing industry did that often to help supplement purses,” says Bryant.

“Horse racing on its own is a very difficult business to run,” he adds. The income provided by the gross gaming revenue at the slot as well as video-poker machines installed at 10 of the Fair Grounds’ 11 OTB facilities allows the track to offer larger purses for the meets.

“Horse racing on its own is a very difficult business to run.” – Tim Bryant, Fair Grounds President

“It makes it more appealing for horsemen,” says Bryant.

It’s not inexpensive to keep a horse, especially a thoroughbred racehorse whose needs include training and keep, not to mention entry fees and travel. A survey conducted by Thoroughbred Owner View showed that the average costs for an owner in 2014 was $40,423.

The Jockey Club, upon its 1894 establishment, resolved in its mission statement “not only to encourage the development of the thoroughbred horse, but to establish racing on such a footing that it may command the interests as well as the confidence and favorable opinion of the public.” Still true to its word in 2011, the club commissioned a report then from management consulting firm McKinsey & Co. The study, titled “Driving Sustainable Growth for Thoroughbred Racing and Breeding,” recommended greater integrity in the sport, larger field sizes (defined by the number of horses competing in a race), additional TV coverage, and more.

“Despite many laudable innovations,” stated the report, “Thoroughbred racing has failed to keep up with rising competition from other forms of gambling, sports, and entertainment.” Causes for the decline were determined to be poor reputation, limited broadcasts of events, and a dilution of the product.

The core fanbase is on the wane, too. “The people most attracted to horse racing are an older demographic,” says Bryant. “More customers are dying than we’re bringing in. We’ve made a conscious effort to have family days and appeal to younger generation. We don’t want to lose the crowd.” 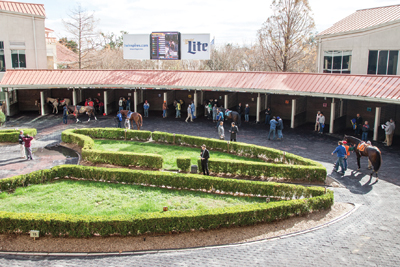 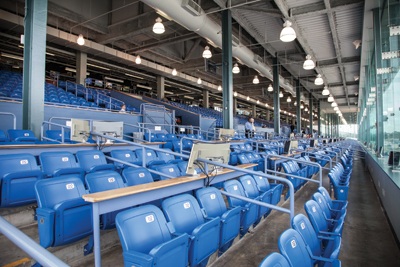 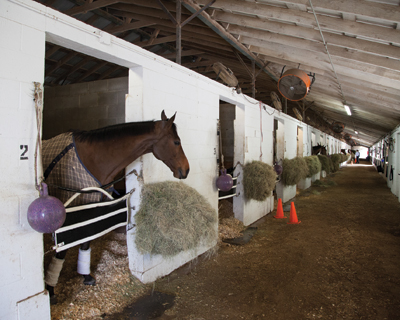 The stern message of the McKinsey report was heard loud and clear by Bryant and fellow members of the racing industry. Changes based on these recommendations, which include simulcasting — in which the broadcast of a race allows wagers at multiple sites, leading to a larger betting pool — have already led to profits and “positive momentum” for the Fair Grounds, according to Bryant.

“There are so many different pieces,” says Bryant of the racing community. “Horsemen and tracks have to get along.”

The Fair Grounds works with the Horsemen’s Benevolent & Protective Association as well as the Louisiana Thoroughbred Breeders Association on ensuring the track’s operations maintain integrity. “We won’t agree on everything, but it’s vitally important that we sit down at the table together,” says Bryant.

Bryant claims there’s one issue that’s clear-cut to all parties: “We need to be a viable industry that’s attractive to many.”

f you come on a big race day, there’s a big crowd,” says Bryant. “But even on a small day, there’s an energy in the anticipation of who’s going to win. People are excited.”

Bryant describes a “pageantry” to the races, extending from the fanciful dress of some audience members to the proceedings on the field. “The horses are paraded through the paddock,” he explains, “and the jockeys mount their horses right on the track. Then when the race starts, you have those two minutes of anticipation.” It’s a singular excitement. “We don’t have 60,000 people like the Superdome, but the vibe and energy we’ve got … well, it’s a cool place to be. It’s a cool place to work,” says Bryant.

Nostaglia adds to the environment. “Tons of people will say they have some kind of memory of the fairgrounds,” says Bryant. “They might not come here more than once a year or once every two years, but they have an association with it.”

The Fair Grounds doesn’t limit its competition to the equine. Included among its more family-centric offerings, the track hosts competitions for exotic animals. “Camels, ostriches, zebras … they all come here to race!” says Bryant. Dachshunds compete too, though it’s safe to say no jockeys are involved.

The track holds Family Days designed to add variety to the crowd. “Kids will climb stuff. They’ll jump up and down,” laughs Bryant. He hopes a day at the races will continue to appeal to a wider audience, “whether you’re an avid bettor or a family.”

“We want to continue to redefine and come up with different ways of entertainment,” he adds.

In addition to watching the races, there’s the clubhouse for dining, the slots if you’re on a lucky streak, or even the large grandstand area, where people-watching the eclectic crowd should keep you occupied. “You’re betting against each other, too,” says Bryant, of the audience experience. “You’re not betting against the house. You’re not betting the Fair Grounds.”

Founded in 1970, the annual New Orleans Jazz & Heritage Fest held its first two events at what is now known as Armstrong Park but moved to the Fair Grounds in 1972. It’s been there every year since.

Once the thoroughbred meet concludes in late March or early April, the grounds are handed over to the festival organizers. “It’s amazing how they convert it,” says Bryant. 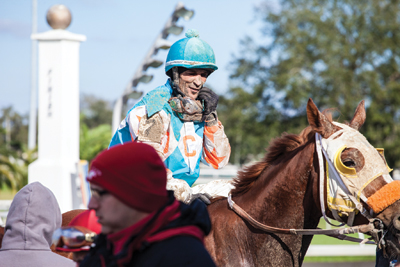 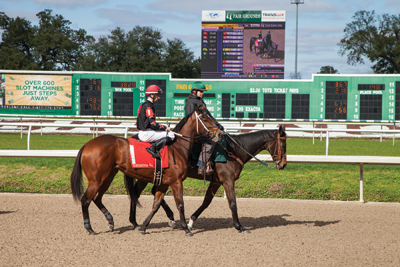 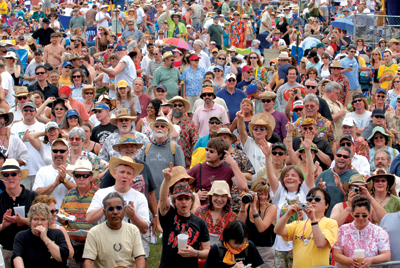 Over the decades, the Fair Grounds has conquered financial and legal battles, as well as war, fire, flood and now an aging customer base. Photos Jeff Johnston and Cheryl Gerber

The Fair Grounds handles beverage operation for the festival but leaves the rest of the popular experience in organizers’ hands. “We hope that it raises awareness of the Fair Grounds,” says Bryant. “We can say ‘Home of Jazz Fest.’”

With a successful thoroughbred meet in 2015, and a new year in the same vein, Bryant has a rosy outlook on the Fair Grounds’ future. The conscious forward motion wouldn’t be possible without respect for the track’s long history in Mid-City.

“We’re a racetrack that sits in the middle of three different neighborhood associations. It’s important to us to be a good community partner,” says Bryant. “And we want to continue to be a part of the fabric of this community.”