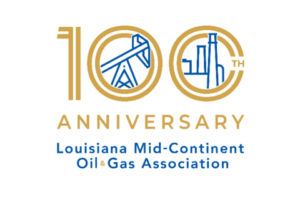 BATON ROUGE – The Louisiana Mid-Continent Oil and Gas Association has announced its centennial anniversary. Jan. 4 marked 100 years since the association’s founding in 1923. To celebrate, LMOGA will host several events in 2023 including an annual meeting, regional receptions and 100-year gala set for late March in New Orleans.

For the last century, LMOGA has advocated for the energy industry in the state.

“For more than a century, Louisiana’s oil and natural gas industry has set the standard in innovation and energy production and LMOGA has been a partner every step of the way,”  said Tommy Faucheux, LMOGA president. “From the very first offshore rigs to the incredible advanced technology in use today, it’s amazing to see what the hardworking people of Louisiana’s industry have accomplished.”

Faucheux said the oil and natural gas industry has been an economic driver for Louisiana for decades. He said it leads the way for sustainable technologies and new energy solutions while providing jobs for tens of thousands of families in Louisiana. According to a 2020 report, for every job created in the industry, 1.4 more jobs are created elsewhere in the state. In 2019, more than 249,000 Louisiana jobs could be attributed to the industry’s presence in the state.

“In 2023, we are embarking on a pivotal election year and our industry will have several opportunities to grow Louisiana’s workforce, leverage new technology and play a role in securing American energy independence,” said Joel Noyes, chairman of the LMOGA board of directors. “It’s an exciting time to be a part of Louisiana’s energy industry – we’re working on large-scale, groundbreaking projects that will help protect America’s national security while benefiting our economy, our environment and our communities.”

Entergy Louisiana Customers to Cover $1.5B for Ida Repairs