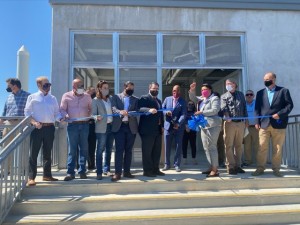 “We continue to meet our residents where they are, and particularly those that utilize this special place everyday, ”said Mayor LaToya Cantrell. “We are excited about these huge improvements that are a true reflection of the additional investments made to restore our most critical infrastructure with the necessary hazard mitigations measures in place to keep residents safe. This is a true indication that we are not just talking about getting things done, we are delivering!”

Repairs and restoration of the marina were deemed necessary due to the severe damage sustained during Hurricane Katrina. FEMA originally awarded the City $10 million to repair and restore to pre-Katrina conditions. However, FEMA ultimately increased the appropriation to $25 million. This allowed the City to construct a floating dock marina that rises with the tide during major weather events.

In October 2019, Mayor Cantrell broke ground on a nearby $5 million Breakwater Drive Improvements Project near the Lakefront. This includes repairs to the roadway, installing ADA-compliant curb ramps at intersections, adding riprap rocks and retaining wall on both the north and west berms, rehabilitating the parking areas along Breakwater Drive, and rehabilitating the boat launch area and parking lot. This project is estimated to be competed in 2022 and is part of a total capital projects investment in City Council District A of approximately $73 million.