In the game of life, you can’t play on the sidelines. You’ve got to get in the game.” This philosophy guides the business practices of Karl Turner, President of A La Carte Specialty Foods, and was intrinsic in his founding the company in 2003.

Turner had a vision to start his own business and was able to build on his experience in the Louisiana seafood industry to begin A La Carte. He is the majority owner and works closely with his partner Edward Lee in their Westwego, Louisiana, headquarters.

“We are primarily in the value-added seafood business, and by value-added I mean ready-to-cook,” explained Turner. “I have a network of brokers throughout the United States, and I’m involved in pushing sales and making sure the brokers have what they need.”

A La Carte finds its success with a small and committed team of five employees, as well as via partnerships with their seven brokers. The company specializes in seafood and focuses specifically on oysters, shrimp and crawfish. They offer product lines for restaurants and the food service industry, as well as direct retail for home cooks.

“Our leading product is a breaded oyster we import from China. We worked with a New Orleans chef to create the breading. It was the first product we developed. At first it was a panko breading but we wanted the product to look more ‘homestyle.’ The breading made it unique. It’s par cooked and individually quick-frozen. We developed a niche and are the leading importer and distributor of this product,” said Turner.

One current product about to be revamped is their “Sauté Your Way” shrimp dinners sold in retail markets. The product has been packaged and sold as frozen shrimp separate from an included sauce packet. But now they are improving the product to combine individually quick-frozen shrimp with sauce pellets and fire-roasted vegetables for a complete frozen meal that is ready for microwave or stovetop preparation.

A La Carte uses the Port of New Orleans for both imports and exports and values the customer service and local aspect of shipping via New Orleans. Turner shared this story about a key learning experience in shipping to China: “We had prepared a container for export to China through the Port of New Orleans. We found out after it was loaded and shipped to the Port that some of the markings on the boxes would not be acceptable to the Chinese regulators. We had to make arrangements with our forwarder (J.W. Allen & Company) and the Port to take the container off the ship and back to the plant to repackage. If we had been in Houston, this would have been a real problem. That was a service that helped us a lot. They went out of their way to be helpful and it saved us a lot of money.”

Beyond their location in Westwego, A La Carte also operates a plant in Simmesport, Louisiana, where they process freshwater fish for export to China via the Port of New Orleans. It’s a recent addition to their portfolio and they are looking to grow that business. Turner pointed to the convenience and cargo handling capabilities of exporting through New Orleans, highlighting the New Orleans Cold Storage Terminal as important to their operation in keeping their products frozen.

Future growth in the game of seafood is assured with Turner at the helm. New products are already in the testing phase, with a focus on domestic breaded shrimp. Additionally, research is being done on importing squid and octopus from new markets in Africa.

Looking ahead, Turner said, “Growth will focus on the value-added side of things, and we could very well use the Port of New Orleans for new imports. We like the convenience and service, and we want to support local.” 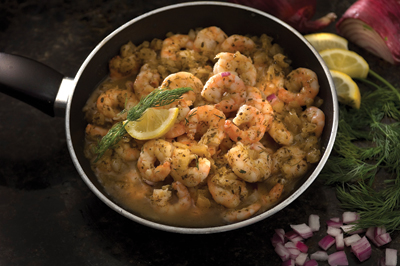 Ready-to-cook Louisiana shrimp in a sauce developed with the late Chef Paul Prudhomme is part of A La Carte’s “Sauté Your Way” line of products.