Entrepreneur Tom Fischmann discusses the meaning behind his eclectic collection of cufflinks.

“Cufflinks are fun because they add a very personal statement to an outfit,” explains Tom Fischmann, an entrepreneur who is currently working on a new health and fitness venture which will be a centerpiece of a mixed-use development in Mid City. “Cufflinks can communicate a thought, a mood, or an idea that is specific to the day or event. You never know who will notice your cufflinks, but they are a great conversation piece once they catch somebody’s eye.”

Fischmann’s collection is extra special because they once belonged to his father who passed away when he was a young boy.

“Much of what I know about him is a composite of what I’ve been told by others. By all accounts, he was larger-than-life personality who was generous to a fault and had amazing business vision,” Fischmann says. “He developed real estate, collected art, and operated several businesses, including a very successful printing operation.” 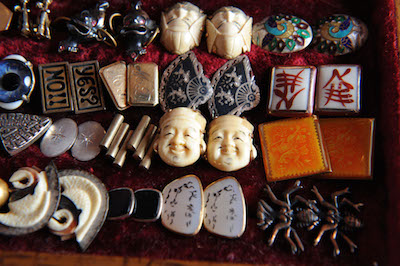 Fischmann says his father traveled all over the world and had friendships with the unlikeliest people. “My father’s collection of cufflinks touches on his interests, his travels, and certainly on his sense of humor.”

When Fischmann talks about how he used to race to pick out cufflinks for his father to wear to some special event or occasion, it’s obvious his memories are etched in his mind.

“He was a very sharp dresser,” he says. “He wore suits all the time. I grew up in St. Louis and I remember when he would take me to the Blues hockey games and we would wear a coat and tie. In between periods, we would hang out in the Goaltender’s Club where all the men were smoking and drinking cocktails and talking business and hockey. It was very Don Draper," he adds, referring to the star of the Mad Men television series.

He keeps his valuable cufflink collection under lock and key.

“They are in a bunker guarded by several hungry Doberman Pincher dogs,” he says with a smile. “While some may have real monetary value, most are more sentimental. For example, I have a pair of cufflinks that are carved ivory masks, which are beautiful for their intricacy or workmanship, and a pair of tiny Colt 45 pistol replicas with mother of pearl handles, sterling silver baseball bats and some vintage automobiles that are special to me. Then there are others that are just fun, such as the brass pair of drunks hugging light poles.”

Although Fischmann’s day-to-day work schedule allows for casual clothes, he still enjoys dressing up from time to time.

“One of the joys of my collection has been giving them away for special occasions to my friends,” he says. “When a friend moved to Dallas, I sent him a pair of oil rig cufflinks. My brother-in-law sells high-end real estate in San Francisco and I sent him a pair with white standard poodles that he constantly receives comments about. When another friend made a big deal to scale up his accounting firm, I sent him some vintage cufflinks with tiny adding machines.”

Most of all, Fischmann says he loves the nostalgia of wearing his father’s cherished cufflinks.

“It keeps my memories of my father ever fresh in my mind, and now my children – Georgia, Camille and Alex – love to pick out just the right cufflinks they want me to wear.”