Greg Gremillion of CellarDoor talks about the choice to rescue an old historic building to house his dream restaurant and cocktail lounge.

When New Orleans native Greg Gremillion decided to open CellarDoor – a restaurant and cocktail lounge – in 2011, he made a bold choice; he bought the building.

While most restaurateurs and entrepreneurs will tell you that renting is the best option until you know your business is profitable, Gremillion has a different take.

“In the long term, if I pick the location wisely then I’d at least have an asset to fall back on,” he says.

Gremillion selected a decrepit old building called the Swoop-Duggins House on Lafayette Street that he says had been ignored for years. Built around 1830, the three-story brick house appealed to Gremillion, not only for its history, but for the fact that the quiet, and somewhat hidden location offers an air of mystery to CellarDoor.

“I did much of the work myself over the next couple of years, sort of developing the building from the top down… all the while with the intention of opening this place,” he says.

According to CellarDoor’s website, the Swoop-Duggins house is possibly one of the oldest houses remaining in downtown New Orleans, and is home to a few ghosts as well.

CellarDoor serves hand-crafted cocktails, and while the location may appear quite fancy upon first glance, they are open at 9 a.m. for all home Saints football games.

Gremillion – who lived in the U.K. for a short time – says that his love of the modern art scene in London heavily influenced the interior art at CellarDoor.

“I did my graduate degree at King’s College in London,” he says. “I have an M.A. in cultural and creative industries, and in doing that I was very immersed in the contemporary art scene. I’ve always had this concept that the visual art component of this place would be very important and so I’ve been partnering with this art gallery that I worked with in London. The majority of our art comes from there.” 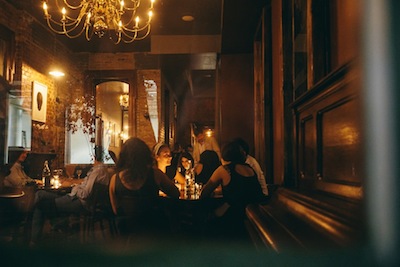 CellarDoor had a bit of a rocky start.

“The chef I thought we had in place for a few years got offered another job right before we were about to take off,” Gremillion says.

Out a chef just a few weeks from the restaurant’s opening, Gremillion’s wife insisted he look at some photos a high school friend of hers had been posting on social media of dishes she’d been making for private catered events. That old friend was Chef Arcega.

“At the same time, I was really interested in bringing something Eastern to the table as far as food goes and Jamielyn is from the Philippines. One look at her food and I knew.”

Gremillion says that the biggest challenge in opening CellarDoor was finding the right core group of people to support the concept.

“The idea of opening a restaurant and a cocktail lounge was something I’ve personally wanted to do for a very long time,” he says. “But it was something that was always very fleeting and very hard to make happen. Finding the right group of people was probably the hardest thing in getting it open, but now that we’re open, we have luckily had great success in the first five months.”

Gremillion says that CellarDoor has shown profit since day one – a feat that he acknowledges is very rare in his industry.

Germillion has his eye on the long haul.

“I don’t want this place to be trendy,” he says. “I want it to be classic and timeless.”

“We have the very small, dimly lit sign,” he explains. “The building is very unassuming. Instead of entering through the front door, we chose to make to make the entrance on the backside so you have to walk through the alley way. I think once you experience that, it’s something that’s fun to talk about.”