NEW ORLEANS — The owners of a popular New Orleans-based cutting board, countertop and custom furniture business have decided to take their store concept on the road — and they mean that in the most literal sense of the phrase.

NOLA Boards owner Mandy Simpson and husband/business partner Daren Sumrow have commissioned Chicago-based Advantage Trailer to build them a retail store on wheels that they plan to use to test the market for their concept outside of New Orleans. They will unveil the shiny new mobile retail pop-up shop, which is still under construction, in late spring or early summer 2023 in Nashville, Tennessee. They have their eye on an outdoor space in the city’s bustling 12 South neighborhood. 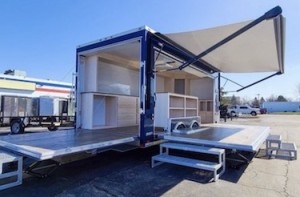 Still under construction, the Nash Boards pop-up shop will debut in 2023. (Photo courtesy of NOLA Boards)

The store on wheels, which will be pulled by a separate vehicle, measures about 16 feet wide by 35 feet long when open. It will hold shelves and counters to display merchandise and drawers to store additional stock. It will be customized and designed to create a Nashville spin on the look and feel Simpson created at the original NOLA Boards brick-and-mortar location.

“We love New Orleans, and we are keeping our flagship store here on Magazine Street,” said Simpson during an interview for this week’s Biz Talks podcast. “However, we are expanding the concept of our cutting boards and locally made products to other cities.”

It’s obvious she’s excited about the new venture — and the deluxe new mobile shop in particular.

“I don’t like calling it a trailer because that sounds too simple,” she said. “It’s going to be much more than that. … I’m a child of the 90s, so I have to compare it to ‘Transformers.’ It’s like a food truck that opens on the sides.

“We will be using it to test new markets in other foodie cities similar to New Orleans. It will be the same concept as NOLA Boards in terms of what we carry but different in terms of who the actual makers are. That means we will have Nashville-area woodworkers making the boards and we will carry pantry, bar and kitchen products from other local vendors.”

This is the latest chapter for a business that began in 2014, after a moment of serendipity.

“I was in a completely different career as a social worker at Ochsner,” said Simpson. “And Daren, who has been a woodworker for many years, was working on other big residential and commercial projects. One of our friends asked him to make a cutting board for a wedding present, and I posted a really pretty picture of it online.”

The post got an immediate reaction. Friends and family saw the design and asked if they could order one of their own. For Simpson, it was a moment of inspiration. 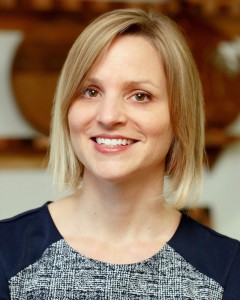 “I thought this could be a really good side hustle, so we made a few more and brought them out to farmers markets and things like that,” she said. “And, I mean, the first batch just sold out almost immediately so we kept doing it. And a few months later, it was expanding and I couldn’t really keep up with doing my own job and handling this. So, as I was trying to take phone orders in the hospital bathroom, I decided I had to make a decision.”

Only a few months after taking the leap, Simpson got a phone call from representatives of celebrity chef Rachael Ray, who’d found the product online and decided to make NOLA Boards its “No. 1 gift to give” in a 2015 holiday guide. In 2016, Simpson opened her first brick-and-mortar store in the 4300 block of Magazine. The company earned additional promotion, in 2018, from “Good Morning America.” Then the new Magazine flagship location opened in 2020. The pandemic and its aftermath presented challenges, of course, but the loss of business from weddings and corporate events was balanced by more orders from people spending so much more time in their kitchens.

Over the last five years, Simpson experimented with locations in the French Quarter and Baton Rouge but ultimately closed those to focus on the Magazine flagship and online business.

Together, NOLA Boards and New Orleans Woodworking employ nine team members. The retailer’s product line has grown from the original cutting boards to include butcher block countertops, dining room tables and other furniture.

The new mobile pop-up is just the latest example of Simpson’s knack for dreaming up big ideas and putting them into action, although this one requires patience as she waits for things to come to fruition.

“Nash Boards is the first step and it’s a great way to test out a new market,” she said. “And then we’re really looking at Austin and Charleston and places like that. [The trailer construction] is going to take a while. Everything right now takes a while. But everything’s slowly morphing together for next year.”