As Drew Brees’ returns so do Saints’ Super Bowl aspirations. 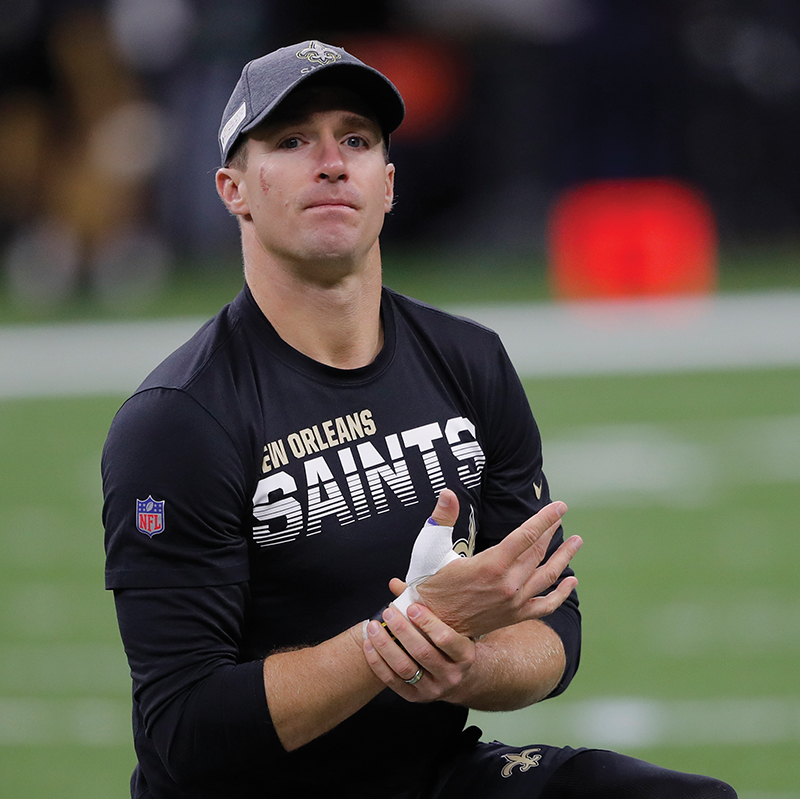 What a difference a thumb can make: New Orleans awaits the return of Drew Brees

With four divisional games against NFC South opponents this month, it’s nice to know the New Orleans Saints offense will be getting back to full strength with the return of quarterback Drew Brees. The field general, of course, was sidelined in September and October following a Week 2 thumb injury and subsequent surgery that kept him on the sidelines for almost half of the regular season.

With Brees out, Teddy Bridgewater proved why the Saints made him the highest paid back-up QB in the NFL this season. While his numbers weren’t eye-popping, he was very efficient and led the Saints to some unexpected victories. Even with the action on the field, fans and television cameras have focused on Brees during games, flexing his surgically repaired thumb to help regain a full range of motion, offering advice when he could, and looking like a mere mortal sweating out the uncertainty of the game in front of him.

Over the past several weeks, fans and teammates have listened as Brees reported on his recovery milestones: brushing and flossing his teeth, picking up a glass of water, and every other step he and his recovering digit have made to return to game readiness. Throughout, he has said that he has taken the recovery one day at a time, even telling WWL Radio last month that he was “not rushing back just for the sake of rushing back. I’m trying to get back as quickly as I can, as healthy as I can and as effective as I can.”

He is smart enough to know that he is far more valuable to this team if he is as close to 100 percent as possible, but he didn’t want to rush back for fear of reinjuring himself or being a weak link.

Bridgewater did not have to move heaven and earth to keep this team in the thick of a playoff race. Brees — or Breesus, as he’s affectionately known — won’t have to be a messiah figure to salvage the season in order for this team to qualify for the playoffs. Now that he has apparently fully recovered, the Who Dat Nation will again feel it is OK to resuscitate their preseason dreams of a possible February trip to Miami for Super Bowl LIV.

While no Saints fan wished for the injury, there is a silver lining to the dark cloud of losing the greatest Saint to ever wear the uniform in the early half of the season. Brees, 40, will be well rested as he competes through the rest of the regular and postseason. The offense notoriously faded down the stretch after Thanksgiving last year. Many argued that the quarterback’s arm looked like it had the strength of boiled spaghetti, making him unable to hit on the deep ball for which he gained renown in New Orleans.

Before the season kicked off, many Saints experts argued this team was one of the best to be assembled in franchise history, and may be as good — if not better than — the 2009 and 2011 squads. They argued that if they could remain healthy that this could be a special year.

Brees is one of the best quarterbacks to ever play the game. He comes back into the huddle fresh, without weeks of bumps and bruises normally gathered during a full campaign. The scene is set for him to return under center and complete what could be one of the greatest storylines in the NFL’s 100-year history.

The Saints did better than expected while the face of the franchise was sidelined. Now, No. 9 is in prime position to lead the comeback of all comebacks and make this team’s ultimate dream come true.