Kat Williams spent a week in New Orleans with her boyfriend Rafael Cruz before travelling to Columbia, South America, where they plan to relocate and open a restaurant.

The 27-year-old wanderluster currently lives in Maryland and has stayed at more than 70 hostels throughout America, Dubai and Turkey and during her backpacking days through Europe.

Without reservation, she said the Auberge NOLA Hostel stands out.

“The Auberge sets itself apart by its environment, atmosphere and events,” said Williams. “I was shocked to see how well-operated this hostel was. Usually you don’t see that in the U.S. The Auberge is like a hostel you’d see in Europe. It’s super social. They arranged nighttime activities for us and got us in groups and showed us around the city. We’re guests, but you feel like a local when you stay at the Auberge.”

The Auberge NOLA is located at 1628 Carondelet St. (on the corner of Robert C. Blakes Sr. Drive and Euterpe Street), one block away from the St. Charles Avenue streetcar line. It bills itself as New Orleans’ first ‘boutique social accommodation,’ and according to Hostelworld.com, the world’s leading hostel-focused news and online booking platform, the Auberge NOLA checks in as the No. 1 rated hostel in America for 2016 and 2018. The Auberge NOLA also won an additional annual HOSCAR award for being ranked the second best hostel in all of the North America continent for 2018.

“When I opened up the Auberge in 2013, there were only five or six hostels operating in New Orleans,” said Auberge NOLA Hostel owner Robert Weinstein. “Now there are 11 with more on the way. I come from a hospitality background, and I saw a niche.”

Forbes recently reported the hostel industry is projected to grow seven to eight percent year-over-year, and is currently valued at $5.2 billion in bed revenue. Louisiana native Weinstein, 35, said he sees a beneficial shift in the hostel industry in that big investors are entering the market and showing its true potential for the first time.

“We’re seeing a rise in the number of hostels in New Orleans and all around the country,” said Weinstein. “They’ve always been around, but what you’re seeing now is big developer groups seeing this model as profitable. They’re building social hotels which is another name for hostels. They’re just getting into the game, and it’s helping to spread the word about hosteling in the U.S. market, targeting a whole new generation of travelers and changing the whole scene. With the help of these bigger developments, it’s shining a light on our whole industry, especially for domestic travelers who may not be as familiar with the hostel concept than the international ones.”

The Auberge NOLA is a 19th century two-story galleried Lower Garden District home. With 34 beds that cost an average of $33 a night, accommodations include five shared bunk bed rooms and bathrooms with one female-only dorm room and two small private apartments with en suite bathrooms.

“People are more willing to share nowadays with Uber and Airbnb,” said Weinstein. “These companies are bringing more awareness to the sharing economy. Hostels have been around for a long, long time in other parts of the world, in Europe and Asia and South America. In the U.S. we’re just catching up. When you used to say ‘hostel,’ people would give you a sideways glace and express concern for their safety and say, ‘Are you really going to stay at a place like that?’ We’re helping to change that image and the industry as a whole, and there is a lot of room to grow. There is a better understanding of what hostels are now.”

Weinstein said while his leisure lodgers appreciate the value of budget travel found at the Auberge NOLA, the hostel’s success rests on the unique atmosphere it provides. According to Hostelworld’s first ever Hostel Trend Report, millennial travelers are fueling a hostel revolution with their proclivity to spend money on distinctive experiences they can capture in a picturesque Instagram post.

“The younger traveler is more in tune with shared experiences,” he said. “Immediate friendships are made, and a common bond is formed. They’re all travelling in new places together, and we encourage them to all get together as a group and they feel safety in that number. At standard hotels, there’s little encouraged interaction and you tend to feel alone, like you’re traveling all by yourself. A real hostel experience includes atmosphere and the social environment. We really want people to enjoy the social part of hosteling, encouraging guests to get together at the intimate gatherings we provide.”

“I was here a year ago, and I stayed in four different hostels,” said Auberge NOLA repeat patron Williams. “Auberge was the first and the best. Even when I left the hostel to stay at the others in the city, it was like I never left because they invited me back to join the group. The Auberge set the bar so high that I was disappointed with all the other hostels I stayed at in town. At the other places, you do your own thing, and it was a real bummer. At the Auberge it feels like you’re best friends and part of a family.

“Nothing compares to the hostel and its focus on atmosphere,” she said. “It’s a big house, and there’s tons of space and there are a lot of people around. You meet people from everywhere, become best friends, and the next thing you know you’re off to Spain to stay with that friend you met at the Auberge.”

Auberge NOLA’s Weinstein said his vacationers tend to travel three to six months at a stretch and are very budget conscience. He said he accommodates visitors of all ages but he books a lot of beds for younger travelers, between 18 and 35, because New Orleans is still known best as a “party destination.”

“From the moment our guests walk in, we give them tons of suggestions about what to do and where to go,” he said. “And at night, everyone gathers for a social event, they all meet each other and socialize and go out together to different destinations. We show them a lot more than they think is out there. Everyone who comes to New Orleans knows about the French Quarter and Bourbon Street, but we tell them about and show them around other parts of town.”

Weinstein said the typical weekly schedule includes an outdoor barbeque at the hostel on Mondays, a trip to The Maple Leaf on Tuesdays, a tour of Magazine Street on Wednesdays and a stop at Le Bon Temps Roule on Thursdays.

Weinstein said only five percent of his customers drive to get to his hostel in New Orleans and access to local transportation is key for his clientele. Auberge NOLA upsells the hostel’s location, which includes an enviable one block proximity to the St. Charles Avenue streetcar line, and exploits its biggest asset – that New Orleans is a “small big city.”

“We show our guests the way to get everywhere they want to go to by foot or by streetcar in 20 minutes in every direction,” said Weinstein. “And within a five block radius, our hostel guests have access to more than 31 restaurants and bars, several of which are open 24 hours.”

Weinstein said bringing people together in affordable ways is easy for Auberge NOLA because the nearby streetcar affords his hostel clients easy access to check out Canal Street, the French Quarter, the cemeteries, The Outlet Collection at Riverwalk, the CBD, the multiple museums in the Warehouse District, the Convention Center, Frenchmen Street and the Marigny in one direction and the Garden and University Districts, the stately homes along St. Charles Avenue, Audubon Park, the Audubon Zoo and the Black Pearl neighborhood in the other direction.

Weinstein also encourages his guests to walk around town, asserting the Auberge NOLA is a 20 minute walk away from most of the above plus Coliseum Square Park, Magazine Street, the Mercedes-Benz Superdome and the Smoothie King Center.

“When you first get here you may think you’re too far from the French Quarter,” said Williams. “But when you’re greeted they tell you all about New Orleans and all the different neighborhoods to visit and give you lots of info. You find out pretty quickly that you’re really in the middle of everything the city has to offer from Audubon Park to the Bywater. At other places they give you a map and basically say ‘good luck.’ Here, they take you on an adventure.”

“Running a hostel is a good small business to get into, but it’s an hands on business,” said Weinstein, who lives next door to Auberge NOLA. “Anyone can do it if they’re not afraid of hard work.”

Weinstein said he and his two employees cater to a 70-80 percent daily occupancy rate for guests who stay an average of two to four nights. He said the Auberge NOLA offers many free amenities including a shared kitchen space, free breakfasts, wi-fi, towels and linens, lockers, public computers and a printer, a communal courtyard and common areas, access to games, music, Netflix, TV and a movie room and nightly social events as well as organized group excursions around town.

Auberge NOLA regulars Williams and Cruz are documenting their three-month trip to Columbia on Instagram, and are looking forward to learning about the Columbian culture. When they return stateside, they are eager to come back to the Auberge NOLA.

“The most important thing I could say about the Auberge is that they make you feel like friends, family, and the place is a home and you feel like you’re at home. People there care about everyone’s well-being. They do an awesome job here because they care.” 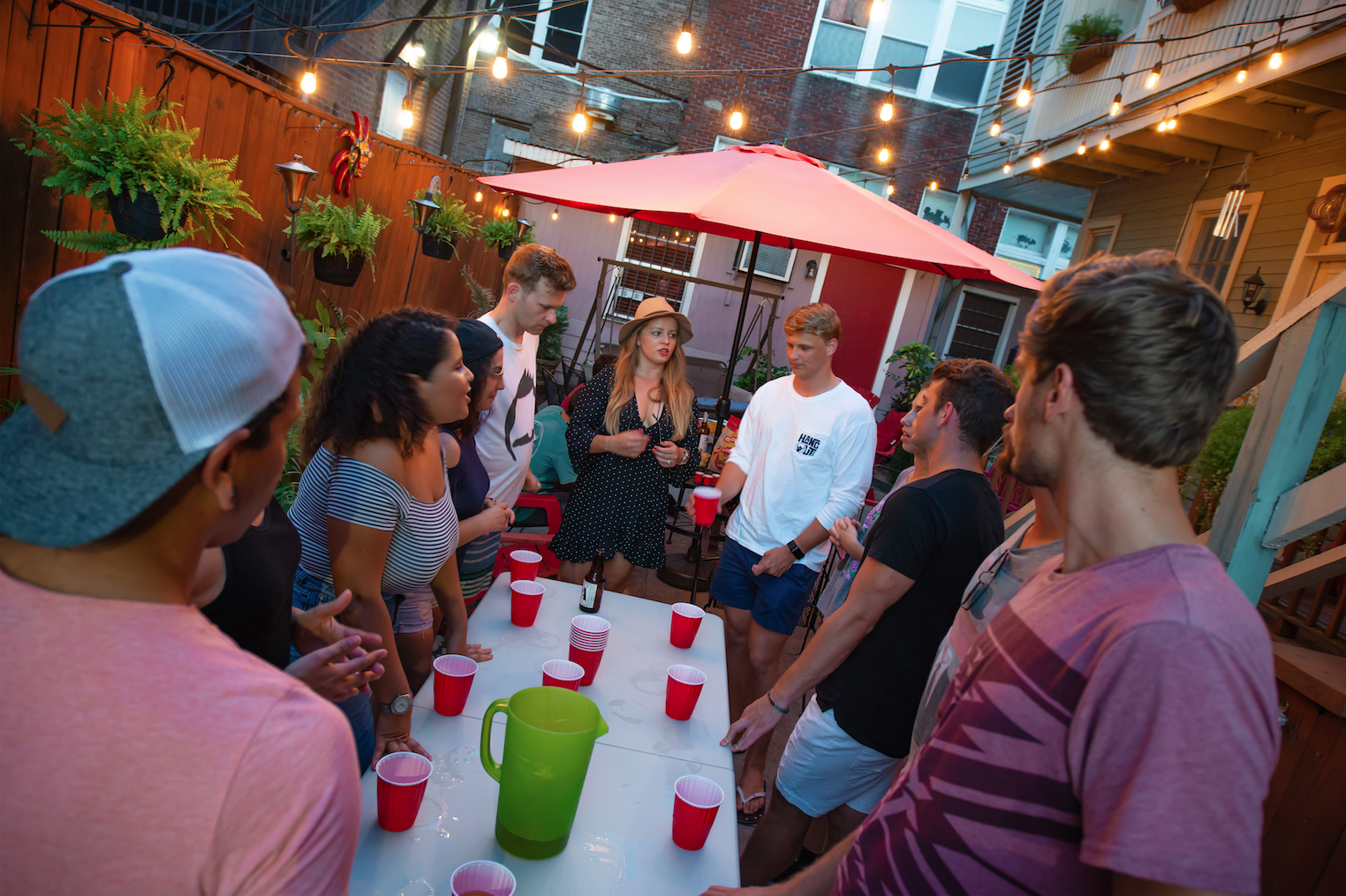