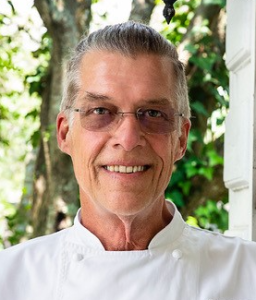 NEW ORLEANS (press release) — The New Orleans Wine & Food Experience has announced that the 2022 Ella Brennan Lifetime Achievement in Hospitality Award will be presented to legendary chef Frank Brigtsen. The gala celebration will take place at 7 p.m. on June 7 at the Four Seasons Hotel New Orleans.

“Chef Frank is more than just passionate about cooking; he is passionate about New Orleans and Louisiana,” said Aimee Brown, NOWFE executive director. “He is so well-respected by both those in the restaurant industry and the general public that he deserves the unofficial title of ‘the chef of chefs.’ His 50-year career has made an indelible mark on the hospitality industry, and we are humbled to bestow the Ella Brennan Lifetime Achievement in Hospitality Award upon chef.”

Chef Frank and his wife Marna are the owners of Brigtsen’s Restaurant in the Riverbend neighborhood of Uptown, New Orleans. Chef Frank’s culinary career has spanned 50-years, beginning in 1973 while he attended Louisiana State University. He apprenticed at Commander’s Palace Restaurant under the guidance of Chef Paul Prudhomme in 1979. When the restaurant began dinner service one year later, Chef Frank became the first Night Chef at K-Paul’s Louisiana Kitchen. During his seven-year tenure with Chef Prudhomme at K-Paul’s, Chef Frank attained the position of Executive Chef. Paul and the late K Prudhomme were instrumental in helping Chef Frank and Marna open Brigtsen’s in 1986.

Chef Frank has received numerous local and national accolades throughout his 50-year career. He was named one of the Top Ten New Chefs in America by FOOD&WINE magazine (1988) and America’s Best Chef: Southeast by the James Beard Foundation Awards (1998). He was also named Chef of the Year by New Orleans Magazine and Restaurateur of the Year by the Louisiana Restaurant Association – N.O. Chapter. In 2012, Chef Frank received the Lafcadio Hearn Award from the John Folse Culinary Institute and was inducted into the Hall of Fame by the Louisiana Restaurant Association. In 2016, Chef Frank received the inaugural Paul Prudhomme Award from the American Culinary Federation. Brigtsen’s Restaurant was voted Top Cajun Restaurant, Top Service, and Top Wine List in the annual Zagat Survey. In 2001, Brigtsen’s received the distinguished Ivy Award from Restaurant & Institutions magazine. In 2016, Brigtsen’s was named one of the Top Ten Restaurants in New Orleans by Brett Anderson, writing for The Times-Picayune newspaper.

Chef Frank’s passion is teaching and sharing through food. For 15 years, he taught public cooking classes at the New Orleans Cooking Experience, sharing his love for America’s greatest regional cuisine. He also teaches Contemporary Creole/Acadian cuisine as Adjunct Professor at the John Folse Culinary Institute at Nicholls State University. He serves as the inaugural Chef-in-Residence for the Culinary Arts program at the New Orleans Center for the Creative Arts (NOCCA).

Tickets now available at nowfe.com for $150 per person or $1,500 per table of 10. VIP tables for 10 are also available for $2,500, and VIP a la carte tickets are available for $250 which includes entrance to the VIP reception from 6 – 7 p.m. Proceeds from the awards gala benefit the many local non-profit organizations NOWFE supports throughout the year.