NEW ORLEANS – After analyzing millions of reviews that former and current workers left for employers, job website Indeed.com reports New Orleans has the 6th most satisfied, happy workers in America.

The top ten cities for happiest workers include: 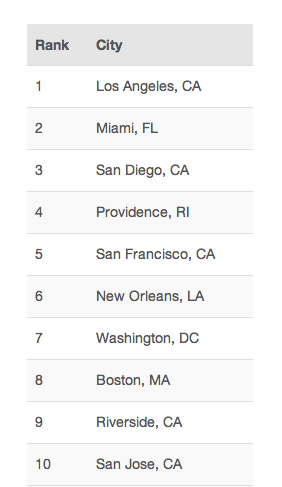 Indeed.com asks and reports, “‘What makes us happy at work?’ Given how much time we spend at our jobs, this is a crucial question. After all, as Confucius said: ‘Choose a job that you love, and you will never have to work a day in your life.’ But that was 2500 years ago, and even today people still disagree on the nature of job satisfaction. To make things trickier, definitions of happiness vary from person to person and across cultures.”

Indeed.com reports millions of job seekers use Indeed every day to search for the job that’s right for them. They also research the companies they are considering by using Indeed Company Pages, which are home to 10 million employer reviews—the largest online resource of its kind in the world. On Indeed Company Pages, current and former employees can assign companies an overall ranking from one to five stars, as well as rate them individually by these additional five measures: management, job security and advancement, culture, work-life balance and compensation and benefits.

“Through a cumulative analysis of those reviews,: Indeed.com reports, “we are able to shed light on how people feel about their jobs all over the world and explore the question of what makes us happy. In this report, we rank 35 countries for overall job satisfaction and provide an in-depth look at the United States and Europe. The Indeed Happiness Index thus delivers key insights into what workplace happiness means to millions of people—while also revealing what keeps us engaged and motivated on the job.”

• In a ranking of 35 countries, Colombia ranks highest for job happiness globally while Japan ranks last.

• Globally, job satisfaction is most strongly correlated with the scores employees leave for work-life balance.

• By contrast, compensation ranks last on the list of measures employees consider when reporting on their  job satisfaction.

• The happiest workers in the US live in Los Angeles, where voluntarism beats out more glamorous roles such as producer and personal assistant on the satisfaction ranking.

In the U.S. Indeed.com found that a high proportion of happy workers are located in California. In fact, five of the the top 10 cities are located in the Golden State, including San Jose, the de facto capital of Silicon Valley. Meanwhile Sacramento, the state’s actual capital, just misses the list at #11.

As for Los Angeles, not only does it come out top, but the best-reviewed jobs reveal a diverse mix that undercuts the stereotype of the city as a place obsessed with superficial glamor. The happiest job is “personal assistant,” while roles such as  “creative director,” “production assistant” and “teaching assistant” also rank highly.

Nationwide, Indeed data underscores that the tradition of public service is strong in the U.S. as jobs that focus on helping others rank highly for happiness across the nation. In the top 10, we see titles such as “teaching assistant,” “substitute teacher,” “instructor” and “childcare provider.”