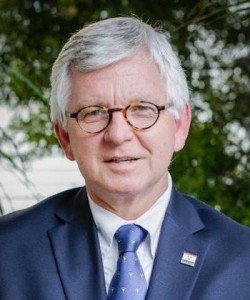 Mark Romig, senior vice president and chief marketing officer for New Orleans & Company, has recently been granted the Order of Civil Merit, in its degree of “Encomienda” (Commander) by His Majesty the King Felipe VI of Spain. This honor rewards “the civic virtues of officials at the service of the State, as well as the extraordinary services of Spanish and foreign citizens in the good of the Nation.”

Romig had the honor of assisting the City of New Orleans in the coordination of the visit of His Majesty the King Felipe VI and Her Majesty the Queen during the city’s Tricentennial in 2018.

“The Consul General of Spain, Mrs. Julia Olmo, has expressed her satisfaction with the award granted by the Spanish Crown to Mr. Mark Romig  in recognition for the services rendered in favor of Spain.”

“I am deeply humbled by this honor from the Spanish Crown,” said Romig. “I also wish to recognize the efforts of the team of professionals I was fortunate to work alongside, especially fellow Order of Civil Merit recipient Ms. Alana Harris, the city’s Deputy Director of Arts and Culture.”

This prestigious honor commemorates Romig’s ongoing commitment to furthering international relations for New Orleans which began with his work more than 35 years ago as the director of protocol and guest relations during the 1984 World’s Fair (Louisiana World Exposition) and most recently with his efforts around the Tricentennial of New Orleans including the participation of Spain. Mark served as president and CEO of the 2018 NOLA Foundation, the support organization for the city’s Tricentennial events.

The Order of Civil Merit (Spanish: Orden del Mérito Civil) was established by King Alfonso XIII of Spain in 1926. The order recognizes the civic virtue of officers in the service of the Nation, as well as extraordinary service by Spanish and foreign citizens for the benefit of Spain.

“There are few people whom I respect and admire more than Mark Romig,” said Stephen Perry, president and CEO of New Orleans & Company, the official destination marketing and sales organization for New Orleans’ cultural economy. “A lifelong New Orleanian, Mark is a person of exceptional integrity and has served our city with distinction for four decades across tourism, academia, business, sports and philanthropy. We salute him for his lifetime dedication as a representative of New Orleans. His contributions to New Orleans’ reputation and international acclaim are a piece of his immense legacy.”

Among his many community volunteer activities, Romig is a member of board of directors of the Audubon Nature Institute, Le Petit Theater and the Emeril Lagasse Foundation, WYES-TV, Fore!Kids Foundation, and the Academy of the Sacred Heart. He serves on the Federal Reserve Bank of Atlanta’s Travel and Tourism Advisory Council and is a past Chairman of the Louisiana Travel Association. Mark also serves as President of the Parking Facilities Corporation (PFC), operators of the Long-term and Economy parking garages at the Louis Armstrong New Orleans International Airport.

In 2013 Romig became the Stadium Announcer for the NFL’s New Orleans Saints in the now Caesars Superdome, succeeding his father, Jerry (who served in the same role for 446 consecutive Saints home games over 44 years).

Romig is a graduate of Brother Martin High School (’74) and the University of New Orleans (UNO) (’78) and was named the 2016 Alumnus of the Year for UNO. He was the recipient of the 2018 Silver Medal from the New Orleans Advertising Club, its highest honor, for outstanding achievements in his career and for his service to the community. In 2017, Romig was awarded the Ordre national du Mérite (National Order of Merit) by the French government. In 2019, he was presented with the Ella Brennan Lifetime Achievement in Hospitality Award by the New Orleans Wine and Food Experience and received the Lifetime Achievement Award from the New Orleans Chapter of the Public Relations Society of America.