BATON ROUGE (AP) — Two New Orleans area lawmakers were chosen Thursday to lead the House committees that will be essential to deciding the fate of Gov. John Bel Edwards' budget and tax proposals.

"This is an outstanding group of dedicated public servants who are ready and able to tackle some of the most pressing issues facing our state," Barras, R-New Iberia, said in a statement.

Republican Rep. Cameron Henry of Metairie was named chairman of the Appropriations Committee, which crafts the state's budget and handles most spending bills.

Democratic Rep. Neil Abramson of New Orleans was chosen chairman of the Ways and Means Committee, which handles tax legislation and state construction spending plans. Abramson was the only Democrat to vote for Barras as speaker, and the chairmanship was seen as a reward for that decision.

The two money committees will be the first stops for Edwards' proposals to rebalance Louisiana's budget and to raise taxes to avoid deep cuts. Although one of the two panels has a Democratic leader, membership of both committees is tilted heavily Republican, which could make it more difficult for Edwards to advance some of his tax plans.

Republicans hold a majority in both the House and Senate, but both chambers have traditions of bipartisanship in their leadership positions. 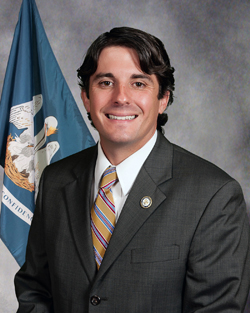