New Orleans 500 Survey: How to Stop Rise in Violent Crime

NEW ORLEANS — Last week, Biz New Orleans asked members of the “New Orleans 500” what needs to be done to stop the recent rise in violent crime — and how the business community can help.

To address the immediate crisis, respondents suggested that city leaders request help from state police, boost cash rewards for anonymous tips, increase neighborhood watch activity, install more crime cameras, initiate a temporary citywide curfew and launch a firearms buyback program. One survey taker even proposed putting a policy in place that holds parents accountable for their underage children’s criminal behavior. But most respondents also said the problem is a longstanding and complex one and, as such, will require sophisticated solutions that address root causes of crime, grow the ranks of the New Orleans Police Department and increase efficiencies throughout the criminal justice system. 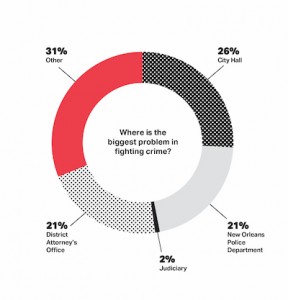 “The city needs to develop a sustainable strategy to reduce violent crime that includes intelligence-based, data-driven policing,” said Cook. “We must grow the New Orleans Police Department through robust recruitment, retention, human resources and training policies. We can accept as many as 50 recruits in an academy class. This would provide 200 potential officers per year and give us a chance to net 120 officers after attrition.”

Many respondents said increasing the ranks of the NOPD by boosting salaries, recruiting efforts and training are top priorities — and they offered different ways to get the job done.

David Sherman of Chehardy Sherman Williams law firm and Lacey Osborne of the St. Tammany Chamber both suggested taking a cue from neighboring Slidell by creating a foundation to fund incentives for police officers. Others suggested raising funds through the Business Council of New Orleans, the New Orleans Police and Justice Foundation, and other existing organizations. Still others suggested finding more funding for NOPD via increased tax revenue.

In this regard, Todd Murphy (former head of the Jefferson Chamber) said New Orleans could learn something from the parish next door.

“The New Orleans Police Department should have a dedicated millage” he said. “Jefferson elects its sheriff and gives the department autonomy and dedicated funding. In contrast, the New Orleans mayor picks the police chief — most recently without a search or search committee — and then controls every aspect of the department including the budget. Which system of government has always worked better?”

“I’m not sure if money is the solution,” said Kristi App, vice president of business development at J.W. Allen & Company. “But I believe the business community would be open to discussions. How would the money be safe guarded? There is so much distrust of City Hall to use money as directed and there is a business community that is tired of paying higher taxes with no return on investment.”

Many respondents expressed frustration with Mayor LaToya Cantrell, District Attorney Jason Williams and city government in general, but just as many said the New Orleans crime problem is everyone’s responsibility. And the first step is identifying the causes.

“We will never address crime until as a society we can tackle the underlying impact of poverty, access to quality education, access to proper nutrition and healthcare,” said Landry. “The crime we are experiencing today is simply a symptom of these underlying issues.”

The Sheraton’s Jim Cook said the community needs to “stop accepting this as normal and demand that all elected officials and especially all criminal justice agencies … commit to collaborative approaches to improving the safety of our city. We need to honor the victims of these horrific offenses by demanding a higher level of safety for all who live in and visit New Orleans.”

Iam Tucker, president and CEO of ILSI Engineering, said that, in the short term, police leaders need to deploy their limited resources in a creative way while waiting for support.

“We need state police help to patrol the interstate in [New Orleans East] until the problem stops, but we need leaders willing to ask for the help,” she said. “If they cannot acknowledge problems, we cannot help to solve them in a meaningful way. They have to stop thinking that band aids on broken bones are actually mending something.”