NEW ORLEANS – Although Arthur Murray’s frequent trips to California mostly revolved around spending time with his family, they inspired the native New Orleanian to move west and open a winery.

“My wife's brother lived in San Francisco, and he would get us to come out to visit. He knew one way to do that was to have us do a wine tour,” said Arthur "Art" Murray, the president of Flambeaux Wine in Sonoma County, California. “He knew that I had a pipe dream of one day doing something in wine.”

While exploring wine country, the Murrays “fell in love” with the charming city of Healdsburg and purchased a piece of property with grape vines. In 2014, the Murray family — grandparents Pattie and Steve, their son Art, his wife Nicole, and granddaughters Alys, Elizabeth, Nia and Lila — launched Flambeaux.

The team is back in New Orleans for the New Orleans Wine & Food Experience, and scheduled to participate in two events on Friday – a noon seminar discerning the differences and similarities between Napa and Sonoma wines, and a 2 p.m. fine wine tasting at the Omni Royal Orleans Hotel Ballroom.

“I honestly think you can't really go wrong with either Sonoma or Napa, but it'll be fun to see if people have a preference – and if they have a preference within the different wineries,” Murray said about the seminar.

Murray and his wife and kids were still living in New Orleans when they launched Flambeaux Wine in Healdsburg, so he’d have to fly back and forth between the two cities. After enjoying a “trial summer” in California, however, the family decided to move there.

The company began producing wine in 2014, but they were not able to sell it until 2017. Murray said that certain wines – Cabernets, for example – must age in barrel for nearly two years. After bottling the wine, Flambeaux gives it six months to a year to fully develop, before releasing the finished product.

“There were three years of a lot of work and not a lot of return,” said Murray.

“It's hard to expand within one vineyard. If you want to expand, you have to contract with new vineyards,” said Murray, noting that Flambeaux’s vineyards occupy six acres of land. “We can make some Zinfandel with that and some Cabernet, but to get bigger and to do new varietals and more cases, you have to source from other vineyards.”

The characteristics of wine from a single vineyard are unique to the site that they’re produced, but when producers mix vineyards to increase their case count, the wines lose a bit of their “identity,” said Murray.

“It's a challenge, but it's been fun because you make a point to go out and meet a lot of grape growers and see what they have to offer,” he said. “And then, hopefully, you can come to an agreement to work with that vineyard long-term.”

To set themselves apart from other California wine companies, the Murrays highlight their New Orleans roots, which were established in the 1700s. Each bottle of Flambeaux wine depicts an image of the flaming torches that illuminate nighttime Carnival parades. Their dog Stella is Flambeaux's unofficial mascot. 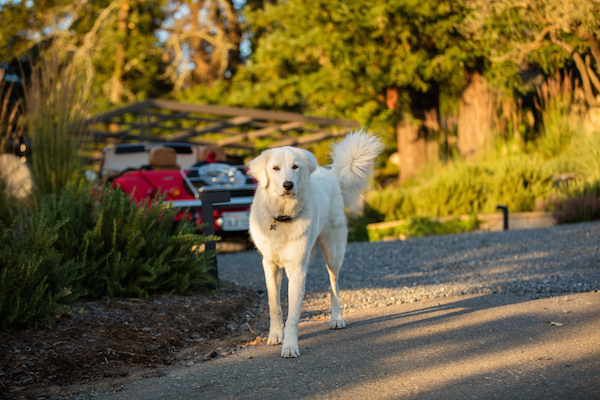 “One of the things about California is that there are a lot of good wines. There are so many labels that it's hard to stand out,” said Murray. “Our label is an homage to New Orleans, and it's a bit of a tribute to three generations, passing the torch, and making wine.”

Flambeaux took off by promoting and selling their wines in Louisiana, instead of trying to build their brand in the cluttered California market. They’ve also sold their wines within Florida, Texas, and Arizona, among other states.

“It's been challenging, but it's also been rewarding, because as it grows we get excited,” said Murray. “We want to make more, but we can't get too big too fast.”

Flambeaux Wine initially produced 400 cases in a year, but they now produce nearly 1250 cases a year.

“If we see a state that's excited, that's how we will expand. But, of course, we have to make the wine to meet that demand,” said Murray. “There's this delicate balance between over-expanding and having too much, and having too little and not being able to meet these new markets. I think we're doing it right.”