New Apps You Should Know

Local entrepreneurs are putting the solutions to common problems right in the palm of your hand.

We’ve all heard the phrase, “There’s an app for that.” But while there are currently over 2.2 million apps available for iOS and 2.6 million for Android, that doesn’t mean there’s an app for everything.

Biz New Orleans caught up with some local entrepreneurs who are using technology to make things like renting an apartment or visiting the doctor a much more painless experience.

If you’ve ever been a landlord or a renter, you may have experienced some problems settling the security deposit. As a landlord, Marco Nelson had issues with some tenants. At the same time, some of his friends were having problems with their landlords.

“I was thinking, ‘How can I solve this problem?’ and documentation seemed like a no-brainer,” he says.

Nelson, an app developer, pitched the idea to some classmates when he was starting his MBA at Tulane University. One of those classmates, Lydia Winkler, was in the process of suing her landlord over a security deposit/property damage dispute. She won her case using time-stamped photo documentation.

The two combined their experience and launched RentCheck — a mobile app that standardizes move-in and move-out property inspections to help landlords and renters determine the deductions on security deposits — in April, 2018.

A landlord or tenant can download the free app and enter information about the property — including the address, and how many bedrooms and bathrooms. The app then provides a guided walk-through to help both parties document the property.

“For example, it will say, ‘Stand in front of the refrigerator and take a photo of the fridge’,” explains Nelson, “and it will ask specific questions about the fridge — are there any scratches, any dents, do the doors open properly, does the light turn on in the fridge?”

Those guided prompts cover the entire house. Nelson says, depending on the size of the property, users can expect to take about 50 photos, noting the condition of features like countertops and toilets. The landlord and renter then agree on the documented condition of the property and run the same procedure during move-out.

Nelson and Winkler worked with property managers and landlords to make the app as comprehensive as possible.

“It’s done in the same manner every time so it’s really easy to compare apples to apples and not a bunch of random photos or a piece of paper that somebody scribbled on at move-in and move-out a year later,” says Nelson.

RentCheck currently boasts about 1,000 users from all 50 states. Nelson says he hopes the app will become a standard in the rental process.

“I don’t see why it shouldn’t be a fair and transparent process for both sides,” he says. 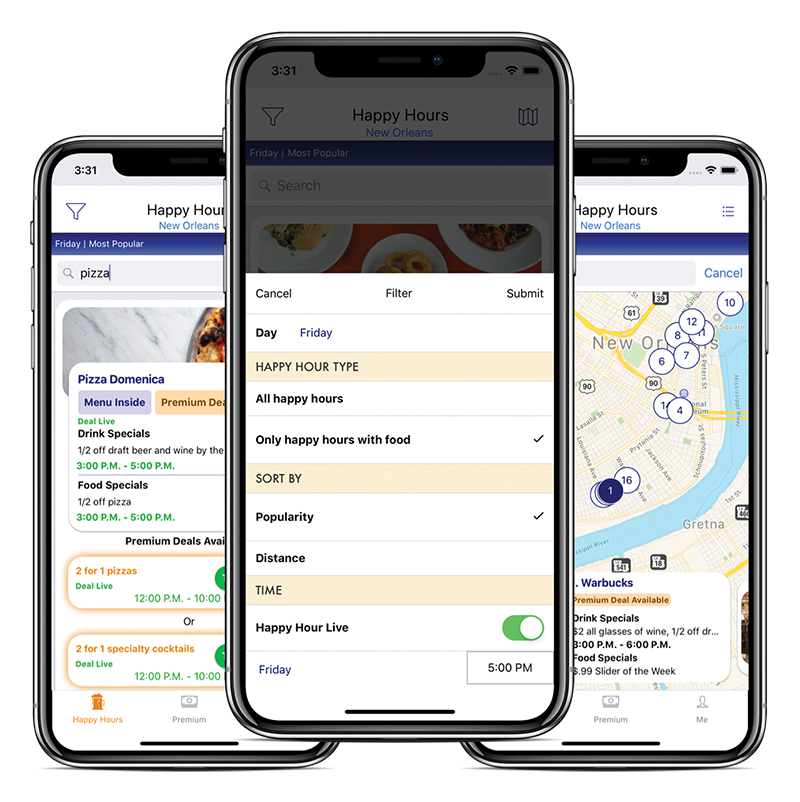 The idea for this app started when Sam Stein and a few of his friends from Tulane (Cary Greenwood and Noah Stambovsky) decided to create a spreadsheet of happy hour deals around town. Convinced they had created something that more people could benefit from, the database soon became an app that was released this past fall.

“You can find every single happy hour in New Orleans and Baton Rouge,” says Stein of the app Drinker’s Edition. “You can look at the most popular happy hours based on crowdsourced data, and you can look at a map view to find what’s closest to you right now.”

The data was, and still is, collected the old-fashioned way: by calling local bars and restaurants and asking for the information.

“We really pride ourselves on doing that because we care about the data we put out, and when people scroll through our app, we want them to feel comfortable that we’re giving them accurate data,” says Stein.

Thanks to the app’s popularity, patrons and restaurateurs now reach out to Drinker’s Edition with an update if a happy hour deal has changed.

One thing the app doesn’t have is public reviews, such as on Yelp. Stein and his co-founders all work in the restaurant industry and know that one, perhaps exaggerated, bad review can damage a business. User feedback is restricted to the ability to “favorite” a happy hour. The more times a happy hour has been favorited, the higher it will rise on the popularity rankings.

For now, Drinker’s Edition is free, and consulted about 10,000 times per month by 3,500 regular users. For $5 a month, users can upgrade to a premium account and receive special deals at participating venues. Stein says the team is in the process of developing a portal for bars and restaurants to update their own information, and they hope to expand to other large cities across the country.

Shelby Sanderford was an undergrad working in the president’s office at a Dallas hospital when she observed systemic frustration from patients, providers and hospital administration.

“There was an inability to reach patient satisfaction scores, and that causes these big health systems to lose millions of dollars every year through their Medicare reimbursement,” she says.

When Sanderford discovered that wait time is one of the biggest factors that contribute to patient satisfaction scores, she developed a way for doctors to better communicate with their patients: an app called DOCPACE.

“We’ve taken the airline model for flight status and applied it to healthcare,” Sanderford says. “We send text notifications prior to a patient’s appointment and notify them of a delay so that they don’t have to wait in the waiting room.”

Taking the airport model a step further, when patients arrive at the doctor’s office, they can check the status of their appointment on a HIPAA-compliant monitor in the waiting room.

The cloud-based system is suited for an iPad and integrates directly into the scheduling platform used by doctors’ office.

“We’ll just pull their schedule for the day and the system keeps track of the flow of patients throughout the day,” Sanderford says. “We’ll time stamp when patients have completed their appointment and that will trigger our algorithms to calculate a delay time.” A doctor’s office can determine whether to send out text notifications to alert patients of long delays — like 15, 30 or 45 minutes.

DOCPACE charges practices a monthly licensing fee and has a few pilot sites running, with the goal of adding two new clients to the system each month.

“This product not only helps save patients’ time,” says Sanderford. “It creates a lot of value for the practice by increasing patient loyalty that ultimately leads to increased referrals, increased ratings and reviews.”

Charles Carriere and his team at Scandy want to take your 2-dimensional photos and video into the future by allowing for high resolution, full-color 3-dimensional scanning on mobile phones that have depth sensors, like the Apple iPhone X.

“Right now, most of the content consumption we do happens on a 2-D screen, so there’s no significant advantage to having 3-D content unless you’re going be in a virtual-reality game,”

Carriere says. “But we believe the ability to create 3D content is going to be more meaningful and more important down the road.”

Carriere says Scandy Pro is something of a niche product; the target audience consists of hobbyists, creators and others who have a need for 3D scanning.

“You can certainly use it to reverse-engineer products in certain situations,” Carriere says.

Scandy Pro is part of a larger business model that includes STL Maker and Cappy AR — all available at different price points and able to capture 3D scans at different levels for various uses.

“We have an app in beta right now that’s able to capture a moving 3D scan or a volumetric video,” says Carriere. “We’re very excited about the ability for that to be used as a content creation tool for folks who are trying to move to the next medium.”