NEW ORLEANS – Nearly ten years ago, CNN honored Liz McCartney as a “Hero of the Year” for her tireless work rebuilding St. Bernard Parish homes, destroyed by Hurricane Katrina. During the aftermath of the storm, she cofounded SBP, a disaster recovery nonprofit formerly known as the St. Bernard Project.

With the help of 180,000 volunteers, the organization has now rebuilt homes for more than 1,600 families around the country. And they don’t show signs of slowing down.

On Wednesday, Jan. 16, McCartney and her SBP team broke ground on St. Peter – a new housing complex featuring 50 units for military veterans and low-to-moderate income families in the Treme area. Thanks to a partnership with Entergy, St. Peter will achieve a “net zero” energy use by implementing HVAC systems, lighting controls and appliances, and 450 solar panels, among other eco-friendly components. 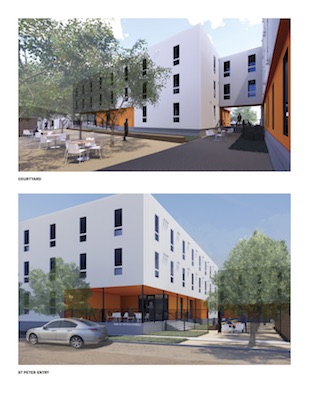 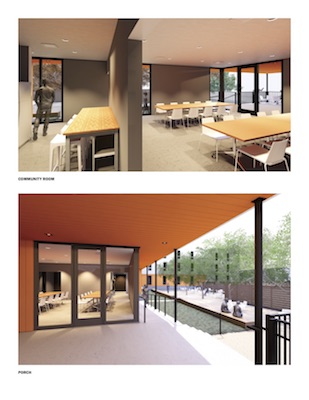 The sleek 45,130-square foot building, which is designed by architect Eskew+Dumez+Ripple, will feature an outdoor gathering space, enhanced by greenery; a wellness center and a common room with a kitchenette; along with private and public spaces reserved for meditation, gardening, and other relaxing activities.

“New Orleans is a place that’s become really expensive for a lot of people,” said McCartney. “Creating affordable, safe, highly energy-efficient units for residents is part of what we believe in at SBP; it’s who we are. Doing it in a neighborhood that is thriving and desirable will continue to make New Orleans feel like a place for everybody.”

The St. Peter project, which is expected to open in early November, will cost approximately 10.3 million dollars. 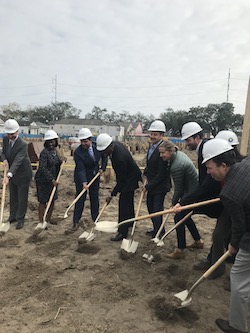 The midweek milestone event featured artist renderings and virtual reality tours of the finished project, along with speeches from Zack Rosenburg, the co-founder and CEO of SBP; Jason Williams a local City Council member; and David Ellis, the president and CEO of Entergy New Orleans; among the project’s other key players.

While standing behind a podium on the construction site, Ellis made an announcement that garnered a round of enthusiastic applause: the Entergy Charitable Foundation committed $1 million to fund the purchase and installation of St. Peter’s solar panels.

Ellis also recalled how Entergy became SBP's first corporate partner, soon after Hurricane Katrina struck land, and how they played a role in SBP's journey from a small nonprofit to a highly-respected national organization, leading the efforts in disaster recovery. 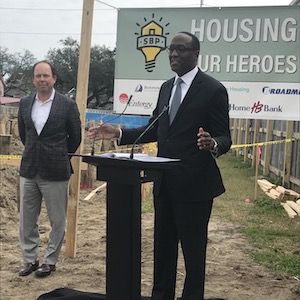 “Affordable housing is one of the biggest challenges working families in our community face. This is particularly true for our veterans, who have proudly served our country,” Ellis (right) said in his speech. “Unfortunately, too many find that the gap between wages and the cost of living is a barrier.”

Approximately 15-percent Entergy Corporation’s workforce is comprised of veterans. In 2018, the company hired 242 veterans, which represents just over 14-percent of all new hires for the year, he said.

"At Entergy, we power life. Keeping the lights on and the energy flowing is one part of our mission,” Ellis continued. “But equally important is giving back to the community in which we live and work, through partnerships and philanthropic efforts."