More than a decade after Hurricane Katrina, three New Orleans neighborhoods have gone from desolate to highly desirable.

It has been 12 years since Hurricane Katrina ravaged many New Orleans neighborhoods, and it has taken nearly that long for many neighborhoods to completely rebound and rebuild. Among the many neighborhoods touched by the storm, St.Claude/St. Roch, Arabi and Algiers are currently in the midst of their own transformations — all years in the making.

Anchored by the area’s first big defining businesses post-Katrina —the New Orleans Healing Center (opened August 28, 2011) and the St. Roch Market (opened April 10, 2015) — along with the highly anticipated opening of a 26,000-square-foot grocery store, Robert Fresh Market, later this year, business is booming in St. Claude/St. Roch. Old houses are being repurposed into new businesses and new life is being breathed into the community known for its burgeoning artistic community and bohemian flair.

“The St. Claude area is becoming a new art community for our city,” says Paul Richard, an agent and broker with Latter and Blum. “It is raw and edgy and cultural, experimenting with mixed media and engraining itself into the fabric of the neighborhood. You see spaces that were once a former metal shop being repurposed and transformed into a totally new space. You can still see what the space originally was but it is functioning as a restaurant or art gallery now.”

On the site of what was formerly an open-air market that was severely damaged by Katrina, The St. Roch Market houses fresh produce and food items from 13 vendors, along with a variety of food and beverages from local chefs.

“The Market is an anchor in this new Marigny area,” says Al Palumbo, Latter and Blum branch manager. “Prior to now, this area was discovered by people who couldn’t afford the Marigny or Bywater. You can look across St. Claude and can get a nice single, residential home in the mid $300,000s to low $200,000s on the average. The developers have found the neighborhood, but there is still an inventory of shotgun houses and creole cottages that were built in the 1900s.

“The millennials and young professionals have discovered this area as well and have started creating art galleries and small restaurants have been popping up because of the affordability of the location,” Palumbo adds. “There is plenty of energy and people around. If you want a hip neighborhood with the flavor of old New Orleans, it’s still there in this neighborhood.”

Faubourg Wines (2805 St. Claude Ave.) is one example of a business that has added to the transformation of the St. Claude neighborhood. Located in a former hydroponic gardening center, this business totally renovated the space and built it to suit their needs.

“We opened in 2012 and have become a stakeholder in the St. Claude corridor,” says Owner Catherine Markel. “We built the business to service the neighborhood which is a diverse demographic of age, race and socioeconomics and we have been well embraced by the community. We are like the neighborhood water cooler, where people gather to discuss the events of the day — only with wine.”

Arabi and old Arabi were an in-demand area even before Katrina due to their close proximity to the French Quarter and the CBD. The area’s recent transformation has come about mostly because of the abundance of commercial buildings being brought back to life.

“It has been unbelievable what has been happening in Arabi,” says Claudette Reuther, an agent for Mauti Meredith Scoggin Properties. “Everything has been rebuilt since Katrina and there has been so much development in the commercial district. Arabi has an arts district that houses artists, galleries and the Valiant Theater. The St. Bernard Parish School recently re-opened the Maumus Center, which was originally built in 1929 and destroyed by Katrina. It has one of the largest dome planetariums for a school. Additionally, the city has recently opened a brewery, marketplace and several restaurants all totally rebuilt and transformed after the hurricane.”

Homes in Arabi neighborhoods rage from $200,000 and up with square foot prices averaging $130 to $160. According to Reuther, properties are going fast and lots are becoming available new construction. Existing construction can still be found in the $130,000 range with new construction being priced between $225,000 to $350,000. 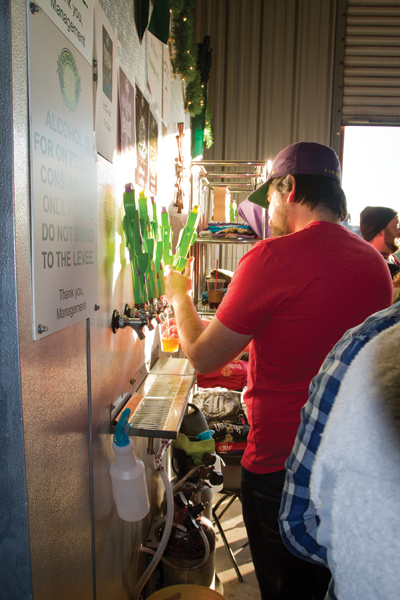 40 Arpent Brewing Company opened in Arabi in 2014, one of many companies drawn to the growing neighborhood.

“I think the attraction of Arabi is its location; It is as close to the city as Lakeview, also it is safe, family friendly and has plenty of affordable housing with plenty of amenities,” Reuther says.

Feeling like gentrification pushed him out of the Bywater, Mitchell Gaudet, owner of Studio Inferno, moved his business to Arabi in 2012. Along with his wife Erica, Gaudet also operates several properties with the Mereaux Foundation called Studio Arabi for local artists.

“The handwriting was on the wall, it was time for us to move and my wife and I decided to make the move to Arabi. It was cheap, like the Bywater was in the day. It was like deja vu’,” Gaudet says. “I grew up in the Ninth Ward and I knew this would be good for us. These are salt of the earth people and it is affordable. It’s just a really cool place to be right now. There is development everywhere. Plus, we are literally 250 feet from the Orleans parish line, so it’s real convenient to get to the city.”

“Some would say that Arabi is the last bastion of potential development,” Richard says. “The rows of track malls that were vacant are now booming businesses.”

Founded in 1719, Algiers is the second oldest neighborhood in New Orleans. This small, tight-knit community is experiencing a dynamic transformation as new development and construction dot the landscape.

“I haven’t seen this kind of development in 25 years and this is the early stages of transformation and the proximity to downtown can’t be beat,” Richard says. “Right now there are at least six to seven new constructions on General de Gaulle alone. It is very exciting to see this type of growth and expansion over here.”

Local developer Joshua Bruno has been a strong driving force in Algiers, investing close to $75 million in the city that he says had property that was underperforming. Seeing the potential for transformation, he invested in the Oakmont Apartments, which went through three phases of drastic renovation, and purchased land along General de Gaulle, which he developed into a retail office center. He currently has plans to develop another 30 acres of property.

“Algiers is hands down poised to be the best city in the metro area in the next five years,” Bruno says. “We are hyper-focused on this area and further development. Before Katrina I would drive through this no man’s land to get to English Turn and see all the land and the opportunity for development and knew what could be done and now I am helping to make it happen. We are building affordable, safe housing that is about an eight-minute driving distance to downtown New Orleans.”

According to Latter and Blum Branch Manager, Evelyn Wolford, the price per square foot in Algiers is gently increasing on resale homes in English Turn and Tall Timbers. This can be attributed to new renovations.

“Historic Algiers Point, while always popular because of its Victorian homes, moves in sync to a degree with Uptown,” Wolford says. “When the Uptown market is very hot, Algiers Point becomes popular with those who cannot afford the higher prices. It tends to slow when Uptown does.”

“Current inventory on the market is down 3.3 percent from the previous year,” Wolford says. “Interestingly, however, prices of current inventory have increased 46.3 percent in that time. This is a reflection of the popularity of Algiers Point. There is little new construction except for a few starts in the Algiers Riverpoint subdivision.”

“In the 70131 zip code — which begins at the mid-point (Holiday Drive of the Algiers area) and extends through English Turn —has seen some significant growth in the past year.

While new construction is sparse, with a few homes under construction in English Turn, closed sales in units in the past year have increased 13.5 percent and in sales volume by 20.8 percent. Available properties on the market are currently down 13.1 percent,” she adds.

In addition to the residential and commercial development, where industrial sheds once lined the Algiers riverfront now lies three miles of newly renovated levee area open for walking, biking and picnics. There is a community-feel that has returned to this quant village that includes corner stores, recording studios, glassblowing workshops, specialty stores, community parks and Victorian cottages.