When Melissa Beese set out to find no-tech, educational toys for her challenged son, she ended up stumbling upon a lucrative niche business market.

Every parent has experienced the following unhappy scenario: After watching endless splashy ads for some cheap plastic creation in between cartoons, a child begins to plead, whine and beg ceaselessly for a much-hyped toy. Finally relenting, the parent then proceeds to spend a small fortune on the toy, only to watch the child discard the “must-have” after five minutes of play in favor of the box it came in.

This is exactly the scenario that Melissa Beese, a mother herself, aimed to avoid when she created her own New Orleans-based toy business, Little Pnuts, in 2012.

Litte Pnuts has found success by providing high-quality engaging toys that truly celebrate the power of learning through play. For a flat fee of $240, families are provided with four “special deliveries” each year of eco-friendly, sustainable and natural and organic toys – all aimed at supporting healthy child development. Each shipment, which includes three to five toys, is curated by Beese to meet the developmental milestones for the age of the child through each three-month phase of development.

“We try to combine the thrill of receiving a parcel with the desire to provide kids with thoughtful, well-made toys and games that encourage little brains to stretch and grow,” Beese says. “All our toys have education behind them. For example, Clever Bear Learns to Count by Haba helps children learn about numbers in a variety of ways. The numbers become visual, and children don’t just memorize the numbers; they visualize them and understand them in a very tactile way.”

Little Pnuts has quickly become a success with both children and parents.

“Melissa is like having a best friend in the toy business, and her service is like having that friend drop care packages off at your home,” says Jillian Warner, who writes the influential blog Mommy Testers.

Currently Little Pnuts operates from a tiny but well-organized home office where Beese has seamlessly blended her background in marketing, graphic design and photography with extensive hours of exhaustive research to build her business.

The Birth of Little Pnuts
After her first son was born prematurely, Beese was told that he would not develop like other children. Among other things, she was instructed not to purchase battery operated toys for her son, as he needed to learn how to do everything on his own to further his cognitive development. Unfortunately, she discovered that the American toy market could not provide her with the kinds of toys she was looking for, so she began her research and eventually found them in Europe.

When her second son was born, subscription boxes filled with baby basics were coming into popularity. The idea to blend her now-extensive knowledge of educational toys with an exciting new business model came together – and Little Pnuts was born.

Making the Leap
In 2011 Beese learned that the biggest toy market in the world was being held in Germany. Gathering her courage, she booked her plane ticket and attended the conference with only her business cards and her idea. When she returned home, she had 32 separate brands interested in workig with her.

Within four months, Beese put together a business plan, marketing plan and website, and Little Pnuts became a reality.
“I would tell anyone who has an idea that they are passionate about to just do it,” she says. “Just do it: Stop thinking about it, and just jump in and do it.”

The Name
Growing up, Beese’s father called her “Peanut,” and it stuck.
“My father only used ‘Melissa’ when he was angry with me,” she says. “My oldest and dearest friends still use that name.”
When her two sons came along, they were her “little p’nuts.” The name was destined to be the name of her business.

Competition
The first thing Beese wants people to know is that she is not in competition with stores such as Toys “R” Us or Target.
“In an age where big-box stores have taken over, Melissa has essentially packed up the care and quality of the neighborhood toy stores we grew up with, put it in a box and sent it around the country,” Warner says.

Though there are many other subscription services for children, such as Little Passport and KiwiCrate, they do not offer the personal attention Beese puts into each one of her boxes.

“I have attended trade shows with her and watched her in action, carefully examining each item she considers for her boxes,” Warner says. “She brings both a parent and a child’s perspective to the table and truly finds high quality educational toys.”

Marketing
There’s no doubt that even though she sells Old World-quality toys, Beese’s business savvy is solidly rooted in the 21st century. Her website is clean, informative and interactive, and she says social media is a significant key to her success. Beese enjoys ongoing one-on-one connection with her customers through her Facebook, Pinterest, Instagram and Twitter accounts.

To connect all of her social media, Beese uses Hootsuite – a program that allows her to schedule all of her posts in the morning to go out throughout the day automatically.  Through her posts she tries to show parents how to keep their kids off the sofa and how to live up to her business slogan of “imagine.create.play.” 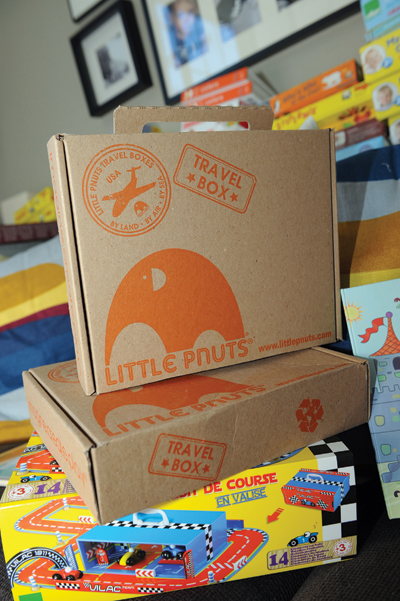 Little Pnuts is about to launch its newest offering – travel boxes. Designed
to look like suitcases, they sell for $30 and include an activity, game and
cards to help keep little ones happily engaged while traveling.

Newest Project
Beese is ready to launch her newest boxes, travel kits for long trips. These themed boxes will also enjoy Beese’s personal hands-on touch and are designed to be gender-neutral and geared to different age groups. The $30 boxes, which are designed to look like suitcases, contain an engaging game, cards, and an activity.

“With these boxes I want parents to have something to give their children other than an iPad,” she says.

Overhead
Beese is a one-woman show and keeps her costs down by locally outsourcing some of her duties such as: printing to Mpress, packaging to Pratt Industries and branding to Bond Public Relations & Brand Strategy. To fulfill and ship deliveries she depends on the services of Ecommerce Solution Group for her subscription boxes and The Light House for the Blind for her travel kits.

Revenue
In her first year, Beese made a goal for herself of reaching 240 subscribers; she now has more than 1,000. She’s seen a 150 percent growth and has exceeded all of her fiscal projections. For now, she will continue to put all of her profits straight back into growing her business.

Recent Recognition
Little Pnuts has been nationally recognized and featured in many influential media sources, including Parenting, Working Mother and Pregnancy & Newborn magazines; Forbes.com; and CBS’ The Talk.

Plans for the Future
Plans are to open a brick-and-mortar store by the beginning of this year’s holiday shopping season. The location currently under consideration is on Harrison Avenue. The space is approximately 2,000 square feet and will serve as a retail store and Beese’s away-from-home office. She plans to employ one or two employees and offer New Orleanians a chance to see her products in person.

Biggest Challenge
Beese admits to being a true workaholic and finds it very hard not to use all of her energy to check off every item on her extensive to-do list.

“My challenge is to shut the office door and turn off my phone,” she says. “My kids are so important to me, and they need to always be my No. 1 priority. I need to practice what I preach and spend more quality time with my children.”