For Priefert Steel executives the decision to offload the company’s massive shipment of steel at the Port of New Orleans and ship it by barge via the Red River to the Port of Caddo-Bossier was a win-win.

“The Priefert steel coils being barged on the Red River from New Orleans to Caddo-Bossier highlights the integral partnership between the inland-waterway system and our deep-water ports in the maritime industry,” said Ken Guidry, Executive Director of the Red River Waterway Commission, which works with ports, carriers and shippers to promote governmental projects that keep the Red River navigable.

Steel is one of the primary commodities transported via the vast Mississippi River inland river system. Priefert Steel, like many other shippers, recognizes the value of the connectivity of the Port of New Orleans and its surrounding inland river ports. The Port of Caddo-Bossier and the Port of New Orleans share a partnership that has facilitated commerce along the Red River Waterway that began in 1995 when the Port of Caddo-Parish welcomed its first load of cargo.

“As a new port within the State of Louisiana, our early interactions (with the Port of New Orleans) were through the Ports Association of Louisiana (PAL), and these interactions led to a foundation of trust being established, and most importantly friendships,” said Eric England, Executive Director of the Port of Caddo-Bossier.

Robert Landry, Chief Commercial Officer at the Port of New Orleans, agrees with England. “We’ve always been linked by the inland waterway system and long before modern-day activities there was barge traffic between the two areas,” said Landry. “I think what we have seen over the years is that we have grown a lot closer in understanding the dynamics and the possibilities of working together and what we are seeing now is a culmination of those efforts.”

Like the Port of New Orleans, the Port of Caddo-Bossier operates as a landlord port with access to barge, rail and truck transloading. Within the port’s 2,000-acre industrial complex are over 20-miles of railway and 17 tenants. A staff of 20 oversees port tenants, customers and all maritime activity and operations.

“The Port of Caddo-Bossier owns a total of 2,300 acres with approximately 300 acres separate from the main port complex. Of this total, we have approximately 700 vacant acres remaining for future development,” said England. “To us, acreage translates to jobs, and our port, like many others in the state, is a catalyst for job creation and dollar investment.”

On May 26 the Warnow Sun arrived at the Port of New Orleans Alabo Street Wharf where it discharged 1,150 metric tons of steel for Priefert. The steel, loaded onto barge, was then shipped via the inland waterway system to Caddo-Bossier. Despite delays due to record high waters on the Red River the cargo reached Priefert and was successfully trucked to Mount Pleasant, Texas.

“Not only do we save cost moving the steel to Shreveport then to Mount Pleasant versus Houston to Mount Pleasant, we experience no delays in loading and picking up coils at the Port of Caddo-Bossier,” said Chris Shipp, General Manager and Director of Purchasing at Priefert Steel. “The relationship we have established with the Port of Caddo-Bossier personnel has created a partnership that has far exceeded our expectations.”

Because the Port of Caddo-Bossier works directly with customers without contracting a third-party stevedore, it is able to provide direct connections to their customers. This aspect of how the port nurtures its customer base was vital in the rewarding outcome of the move this past May. They provided a direct introduction to the Port of New Orleans team responsible that allowed all three parties to come to the table to plan a strategic move of the steel.

“We were proud to make introductions to all the logistics players involved including the Port NOLA team,” said England.

Priefert has plans to increase its barging of steel via the inland river from every other month to a once-monthly service. The ease of connectivity the Red River provides and the superior service offered by both ports continue to attract shippers. The Port of New Orleans has regular vessel calls from Rickmers and Chipolbrok, and the Port of Caddo-Bossier recently welcomed Bentler Steel, who invested nearly $1 billion in a state of the art steel tube mill that employs more than 600 people.

Currently the two ports are working toward building their Dallas-based customers.

“Early on, it was believed our Port would be a gateway to Dallas for Port NOLA,” explains England.” We worked together on various marketing campaigns.  We even held Port Night in the Dallas-Fort Worth area to promote our two ports.”

“Shreveport is not only a major hub for North Louisiana,” said LaGrange. “We see it as a hub for northeast Texas with stronger relationships bringing in cargo from the Dallas-Fort Worth and Arkansas areas.”

The inland river connections are vital to Louisiana’s trade.  The relationship between not only the Port of New Orleans and the Port of Caddo-Bossier, but all the encompassing ports along the Red River are necessary in the continued growth of the state’s economy.

“People everywhere are dependent upon each other for the products they use every day, and this worldwide interchange of goods is handled through the seaports, yet few realize that ports, in fulfilling this role, provide not only facilities for waterborne transport, but jobs for people and increased prosperity for all,” said Capt. Thomas F. “Tom” Murphy, President of the Caddo-Bossier Parishes Port Commission. 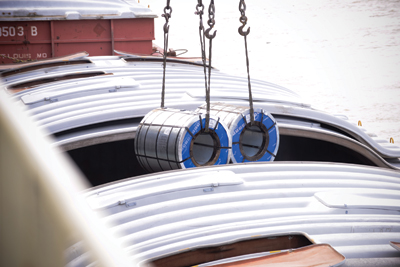 The Warnow Sun’s steel cargo is transloaded to barge at the Port of New Orleans.