NEW ORLEANS – Nationwide Economics’ latest Health of Housing Markets report found that a number of metropolitan statistical areas (MSAs) with strong ties to the energy sector are weakening as a result of the impact of lower oil prices on employment. The bottom 10 markets in the Health of Housing Markets report released this week are mostly concentrated in Texas and Louisiana.

The New Orleans/ Metairie area ranks 1st in the Bottom 10 of housing markets in terms of overall health –meaning it’s the least healthy of 400 MSAs considered in the report.

The bottom 10 MSAs include:

The 10 largest declines in the past year are seen in: 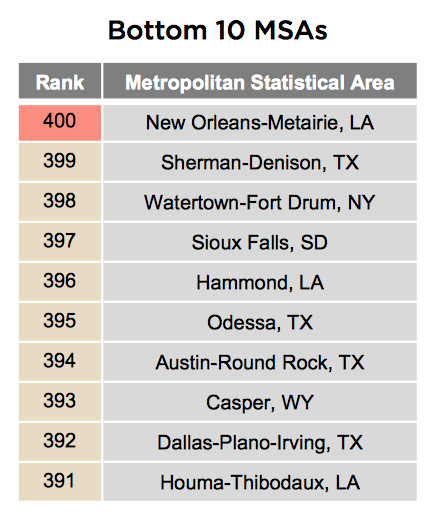 Although down modestly from its peak, the national Leading Index of Healthy Housing Markets (LIHHM) remains at a level well over the break-even of 100 — suggesting that the U.S. housing market is healthy with little chance of a housing downturn in the next year. Rapid house price appreciation is reducing affordability, however, and is a risk to housing sustainability.

Regionally, the LIHHM performance rankings show that the housing markets in the vast majority of metropolitan statistical areas (MSAs) and divisions are healthy. This suggests that most local housing markets should see sustainable expansion in the near term.

The current value for the national LIHHM is 108.2, slightly below readings from earlier this year. An index value over 100 suggests that the national housing market is healthy, with lower chances of a housing downturn over the next year as the index moves increasingly above the 100 break-even value. National house price appreciation is accelerating and is weakening relative affordability, contributing to the modest downward trend in the national LIHHM this year. Regionally, the LIHHM performance rankings show that the vast majority of metro areas across the country are healthy, indicating that few regional housing markets are vulnerable to a housing downturn – but we have increasing concerns about local markets that have a heavy reliance on the energy sector, as low oil prices are reducing employment.