Tackling the growing issue of sports concussions, Doctors Imaging in Metairie boasts the only program of its kind in the Gulf South.

To say that football has surpassed baseball as America’s new national pastime would be an understatement.

The trickle-down effect is easy to see: from August until February, football dominates the American cultural landscape. From high school prep talent playing under the Friday night lights, to collegiate stars gracing the gridiron each Saturday, football saturates the public consciousness. It seems America’s thirst for the game is insatiable.

Yet the long-term health effects currently associated with America’s most common sport have many athletes, and parents, concerned.

Dr. Frank Conidi, director of the Florida Center for Headache and Sports Neurology, presented study results earlier this spring to the American Academy of Neurology, which revealed more than 40 percent of retired NFL players had signs of traumatic brain injury (TBI).

While most cases of TBI are the result of relatively mild concussions, the threat of post-concussion effects is a fearsome reality not to be taken lightly.

The Mayo Clinic defines post-concussion syndrome as “a complex disorder in which various symptoms—such as headaches and dizziness—last for weeks and sometimes months after the injury that caused the concussion.”

Research and objective data are the only true measures doctors have in the fight to bring awareness to the public about the realities of concussions in the United States.

And the numbers may surprise you.

According to the Centers for Disease Control and Prevention, in 2010, about 2.5 million U.S. emergency department visits, hospitalizations or deaths were associated with TBI. Either alone or in combination with other injuries, TBI contributed to the deaths of more than 50,000 people that year.

Research from the Sports Concussion Institute shows “football is the most common sport with concussion risk for males,” with a 75 percent chance of suffering a concussion.

A professional football player will receive an estimated 900 to 1,500 blows to the head during a season, according to the SCI.

While the NFL grabs most of the national headlines—and served as the bad guy in this past winter’s Will Smith drama, “Concussion,”— the risk of brain injury does not magically materialize when players reach the professional ranks.

Throughout the country, thousands of young men strap on their helmets each week to play the game, risking injury in the pursuit of gridiron glory.

In 2009 the CDC estimated “248,418 children (age 19 or younger) were treated in U.S. emergency departments for sports and recreation-related injuries that included a diagnosis of concussion or TBI.

As concern about the effects of post-concussion syndrome increases across the nation—especially with how it relates to our athletes—one New Orleans medical clinic has created a program to help educate the public with objective, statistically backed data about mild traumatic brain injuries.

Dr. Edward Soll, along with a team of MRI and other scientific experts, has developed a quantitative diffusion tensor imaging program (qDTI) at Doctors Imaging in Metairie.

Currently the only program of its kind in the Gulf South region, Doctors Imaging’s qDTI procedure allows their team to see microscopic brain injuries previously undetectable.

“Most people that get an MRI, the doctor says, ‘Maybe you’re a little forgetful—I’ll send you over for an MRI,’ and all they do is a regular MRI,” Dr. Soll explains. “It’s not going to show anything. It’s not going to tell anything about the integrity of the white matter.” 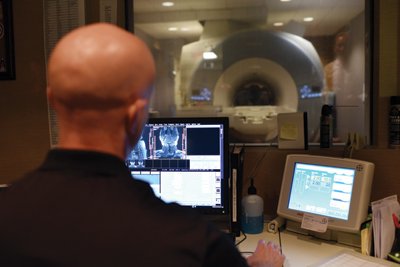 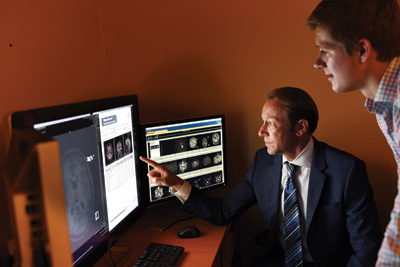 LEFT- In 2010, about 2.5 million emergency room visits, hospitalizations or deaths were associated with traumatic brain injuries. RIGHT- Dr. Shea Soll looks at images with Christopher Lane, a senior at Isidore Newman School who came to Doctors Imaging two years ago for evaluation.

Diffusion tensor imaging is a method used to watch how water moves along the nerves, or what is called FA or fractional anisotropy. If a disruption in the water pathway is detected, Dr. Soll and his staff know that there is an injury or damage in that specific area of the brain.

With the help of MRI physicists and analytical and statistical PhDs from Harvard, UCLA and Johns Hopkins medical schools, Dr. Soll has devoted the past three years of his life to developing the qDTI program at Doctors Imaging.

“My whole career as a radiologist changed from doing everything for urologists, pediatricians etc., to really focusing on just this one problem, which is the brain,” Dr. Soll says. “Whether it’s abnormal because of an accident or Alzheimer’s or multiple sclerosis, we’re able to do all this study of the white matter, which is basically the electrical circuits of the brain.”

Using the 3.0T Siemens MRI system at Doctors Imaging and FMRIB Software Library (FSL) from the University of Oxford in England to process the data, Dr. Soll examines all 48 regions of the brain, taking DTI pictures from 65 different angles of each area. From there, he evaluates white matter injury by determining if a patient’s individual fractional anisotropy (FA) deviates from a normal control group established at Doctors Imaging.

In two years of the program, Doctors Imaging has treated approximately 120 patients, with “very good results.”

Although the clinic does not currently have any official partnerships with athletics associations, Doctors Imaging has treated some NFL alumni from the NFL Players Association trust, which evaluates players within 15 years of when they quit playing.

Doctors Imaging estimates that about 35 percent of the patients they work with are under the age of 18.

Among those recently was Christopher Lane, a typical All-American high schooler who has loved the game of football since he was a toddler.

But two years ago, his eyes were opened to the dangerous, often muddled world of post-concussion syndrome.

As a sophomore in October 2014, Lane suffered a devastating concussion playing in a Saturday junior varsity game for Newman. He can still vividly recall the experience.

“I get hit, and you always get back up as fast as you can,” Lane says. “That’s the weird part, you don’t really feel it.”

Later that night while hanging out with some friends, Lane began to feel “terrible” and decided to return home.

“The scary part about it all was when I was driving home, I had to pull over and throw up,” Lane says.

Dizziness, nausea and pounding headaches were some of the symptoms Lane would endure over the next few days.

The doctor ordered him to sit in a dark room for two weeks, without television, computers, phones, tablets or even books.

His injury meant Lane had to watch his teammates from the sidelines for the next three games while he recovered, but the on-field consequences were only the beginning.

Lane was unable to complete his academic assignments for three weeks. He fell behind in school, and his grades suffered.

Normally an outgoing person, Lane found himself battling depression, and skipping hanging out with his friends.

“I didn’t have any pep in my step,” Lane explains. “You don’t feel yourself. It’s a weird feeling, and it’s scary, honestly.”

Lane returned to the gridiron four weeks after his concussion for Newman’s last game of the season, but the normally self-assured wide receiver had lost confidence in his on-field abilities, a confidence he did not fully regain until his junior season last fall.

“I feel like when you get a concussion, it’s a lot longer than two weeks to actually get back,” Lane says. “It’s really like a month or two to really know that you’re feeling well.”

A family friend referred Lane’s mother, Mary Lucy, to Doctors Imaging soon after the concussion, and she immediately made an appointment for her son.

What Mary Lucy and Christopher found at Doctors Imaging was peace of mind by viewing objective data revealed from the qDTI program.

“I studied [Christopher], and he had two areas of high FA, which meant that he had some impact,” Dr. Soll explains. “Those areas of high FA usually recover very quickly. I basically told his mom that he didn’t have any major areas of concern, and that if he wanted to play again, he could play again.” 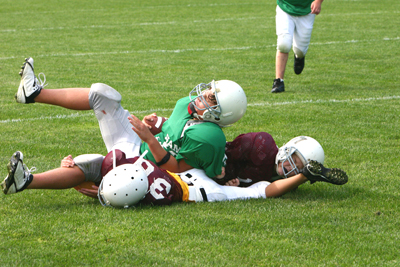 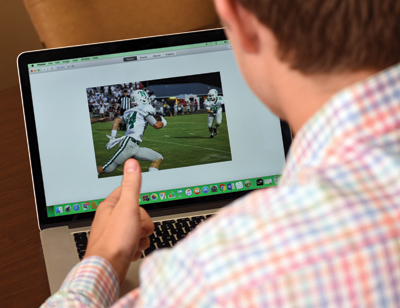 LEFT- According to the Sports Concussion Institute, football players have a 75 percent chance of suffering a concussion. RIGHT- Newman senior Christopher Lane watches footage on a laptop at Doctors Imaging. An estimated 35 percent of the patients the clinic sees annually are under the age of 18.

The results were music to the mother’s ears.

“[Dr. Edward Soll] made me feel so much better,” she says. “I felt like he really cared about Christopher and making sure he was OK. Now I know he’s got a healthy brain.”

This fall the athlete will take the field for his senior season on the Newman football team because he says the game is his passion, and his first sporting love.

While the Doctors Imaging qDTI program serves patients who have suffered brain trauma from severe automobile accidents, sports injuries, electrocution and crush injuries, a portion of the clinic’s original financial model to begin the cutting-edge program was based on appealing to the New Orleans legal community.

The technology has aided lawyers in objectively demonstrating their clients’ serious injuries within the confines of a courtroom or deposition.

But after hearing about the work of neuroscientists in Europe, last summer Dr. Soll and his staff discovered a new use for their technology —aiding in the detection of early onset Alzheimer’s disease.

“By using the very same techniques that I was using for trauma to the brain, [European scientists] found that there was white matter damage similar to FA abnormalities in certain areas of the brain that preceded the severe symptoms of Alzheimer’s,” Dr. Soll explains.

Though Alzheimer’s is still without a cure, the early detection allows patients to properly prepare and adapt to their future lifestyle needs.

“By finding out about it early, It helps them manage the disease and look at options for what they and their family and going to have to do in the future,” he says.

The brain is a complex human organ, and Dr. Soll admits his team has only scratched the surface of the potential research.

Already a trailblazer for the qDTI procedure in the Gulf South region, Shea Soll, chief executive officer of Doctors Imaging, hopes the clinic will become the “gold standard” for post-concussion protocol and imaging.

“We want to continue to pioneer ways to help patients and their treating physicians so that they can provide the care that will really benefit those patients,” Shea says. “The more institutions in the region that can develop these programs and offer these procedures, the more legitimacy is provided to the procedures themselves, and it becomes more mainstream.”

Facts About Concussions in Youth Athletics

• 33 percent of all sports concussions happen at practice

• 33 percent of high school athletes who have a sports concussion report two or more in the same year.