The whole project got started when De La Puente found a piece of commercial property that piqued his interest – it just so happened to be a tiny (180 square-foot), boarded-up building that was covered in graffiti. 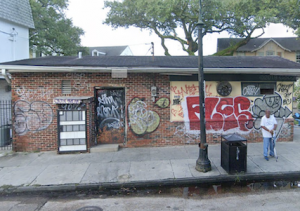 The building that now houses The Flagpole was a diamond in the rough when Andres De La Puente and Yvette Tablada first saw it.

“My husband told me he found this cute little property and he wanted me to come take a look at it,” said Tablada, who handles marketing for the new venture when she’s not working at her full-time engineering job or taking care of the couple’s two young children. She works the counter at the Flagpole on weekends. (“It’s been a crazy few years because I had babies back to back and this all happened while I was pregnant or with a newborn,” she said.)

Tablada said records show the water at the building was last turned off in 1992, so it’s probable the building has been vacant for that long. But she’s hearing from people in the neighborhood that it used to be a bustling spot.

“I know the space was a sandwich shop back in the day and I hear a lot of stories about how the kids would get their snacks and sandwiches there,” she said. “We were also told that before the sandwich shop it was a bookie place but I am not sure how far back that was.”

The couple tracked down the owner in California and made a deal to purchase the building along with the larger one next door. They spent 2019 renovating both spots. The 2,200 square-foot commercial structure next door is now a five-bedroom apartment. The little building, meanwhile, got a complete makeover and is now a cheery spot with glass windows on three sides named in honor of the nearby Fair Grounds (as in “meet me at the flagpole”).

“We did a very soft opening because to open in times like this is interesting in and of itself,” said Tablada. “Our first day was Memorial Day, so we’re now three weeks in. We’re learning like the rest of the city how to safely manage and balance life without childcare with entrepreneurship.

“So far the neighborhood is really happy,” said Tablada. “We’re there to obviously run a business but also to support the community and beautify the neighborhood. That area there hasn’t had many places to serve a cup of coffee. Now there’s another establishment [Old Road Coffee on Bayou Road] but for the longest time they really hadn’t had anything so we’re excited.”

De La Puente immigrated from Cuba in 2008. Tablada was raised in New Orleans but both her parents came from Cuba as well. So, inspired by their heritage, they serve a traditional Cuban coffee drink called cortadito, which is sweet and rich thanks to evaporated milk, along with specialty natural snoballs: strawberry, pineapple, mango, guava and cafe con leche (coffee). The Flagpole also offers a special snoball flavored with Malta, a nonalcoholic malt beverage brewed from barley and hops. Tablada describes it as “a Spanish version of root beer but different.” Customers can also order a guava pastelito, which is a puff pastry filled with guava paste.

There are plans to add more sweet and savory pastelitos along with Cuban sandwiches – but the menu will never be expansive.

“Our menu can’t be too big because we happened to fall in love with a tiny place,” said Tablada.