This is the second in a series of stories about the city’s growing food and beverage industry.

NEW ORLEANS — The food and beverage industry is complex and competitive, but it can produce its share of “overnight” successes. In 2017, for instance, RXBar CEO Peter Rahal sold his five-year-old protein bar company to Kellogg for $600 million. He and a partner started the business in their basement with a $10,000 initial investment. 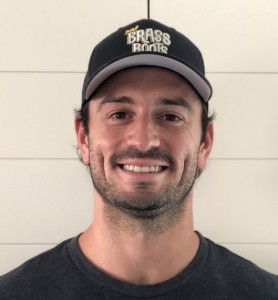 Closer to home, New Orleans-based beverage company Big Easy Bucha recently announced its acquisition for an undisclosed sum by Beliv, a Latin American bev-tech company with 28 brands in 30 countries. The size of the deal is undoubtedly smaller than the RXBar sale, but the transaction nonetheless signifies good things for the New Orleans consumer packaged goods industry, which has been having a moment.

So who will be the next local entrepreneur to turn a big idea into a big business success? One candidate is Aaron Gailmor, who launched a healthy snacks company called Brass Roots here in 2019.

The idea for the healthy food venture began a few years earlier when Gailmor, a Vermont native, encountered sacha inchi seeds for the first time in the bulk foods aisle of a California grocery store.

Sacha inchi is a plant originally found in South America and the Caribbean that produces fruit with large, edible seeds. Whether roasted, ground into powder or pressed to extract oil, the seeds are rich in protein, fiber and heart-healthy fats. They are also free of many of the allergens associated with peanuts and tree nuts.

Intrigued by the possibilities of the ingredient, Gailmor brought some seeds home to New Orleans and began experimenting in the kitchen of his downtown apartment. His first goal was to see if he could blend them into a nut butter.

“I remember putting them in a food processor and for the first minute nothing really happened,” he said. “And then over the next two to three minutes the seeds eventually turned into this beautiful, golden brown, amazingly tasty sacha inchi butter that smelled very similar to peanut butter. And I was fascinated, thinking, ‘What can’t I do with this?’ You can make snack bars with it, you could make just about anything, right? And that’s when I realized there might be a platform to make a snack brand all around the sacha inchi seed.”

Gailmor’s fascination with the ingredient eventually took him to Thailand, where most sacha inchi seeds are now grown commercially. He forged a relationship with a supplier there who uses the proceeds to run a rural K-12 school.

“We connected because when I started thinking of what I wanted our brand to be,” he said. “I wanted to do a lot of work with kids, because it’s something that my both my parents have done. I wanted to give back to the community here and provide some of our nutrition knowledge to kids. Every time we buy sacha inchi seeds from him, the money is going directly into his budget for school.”

After the initial kitchen experiments, Gailmor began sharing his sacha inchi butter with friends and he continued to make adjustments to the recipe. In 2019, the nascent business took a big step forward when Gailmor used social media to conduct market research.

“I eventually decided the only way to figure out if this is going to be a product was to test it on potential customers and see if they wanted to buy it,” he said. “So we ran some Facebook ads where we targeted people with peanut allergies. We offered up a free packet and gave them a promo code. Basically, we tracked conversions to purchases after that and the conversion rate was really high. It was like one out of three people bought the product. And so I was like, ‘Okay, we’ve got something here.’”

At the end of 2019, Gailmor officially launched the company, which now makes three butters, three varieties of roasted seeds and three “puffs,” essentially healthy versions of Cheetos that have become the company’s best sellers. The butters and seeds are made in a New Orleans facility; the puffs are made by a contract manufacturer using special equipment near Columbus, Ohio.

The company’s first round of investment came from a small venture capital firm in Chicago. A second round came in January 2021 from John B. Sanfilippo & Son Inc., a publicly traded processor, packager, marketer and distributor of nut- and dried fruit-based products that’s known for Fisher and other brands.

Because it launched right before the start of the pandemic, Brass Roots had to focus on e-commerce for its first year and a half, but Gailmor said the sales figures have been impressive. He said the company has been essentially doubling its revenue every quarter.

“The pandemic made it hard because we couldn’t launch in any retailers in 2020,” he said. “They were all saying ‘No new products for a year.’ They were just making sure their shelves were stocked, so instead we really got our e-commerce game down. And then this year is when we launched in retail.”

And there are plenty more snacks on the way. Just before Thanksgiving, a truck loaded with 20,000 pounds of seeds was delivered from the Port of New Orleans to the Brass Roots headquarters on Celeste Street in the Lower Garden District. Ultimately, Gailmor believes the size of the business will only be limited by the amount of raw material he can get.

“Supply is going to be a huge thing,” he said. “We have to increase demand, and then supply has to come with it. You have to create a stable but also growing base of consumers who believe in sacha inchi. … But the potential to grow is absolutely there. ”