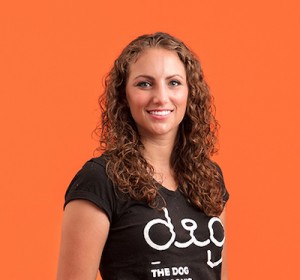 NEW ORLEANS – Tinder leads the online dating industry in number of downloads and total revenue – followed by other big names like Match, OkCupid and eHarmony – but platforms that serve niche audiences are also an important part of the $2 billion business. There’s Soul Geek for sci-fi and fantasy nerds, Hater for cynics and My 420 Mate for people who love cannabis as much as romance.

Enter sisters Leigh D’Angelo and Casey Isaacson, who co-founded Dig – The Dog Person’s Dating App, in 2017 in New Orleans. After three years of growth, Dig has reached 150,000 users and D’Angelo has been included in the Power Book 2020 published by Global Dating Insights, a trade publication for the industry. D’Angelo is schedule to speak at a GDI event next month in New York City.

The idea behind Dig is simple: dog people will connect best with other dog people … and there’s nothing more frustrating than a promising relationship being derailed by pet-related incompatibility.

To sell the idea and recruit new users, D’Angelo – a former WVUE reporter and Tulane professor – has been criss-crossing the country for more than a year to host events for people and their pets. Many of them have been at WeWork locations.

“They let us host our events there to get two-legged and four-legged foot traffic in the door,” said D’Angelo. “The content is so great for them: people and puppies and falling in love. You never know what puppies are going to be available for adoption but sometimes we get a whole litter. Last week, meanwhile, we threw a 400-person speed dating with your dog event in Los Angeles.”

Last fall, Dig won $50,000 to spend on digital marketing in a competition sponsored by Purina. The company worked with Chicago-based digital marketing company Centro to create a social media campaign featuring real “dogs and their single humans” (all users of the Dig service) to run on Facebook, Instagram and Google.

The campaign launched just in time for “dating season.”

Currently, Dig is free for users although companies can pay to be featured. The Dig-sponsored events also turn a profit.

“We’re making just enough to cover all operations costs,” said D’Angelo, who has one part-time employee in Austin plus a New Orleans-based team of freelancers and about 40 “brand ambassadors” around the country. “Now that we’ve got this great community on the app we can start offering in-app purchases and subscription tiers like a lot of the dating apps that have a freemium model with the option to pay [for upgrades].”

D’Angelo said Dig is ahead of the competition. There’s one other dog-focused app for the Seattle area exclusively and, of course, big dating services have the option to filter potential dates by their level of dog friendliness. Dig, however, is the only nationwide niche dating app dedicated to dog lovers.

The plan is to be just one of the services that singles use.

“All dating apps work together more than you would think,” said D’Angelo. “Most users are on three or four different services at a time for nine or 10 hours per week on average. People don’t believe it but then you see how you spend your time – and people are spending a half hour to an hour each day talking to people.”