What you need to know about the new airport terminal

The time has finally come. After nearly four years of construction, the new $1 billion terminal at Louis Armstrong New Orleans International Airport (MSY) is opening Wednesday, Nov. 6. All commercial flights will use the new terminal at 1 Terminal Drive, and the current facility at 900 Airline Dr. will be closed to the public.

This is a monumental change for travel to and from New Orleans, and with change comes uncertainty. One of the best aspects of the current airport is its predictability. The new terminal has a lot of unknowns. To clear some of them up, I went to an open house of the new facility and did a little exploring.

If you are going to MSY in the next six months, give yourself an extra hour to get there and plan to arrive two hours before your flight. That sounds like too much time, but it is a lot easier to enjoy a new restaurant waiting for your flight than it is to rebook a flight you missed.

You will not be able to drive into the airport directly from Airline Drive or from the I-10 Airport Access Road. The new terminal must be entered via Terminal Drive, a new dedicated roadway system that begins at Veterans Boulevard and Loyola Drive.

From East of the airport: Take I-10 West and exit at Loyola Drive. Turn left onto Loyola Drive and continue straight across Veterans Boulevard onto Terminal Drive.

From West of the airport: Take I-10 East and exit at Loyola Drive. Turn right onto Loyola Drive and continue straight across Veterans Boulevard onto Terminal Drive. 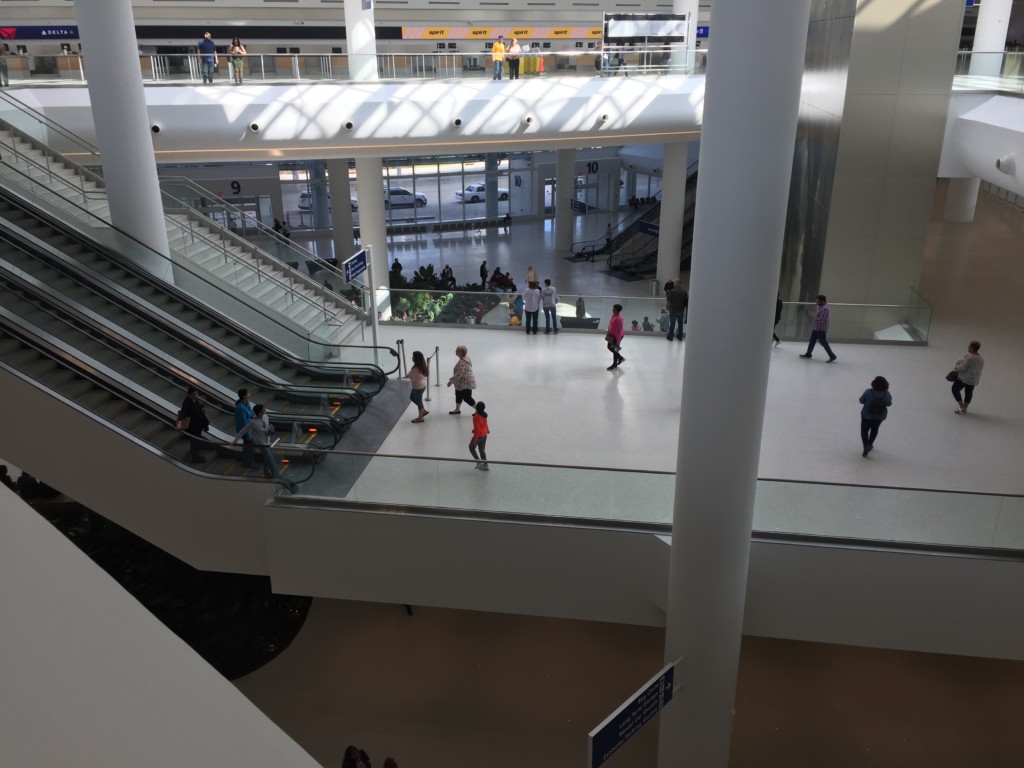 Be patient. Don’t get upset if you miss a turn. The signage leaves a bit to be desired, and I missed the turn into the Short Term Parking Garage. As a result, I had to drive around the entire airport and back to the traffic circle to try again. If this happens when the airport is really busy, it could add a lot of time. Be kind to yourself and other drivers. This map shows the roadways around the terminal.

The new garages have a system called Park Assist that uses technology to help drivers find parking spaces quickly. There are cameras that monitor the spaces and tell you through electronic signage the number of spots available on the different levels. Circular lights installed on the ceiling of the rows indicate where there are open spaces—red is full and green is empty.

Short-term parking rates: First half hour is free. Each additional half hour is $2, and the 24 hour-maximum is $22.

Surface parking rates: First half hour is free. Each additional half hour is $2, and the 24 hour-maximum is $18. 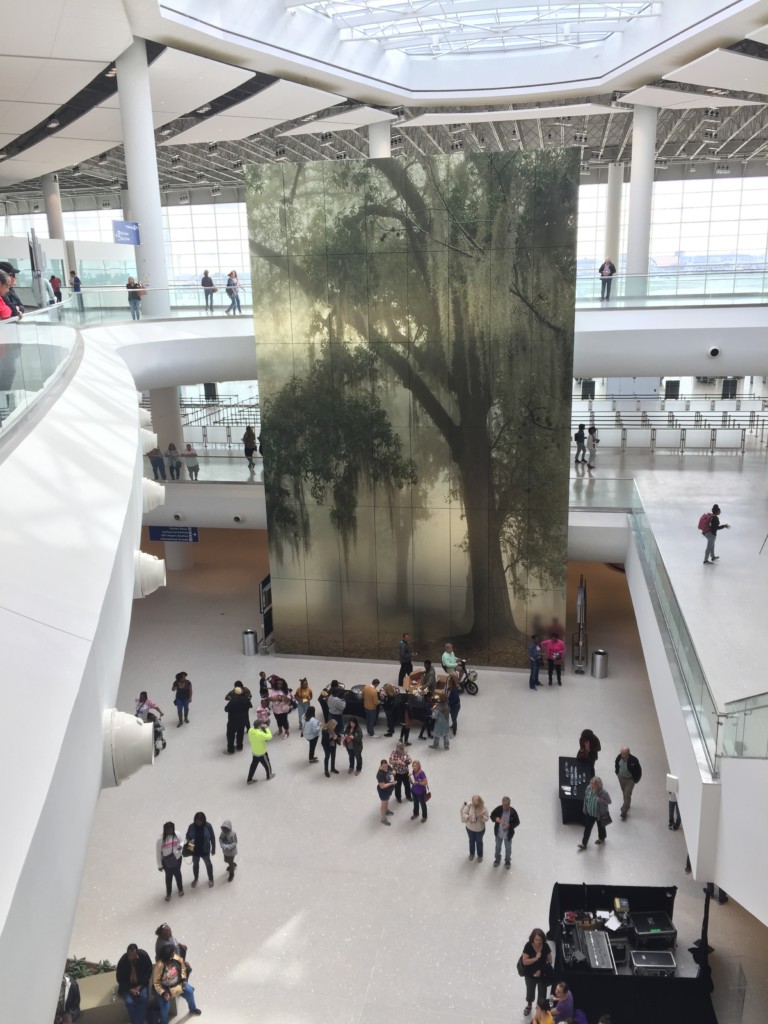 It is stunning. The natural light from the floor-to-ceiling windows and the architectural lines create a beautiful space. The three-level layout is organized and, unlike Terminal Drive outside, the interior of the airport is easy to traverse. The top, or third level, is the ticketing area. There are airline-specific ticket kiosks in front of the curving line of ticketing desks where agents will be working to help passengers. There is one coffee shop, Peet’s.

There are two elevator banks and escalators for moving between the levels. If you are able, I suggest using the escalators. Take a moment to look up and out at the open design of the terminal. The lines from the ceiling, the columns and the wall of windows shift as you move up and down in the space.

The second level contains the consolidated security checkpoint, the concourses and the retail and food vendors. The bottom, or first level, is baggage claim with six baggage conveyors, the Jazz Garden performance stage and indoor garden, ground transportation and Parish Provisions, a shop with snacks, beer, wine and liquor.

All passengers will access their gates through one security checkpoint on Level 2. The centralized checkpoint is the width of a football field and has 15 lanes (hopefully most of them will be open most of the time, and all of them will be open during peak travel days). The screening equipment was still being assembled when I toured the airport, but it was easy to imagine the area filled with people annoyed with each other. Fingers crossed TSA agents will operate the checkpoint efficiently. 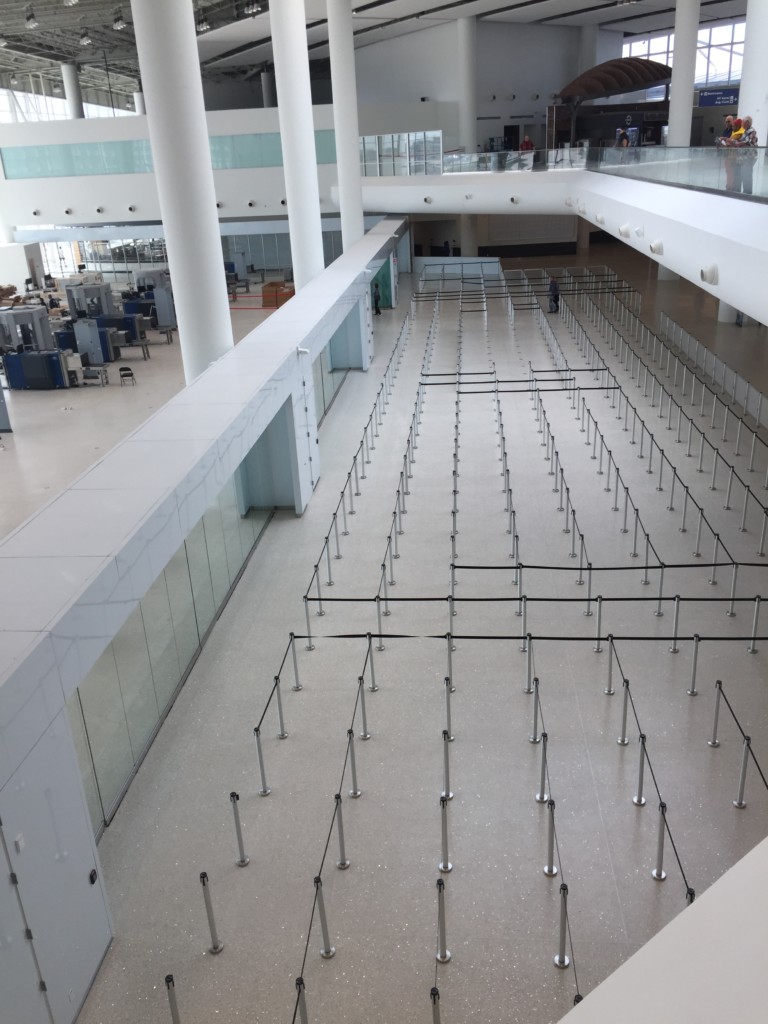 The new MSY has three concourses that each offer modern amenities such as water bottle filling stations at the water fountains, electrical outlets at about 50 percent of the seats, automated restrooms with sanitized toilet covers, family restrooms, and my favorite surprise, a Mother’s Room at each concourse equipped with a rocking chair, a changing table and a sink so mothers who desire privacy have the option to nurse babies or use breast pumps someplace beside the restroom.

The food and retail vendors are all located in the concourses, which passengers can move freely among since they are all past the consolidated security checkpoint. The list of concessions is world-class. MSY did an excellent job of featuring local restaurants and retail outlets, including them with a mix of international chains. There is also food available at a variety of price points with seating or grab-and-go options.

As you move from the security checkpoint, here are the concessions you will pass in the order they are located.

To Gate A6: Mondo, Shake Shack, Dylan’s Candy Bar, Panda Express, The Advocate, Lucky Dogs, Starbucks, Smoothie King, and Café Du Monde (with a window to watch beignets being made).

To Gate B16: (the same initially as those on the way to Gate A6, with additional vendors once you turn onto the concourse) Mondo, Shake Shack, Dylan’s Candy Bar, Panda Express, The Advocate, Lucky Dogs, Starbucks, Smoothie King, Café Du Monde (with a window to watch beignets being made), The Score Board, CNBC New Orleans, Heritage School of Music Stage, Angelo Brocato’s, Bar Sazerac, Dook’s Burgers, Mopho and Mopho To Go, City Greens, Where Traveler, Great American Bagel and Panini, Starbucks, and Emeril’s Table.

I’ll be bringing my mother to the airport in a few weeks, and I’m curious to see if I can figure out Terminal Drive on my second attempt. To be continued… 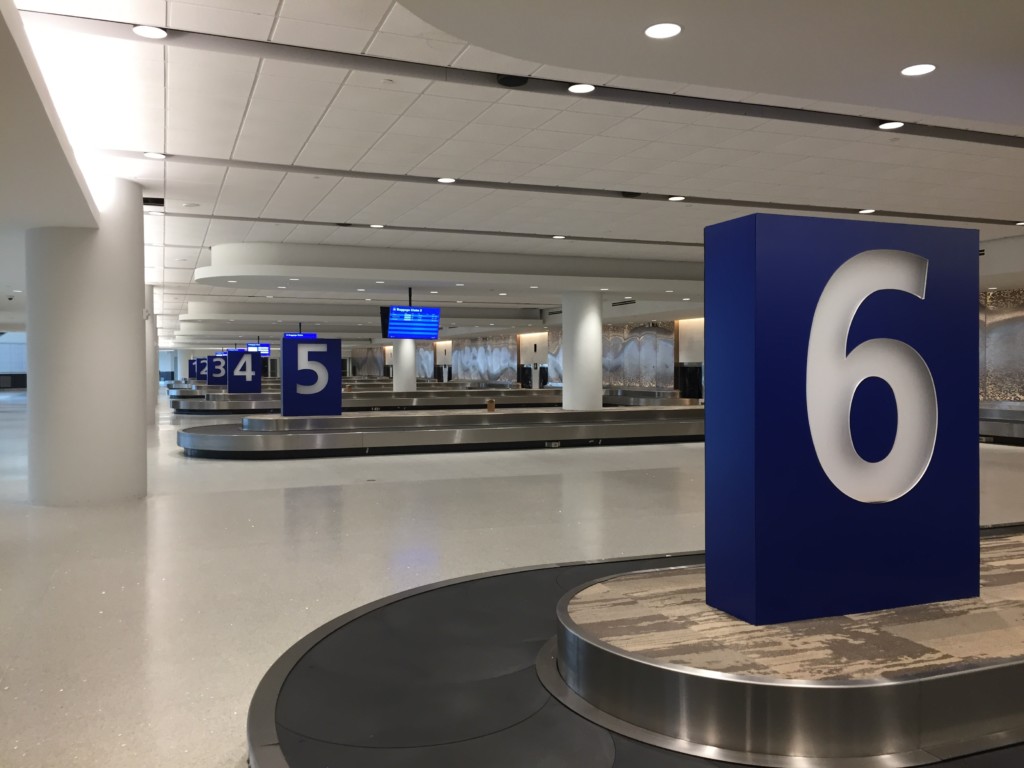