More Than Just a Bad Day

The intangibility of depression often eludes those who suffer from it, especially when they are afraid to discuss their illness with others. But depression has very real and measurable costs when left untreated—especially in the workplace.

According to a study published in The Journal of Clinical Psychiatry last year, the economic costs of major depressive disorder was $210.5 billion in 2010, a 21.5 percent increase over 2005. About half of those costs were workplace-related, such as absenteeism and lost productivity. And that doesn’t include the costs derived from other related diseases on the mental illness spectrum.

To operate more effectively and improve their bottom lines, businesses need to recognize the economic impact of depression and alleviate the stigma that surrounds it in the workplace.

epression can have both direct and indirect costs on a business. Direct costs primarily entail expenses for physical and mental healthcare services, medications, short- and long-term disability, and other expenses related to the care of the employee.

When someone has a diagnosable mental illness but does not undergo treatment, that employee can end up costing the business more for non-mental healthcare needs. People with untreated mental health issues use inpatient and outpatient services three times as much as those receiving treatment, according to a report published in Drug Benefit Trends.

Businesses can mitigate or avoid many of these direct costs of depression through preventive measures, early intervention and quality treatment.

As much as direct healthcare costs can impact a business’s bottom line, however, the indirect costs of depression, anxiety and other diseases on the mental illness spectrum can have an even more powerful negative impact.

The most common indirect costs to a business associated with depression and mental illness are absenteeism, lost productivity, employee turnover, lack of employee satisfaction, disability, increased workers’ compensation claims and safety issues. The economic burden of depression study found that about 50 percent of depression-related costs were workplace-related.

“You start putting these numbers together here, and it really has a dramatic impact on one’s bottom line,” said Dennis Miller, motivational speaker, leadership coach and author of “Moppin’ Floors to CEO,” his personal story about overcoming depression as a high-powered CEO.

The Culture of Fear

Despite the very real costs of depression, many businesses grapple with what Arwen Podesta, MD, a psychiatrist and owner of Podesta Wellness, defines as “the culture of fear.” In these businesses, employees and management are unable to communicate any concerns with their superiors because they fear being punished, written up or subject to other negative consequences. 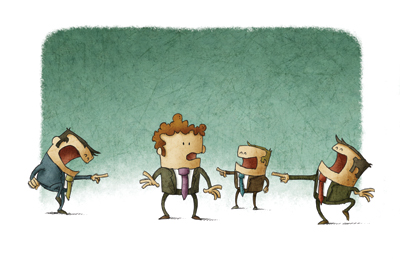 Statements like “snap out of it” or “get over it” fuel the stigma, while statements that people with a mental illness are crazy or incapable of doing their jobs prevent employees and management from being open about their struggles with mental illness.

Depression and anxiety may be labeled as mental illnesses, but they are just as much medical illnesses as heart disease or cancer. If someone shares news of his cancer diagnosis with his coworkers or boss, he may not fear the same stigma as if he were to share news of his bipolar disorder diagnosis. Promoting the idea that mental illnesses are ailments of the brain, just as a disease might affect any other part of the body, can help alleviate the stigma in the workplace.

Depression, anxiety disorders and substance abuse are actually among the most common medical illnesses, according to the American Psychiatric Foundation, and may be much more common than many people realize. It is only the stigma that surrounds mental illness that keeps it from seeming less common than it really is.

Understanding that depression and mental illness impact most people—if not directly, then through the experiences of a family member, friend or coworker—can also relieve the stigma.

“We need to realize that it’s a common part of our lives today, but we can make it better,” said Miller. “We can cope better; we can function better. We can have better employees and employers and be better spouses and parents. It needs a national effort to destigmatize it.”

Miller and Podesta agree that one crucial way to destigmatize mental illness is by upper management being more open about their own experiences. They can serve as an example of how to directly or indirectly cope with mental illness and/or demonstrate that mental illness can impact anyone at all levels of a business.

“What we need to do to end the stigma is not just tell people facts,” said Miller. “People need to begin to speak up, even chief executives. […] We can destigmatize it by the more we talk about our own story.”

“A huge piece that we need to transform, because the stigma is so high, is to be able to have some transparency from the top levels,” said Podesta. “If someone does that, it’s amazing how the culture changes, and people are more apt to get help instead of hide.”

The worst way to deal with costs of depression and mental illness in the workplace is to ignore the damage it’s causing or pretend that it doesn’t exist. Depression, if treated like any other cost in the workplace, can be handled in a smart and professional way that benefits both employees and the business’ bottom line.

“If our IT problems or our communication vehicles or websites were causing our companies to not have the ROI they wanted, they would be fixed,” said Miller. “You have to look at the economics of depression and treat it as an economic issue, just as you would with anything else.”

Depression in the Workplace: By the Numbers

Depression has tangible economic costs in the workplace.

These statistics illustrate the impact mental health has on business:

• 50% – How much of the economic burden was related to workplace costs, such as absenteeism and lost productivity, in 2010

• $4.70 – How much is spent on direct and indirect costs of related illnesses per each $1 spent treating depression

• 2.2 – How many hours of productivity people suffering from depression or anxiety lose per workday due to mental illness

On the Lookout: Warning Signs for Depression

When it comes to alleviating depression in the workplace, early identification and intervention are key. Workers should learn to recognize the warning signs of depression, but management and coworkers can also encourage individuals to seek treatment or other assistance.

• Frequent lateness to work and meetings

• Decreased quality of work, such as less accuracy, less creativity or messy presentation

• Less engagement with coworkers, management and work itself  (more withdrawn)

• Looking unkempt, such as dirty clothes or poor hygiene

• Fatigue or napping, such as falling asleep in meetings

Tips for Businesses to Alleviate Costs of Depression

The costs of depression in the workplace are as tangible as faulty IT systems or poorly targeted marketing campaigns. But what can businesses do to alleviate those costs and create a more mentally-healthy workplace?

• Dispel the culture of fear when it comes to mental health issues in the workplace.

• Encourage transparency about mental illness from the top, such as having upper management share any experience they’ve had with depression, whether personally or with a family member, friend or coworker.

• Host seminars with mental health experts about improving work-life balance and other workplace-related triggers of depression.

• Clearly define each employee’s responsibilities and expectations for his or her performance. Without a clear job description and set of expectations to aspire to, confusion can lead to depression.

• Handle any instances of harassment (physical, verbal or sexual) or bullying quickly and firmly, and make company policy on the issues well-known.

• Host wellness challenges, such as a FitBit or healthy eating challenge, to engage employees in activities that improve physical and mental health.

• When catering lunch or a work meeting, skip the fast food and sugary snacks in lieu of healthier choices, such as lean proteins, vegetables, fruits and nuts.