NEW ORLEANS – The McGlinchey Stafford Tax Team said businesses operating in Louisiana must be aware of critical new information relating to the new sales and use tax exemption and exclusion rules in the state, effective April 1, 2016.

There are different rates for state tax (but not local tax) involving a wide range of purchase, sale and lease transactions (see table below for details). The Louisiana Department of Revenue has taken a very reasonable approach to the new legislation in published guidance, the McGlinchey Stafford Tax Team said, which resolves a number of issues raised by taxpayers. They advise as the Department works through the legislation, the Department's published guidance has changed, including changes to rates. The LDR's most recently revised spreadsheet (R-1002A) shows effective tax rates as of April 1, 2016.

Changes to Sales/ Use Tax Exemptions in the Special Session

The McGlinchey Stafford Tax Team said the Department clarified its position on various issues in its recent guidance, including:

• Administrative Relief from Two Tax Rates in One Month: As enacted, the statute suspending various exemptions and exclusions for a three-month period, Act 25 (but not the statute imposing the clean penny, Act 26), was effective through July 1, rather than through the end of the fiscal year, June 30. This likely was a drafting error and may be corrected in the next special session, if there is one. In the meantime, the statutes refer to July 1. The Department has taken the position that the relevant provisions of Act 25 are effective through June 30, 2016, avoiding a situation in which a different tax rate applies during only one day of the month of July 2016.

• Department Recognition that Suspension of "Bells and Whistles" Exemptions Does Not Make an Otherwise Nontaxable Transaction Taxable: Louisiana law contains a number of exemptions and exclusions that protect transactions that are not taxable in the first instance from taxation. For example, service transactions that are not specifically identified as taxable under the law may also enjoy special legislative exemptions, which are at best in the law to avoid any doubt, and at worst, superfluous and unnecessary. Despite some initial guidance to the contrary, the Department's current guidance recognizes that the suspension of certain exemptions and exclusions does not add otherwise nontaxable transactions to the tax base. These types of transactions include attorney work product, separately stated installation charges, and charges for certain services that are provided by service providers that use equipment to provide the services.

• Lump-Sum/Fixed-Rate Contracts Entered into Prior to Change of Law: With respect to construction contracts, the Department's original guidance left blank the spaces for tax rates related to the impact of the suspension of the exemption for additional tax levied on property and services for use in fulfilling lump-sum construction contracts in existence prior to the change in the law. The Department clarified its position that the tax rate on these types of transactions is 0%. With respect to other types of lump-sum or fixed-fee or rate contracts entered into prior to the change of law, there are still unresolved issues related to fixed-rate or lump-sum contracts entered into by businesses in other industries. If this applies to you or your clients, review your contracts for "change of law" provisions that address an increase in the tax rate after the contract is finalized.

Three-Month Window: For large-dollar transactions, the timing of the transaction can result in cost savings. As a result of the session, significant, and complicated changes were made to the exemptions and exclusions available under Louisiana's existing sales and use tax laws. The legislature added a penny to the tax rate, the new "clean penny" (effective April 1, 2016 – June 30, 2018), which provides fewer exemptions and exclusions than the existing sales tax, and also suspended various exemptions and exclusions for a three-month period (April, May, and June 2016) as they related to the other Louisiana state tax imposition statutes. The changes have resulted in varying tax rates for a number of critical transactions over the next 27 months. A second special session is anticipated and new legislation coming out of a second special session may impact effective dates or change these rules, including increasing the applicable rates.

While determining your compliance obligations, note that the rate for several important types of transactions now varies during the next 27 months (beginning April 1, 2016). 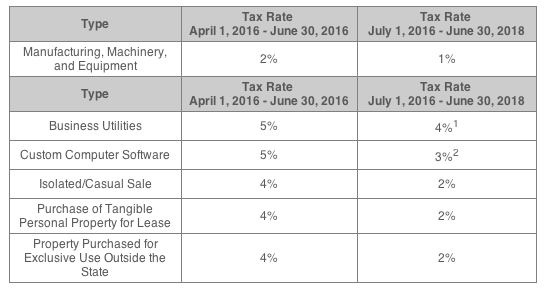 The McGlinchey Stafford Tax Team said these changes do not impact local tax rates, as local taxing authorities may have different rules for MM&E purchases and the exemption of custom software. Finally, local authorities exempt purchases for lease.