NEW ORLEANS – Mayor Mitch Landrieu opened RES/CON 2016 Tuesday, March 1, 2016, to a crowd of more than 600 attendees, speaking on the importance of resilience and how New Orleans is becoming an international leader in the field.

A three-day conference on the practice of successful resiliency and disaster management in an evolving global environment, RES/CON has attracted federal officials, international government representatives, funders, chief resilience officers, students, educators, emergency managers and more from around the globe.

During the opening session, Mayor Landrieu said, “New Orleans is the definition of a resilient city and there is no better place in the world to host an international gathering about resilience and disaster management. Catastrophic events provide an opportunity – out of necessity – to transform communities to become stronger. And RES/CON has brought public, private, philanthropic, nonprofit, neighborhood and faith-based leaders together to innovate and protect our people and our cities in ways we never thought possible.”

RES/CON 2016 features three days of education, exhibition, networking and learning, and will showcase exhibitions from 50 companies, with representatives from federal, state and local government agencies and countries from around the world.

Southeast Louisiana has become a globally recognized hub of resilience, emergency management and innovation over the past 10 years. RES/CON 2016 has attracted a previously unseen mix of disaster and resilience practitioners to explore profound and powerful topics that impact communities and economies worldwide. Guests are attending plenary sessions and group discussions as international, speakers, exhibitors, event hosts and experts are collaborating and educating each other on the best practices in all facets of community protection and crisis management.

Previously known as the International Disaster Conference and Expo (IDCE), organizers re-launched the conference as RES/CON this year to focus the event on resilience—mirroring the spirit of New Orleans and the growth it has experienced 10 years post-Katrina. IDCE has convened in New Orleans annually since 2012, and this year’s RES/CON New Orleans 2016 conference has a projected economic impact of more than one million dollars. 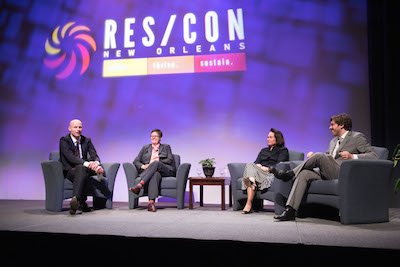