NEW ORLEANS – In his annual State of the City address Thursday, July 6, at the Civic Theater in the Central Business District, New Orleans Mayor Mitch Landrieu marked the progress the city has made over the last seven years in housing, NOPD reform, crime, jobs and recreation.

“When we entered office in Spring 2010, our work was cut out for us,” Mayor Landrieu said. “Government had become a barrier to progress rather than a catalyst to change. Hundreds of rebuilding projects were unfunded, stalled and in disarray. Our police department teetered on collapse and was set to run out of money in the middle of the year. Our city was hurtling towards financial disaster. But the people of this city have an unwavering spirit and so against all odds we kept moving forward, one step at a time. Now, we have turned the corner and are blazing a new, difficult path forward. Everywhere you look progress is being made. But we still have more work to do. None of the problems we face will be solved overnight, but when we are united—one team, one fight, one voice, one city… one step—we can make New Orleans the city we’ve always wanted it to be.”

Making the city safe has been and will continue to be our number one priority. Over the past seven years, Mayor Landrieu has done everything and more to fight the urgent and growing threat of violent crime in our city: aggressively pursuing violent criminals, reforming and investing in the NOPD, and launching NOLA FOR LIFE, a comprehensive murder reduction strategy. Law enforcement cannot do it alone, so the NOLA FOR LIFE plan focuses on prevention and gets at the root of the problem with a holistic approach.

Since 2010, the city has launched 13 new NOPD recruit classes with a total of 334 recruits. The city has also provided NOPD a 15 percent pay raise across the board, to improve recruitment and officer retention, plus an additional special pay raise of five percent to NOPD homicide detectives. Confidence in the police department is up. The Multi-Agency Gang Unit has carried out aggressive enforcement policies to get 134 indictments from 15 different violent gangs and groups. NOLA FOR LIFE initiatives have helped over 32,000 New Orleanians get assistance, whether it is finding a job or returning home after being released from prison. The city has launched Ceasefire New Orleans to focus on interrupting violence by mediating neighborhood beefs, and also a wildly successful Midnight Basketball program, which on Saturday nights has brought in off the streets over 8,000 young people and spectators. The New Orleans Health Department is working with the Children’s Bureau and other local partners including schools to connect high-risk kids to caseworkers and counseling that can help them work through their often serious problems. Though the city has come a long way in seven years, crime remains its city’s toughest challenge.

On Wednesday, July 5, Mayor Landrieu announced a new proposal to give another across-the-board pay bump to officers. Mayor Landrieu is also proposing a long overdue change to how patrol officer rankings work and how detectives get promoted.

When Mayor Landrieu took office, City Hall was only open four days a week. To improve customer service, the Administration launched the NOLA311 call center and the One Stop Shop for licenses and permits. To improve accountability, Mayor Landrieu created the Office of Performance and Accountability to implement a performance management system in which the city sets goals, tracks performance and gets better results through data-driven management. ResultsNOLA tracks performance across over 40 city departments and agencies. The city has overseen major reforms of the city’s contracting process and led a sweeping consolidation of boards and commissions. In seven years, the Administration has righted the ship of government, going from a budget deficit to a budget surplus, and the highest credit rating in city history.

The Administration has worked hard to promote economic growth and create jobs, vigorously pushing to attract major retailers, business startups and new private investments. The city helped create the New Orleans Business Alliance, the first ever public-private partnership for economic development, and the NOLA Business Alliance unveiled ProsperityNOLA, a five-year plan to drive economic growth in five targeted sectors. In the past few years, University Medical Center, the VA and the New Orleans East Hospital have opened, and now there is a biomedical corridor in the heart of New Orleans and a new asset in the East that can provide jobs for residents and great health care.

Building on that work and to address income inequality, in September 2014, Landrieu also introduced a comprehensive strategy to connect disadvantaged job seekers and businesses to new opportunities, unveiling an economic opportunity strategy and the Network for Economic Opportunity. As a result, the African-American male under-employment rate decreased from 52 percent to 44 percent. Mayor Landrieu also raised the city employee and contractor minimum wage to $10.10, setting an example for public and private bodies to pay a living wage.

Since 2010, $7.8 billion has been invested in New Orleans. Unemployment has been nearly cut in half since its peak in 2010 and over seven years, the city’s vibrant economy has created 20,000 new jobs and opened more than 140 new retail and restaurant openings. After years of decline New Orleans is one the fastest growing cities in America. After decades of starts and stops, the new $1 billion airport is coming out of the ground and will continue to be a major economic engine for the city and region for decades to come. The city is redeveloping the World Trade Center into a new Four Seasons, and opening up and connecting the riverfront for the first time in generations. A new multi-million dollar ferry terminal at the base of Canal Street will soon break ground. Recently, Mayor Landrieu announced a new blockbuster deal with the Port and Public Belt that will open up a contiguous 3-mile stretch of the riverfront, from Poland Avenue to Spanish Plaza.

When Mayor Landrieu took office, he wanted the people of New Orleans to be the ones to rebuild and believed that everyone should share in this opportunity and prosperity. But, the recovery was stalled. To get the city’s recovery back on track in the first months in office, the city identified priority projects in every neighborhood and got them off the ground and engaged FEMA in more than 900 meetings and site visits which resulted in over $2 billion in additional FEMA fund obligations. In 2011, the Administration launched the $52 million soft-second mortgage program that helped nearly 900 families buy their first homes. Mayor Landrieu fought to make sure that primary care clinics born after Katrina stay open, and in 2010 began to execute an aggressive blight reduction strategy that has reduced overall blight by more than 15,000 units.

The Administration is investing in affordable housing, specifically $1 billion to completely remake our major public housing developments. Furthermore, this Administration has fixed more streets in seven years than any previous administration. Since taking office, the city has invested over $500 million to fix our streets, completing over 133 miles of street work. The Administration has secured $2 billion from FEMA to execute RoadworkNOLA.

In 2015, the city partnered with 100 Resilient Cities to launch the city’s first ever comprehensive resilience strategy – Resilient New Orleans – a concrete, strategic roadmap for the City of New Orleans to better withstand natural disasters and to bounce back. In 2016, the city launched its Housing for a Resilient New Orleans plan, a five-year strategy to increase affordable housing in New Orleans. Because of the relentless focus on housing, the city is track to build or preserve 7,500 homes by 2018. Since 2010, homelessness is also down by 81 percent. New Orleans became the first city in America to functionally end veteran homelessness and have gone from nearly 9,000 homeless on any given night to a bit over 1,600 today. The Administration is also building a new low barrier homeless shelter at the old VA hospital. Housing, retail, bars and restaurants are popping up along the 3.1-mile linear park, the Lafitte Greenway.

Over the past seven years, the city has continued to create safe spaces for all New Orleanians to live, work and play. That’s why the city has tripled funding for recreation, partnered with the private sector to create the New Orleans Recreation Development Commission and Foundation, and invested $150 million to rebuild youth centers, playgrounds and libraries. In seven years, the city tripled the number of recreation centers from four to 12 and doubled the number of pools from eight to 16. NORD now has increased the number of kid camps from four in 2010 to 41 in 2017, serving over 4,000 kids across the city. NORD has moved from 0 teen camps to 13 teen camps, serving over 1,000 local teens. Over the past four years, over 10,600 young people ages 13 – 21 learned the value of a good day’s work through our NOLA Youth Works Summer Job Program.

At the same time, the city has transformed the way healthcare services are delivered. The New Orleans area now boasts world-class clinical care through new and refurbished hospital facilities and expanded access through a network of neighborhood based community health centers. Billions of dollars have been invested in the development of New Orleans’ Biomedical Corridor, fostering enhanced research, healthcare delivery and the development of stable, high-paying jobs for healthcare professionals. In addition to high quality health care, health in New Orleans today is about the prevention of disease and promotion of health and wellness. A broad spectrum of partners from across the community are working together to improve population health by making healthy choices easier, creating environments that promote health, and addressing factors that impact health outcomes.

As a city, New Orleans is facing two existential and immediate threats. New Orleans is a coastal city; it is surrounded by water. In the wake of the federal government pulling out of the Paris agreement, cities are taking the lead on climate change. No other city in the world has more at stake than New Orleans. Additionally, the wetlands that provide New Orleans protection from storms and define our food, culture and economy are disappearing faster than anywhere else in the world.

To address these threats, New Orleans will release its own Climate Action Strategy which includes 25 actions that will cut the city’s emissions in half by 2030, while also creating new jobs for the future. 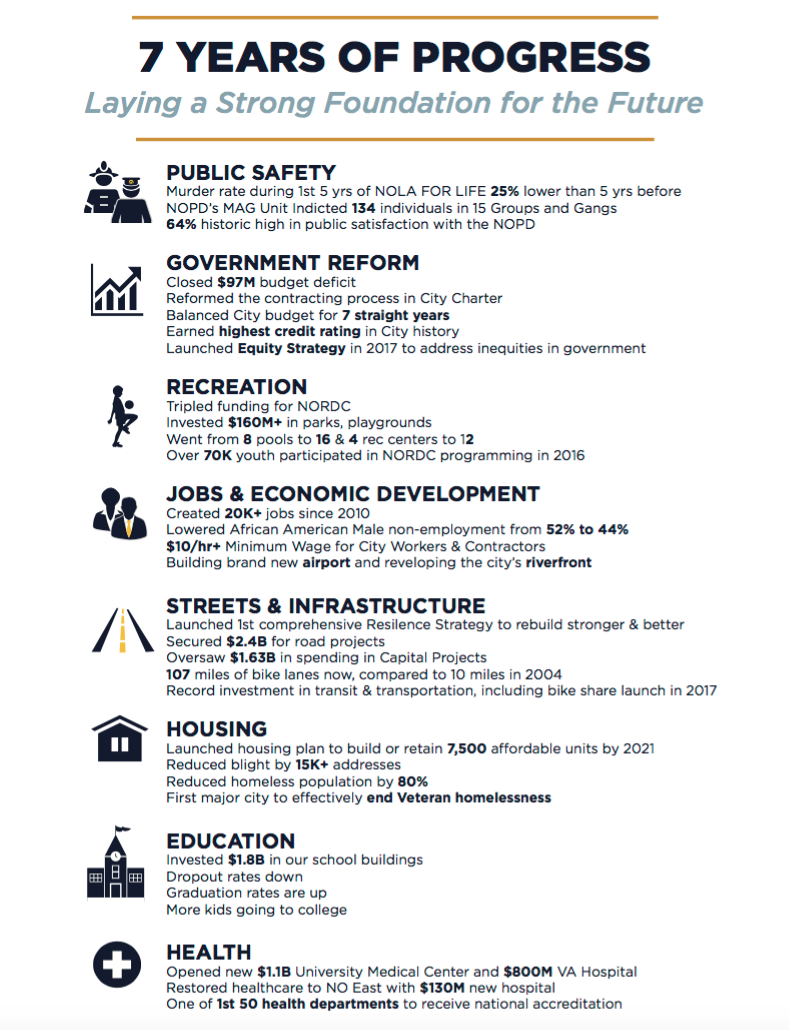