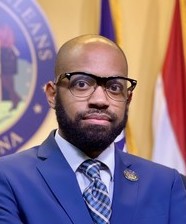 NEW ORLEANS — Mayor LaToya Cantrell announced that Jabarie Walker, formerly the director of federal relations in the Mayor’s Office of Intergovernmental Relations, will assume the role of deputy chief of staff effective immediately.

Walker will report to the newly-appointed chief of staff, Clifton Davis. He will work to identity ways to improve and expedite the implementation of priorities determined by Cantrell. Additionally, he will assist with ensuring communication and coordination between City departments continue to occur, to efficiently serve the residents of New Orleans in all capacities.

As as the director of federal relations, Walker worked to ensure that the White House and members of Congress were aware of the needs of New Orleans residents. Additionally, he functioned as the Mayor’s point person on national engagement with mayors’ offices across the country, and facilitated partnerships with national mayoral conferences.

In 2015, Walker was selected to participate in the Louisiana House of Representatives Future Leaders Internship Program (FLIP) and provided assistance to former State Representative Ledricka Thierry of Opelousas. He currently serves as a member of the Algiers Development District’s board of commissioners.