There are a lot of “must haves” for a wedding – photographer, florist, music, cake, a willing couple – but one of the latest trends hitting the wedding vendor marketplace (a $51 billion industry in the U.S. alone) is to hire a live artist.

A combination of timeless one-of-a-kind keepsake and unique form of entertainment, live wedding paintings are in demand, so much so that local artist Alexander Harvie, owner of Harvie Ventures Inc., (HarvieOilPaintings.com), says he’s constantly forced to turn down business.

Just recognized by popular wedding website The Knot as one of its “Best of Weddings” vendors in Louisiana for the second year in a row, Harvie is a frequent sight at local weddings.

Dressed in a tuxedo covered in paint splatters, he begins with a blank canvas and, while wedding-goers look on, proceeds to paint the scene before him. In typically around three hours, the happy couple is provided with a complete painting – a unique memento of their special day.

Working alongside family – his wife and fellow artist Amy serves as his company manager, while his father handles things like payroll and taxes – Harvie worked 84 weddings last year, along with 50 other types of events. He also completed more than 100 studio painting and a 25-foot mural for the Blue Bonnet Swamp exhibit in Baton Rouge.

“No, actually I was born in La Jolla, Calif.,” Harvie says. “My family later moved to Houston for a few years and then to Mandeville, where I went to junior high and high school. I went to college at LSU, and a few years later, moved to New Orleans in 2010.”

How it all began

While working as a server and bartender for a caterer in Baton Rouge, Harvie was asked to do a charity fundraiser for the Aquinas League – a tennis tournament. “I did one painting in three days of the courts and the crowds.”

While this was his first foray into live painting, his first wedding came later.

“It was actually a friend of mine who wanted one of my landscape paintings to give to his sister for her wedding,” he says. “It turned out that I didn’t have the size he wanted so I offered to do one at the wedding. So then a couple of people at that wedding saw me doing the painting and asked me to paint their daughter’s wedding ceremony. Things just kinda went from there.”

The Leap to full time

“The first year I did about two or three events, then the next year it was about five,” he says. “I started realizing it was pretty good revenue so I started doing a little more promotion through Facebook. Then I moved to New Orleans in 2010 and started getting a lot more referrals. I started Harvie Ventures Inc. in 2011.”

“Size-wise, the biggest live painting I’ve done was recently for a wedding at The Foundry,” he says. “The couple actually arrived in Mardi Gras floats. That painting was 4 feet by 4 feet and had at least 100 people in it.”

“I do a handful of ceremonies, but most of what I do is reception,” he says. “I almost always do the first dance. I’ve done a few second-lines. Those are fun. I love that every one of the paintings is so completely different.”

“Typically people just trust me to do what I think will look best, but I’ve had some requests, say, for a certain color scheme,” he says.” For instance, I had one couple that had an all-white house so they requested an all white painting.

Harvie says the best part of what he does is the live response from the crowd.

“People love it. It’s fun,” he says. “They’ll be standing behind me pointing themselves out to friends or taking pictures of me painting them. It’s definitely the most rewarding kind of work I’ve done.”

“It’s definitely picked up in the last few years, but there’s still plenty of work to go around,” he says. “It’s not an easy thing to do – to be able to turn around a completed painting in just a few hours with a whole crowd watching them. Frankly, there’s not a lot of people that can do it. I end up turning down dozens of people every week because I can only do about one per weekend.”

Harvie adds that a large live-painting movement is currently going on in Baton Rouge.

“There’s room for all of us,” he says. “I like to compare it to music. A lot of people can play the same song but their style is different, their voice is different, so it’s going to appeal differently to different people.”

I Do’s Get it done

“Weddings are definitely my principal revenue source,” he says. “Live painting is really such a great thing because it combines all the things you have to do as an artist together. You’re creating while you’re marketing yourself, and at the end you’ve made a sale. At an art show, for example, you may sell some things, but you’re not creating anything while you’re there.”

“I call my style mush,” Harvie says. “It’s really an eclectic blend of everything I’ve ever been exposed to. I start with a little Renaissance feel for the background, then there’s some blending in of cubism and impressionism, then add in some texture.”

“It helps that I have a background in graphic design, so I can do stuff like our website, and fliers and ads,” Harvie says. “We do really limited print advertising, but a lot of social media stuff. I always say if it wasn’t for Facebook, I wouldn’t have a career. It helps too, that we’ve gotten some great recognition, like from The Knot, and the word of mouth has been awesome. Some of the reviews we’ve gotten, it makes you cry they’re so sweet. These paintings really mean a lot to people because it’s their own friends and family that make them happen.”

“I’d have to say the biggest challenge is keeping track of everything,” he says. “There’s not a lot of software where you can book out years in advance. We tried Quickbooks but that didn’t work. Now I use a Microsoft Access database that my father did.”

“It’s really to be able to offer better packages,” he says. “To offer others things that capitalize on our existing product. For instance, I’d love to offer prints of the painting in case the parents of the couple want a copy for themselves, or maybe thank you cards with the painting on them.”

“We’re currently booking for 2016,” Harvie says of the demand he’s seeing for his work. “It’s unreal. We’re really fortunate that people get the concept, and they like it enough to keep calling us. As an artist, I’m in a 1 percent industry – only 1 percent of us usually make it. I feel incredibly lucky.” 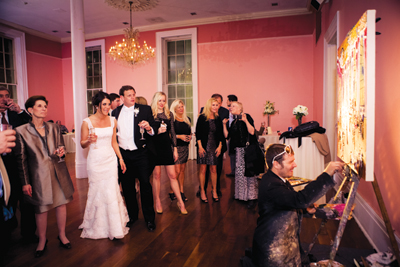