A Man Who Loves His Embossed University Shirts and Vezsla Dogs

Mark Wilson is a man proud of the universities he has attended — an impressive list that includes the University of Denver for his undergraduate degree in business/hotel-restaurant management, an MBA degree from Tulane University and the completion of a special General Managers Executive program at Cornell University. It’s no wonder he proudly wears casual shirts from all of his alma maters.

Wilson especially likes to wear his Cornell University shirt when he is taking care of his Hungarian Vizsla dogs. “I like to wear my college shirts because they bring back fun memories; to this day I am a college junkie,” he says with a smile.

Now the general manager of the Bourbon Orleans Hotel, one of six members of the New Orleans Hotel Collection, Wilson’s fashion style for work is torn from the pages of GQ Magazine. “You will always find me in a suit and tie at work, except on Fridays when I wear a sport coat,” he says. “So it’s nice to change pace and wear casual clothing when I get home.” 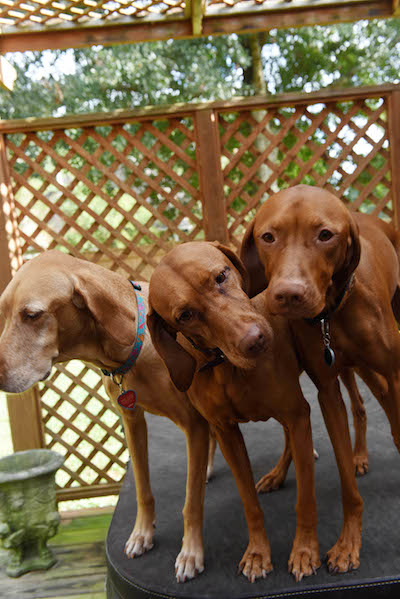 And while he has casual shirts from Denver and Tulane universities, he often favors Cornell. “I have good memories of my Cornell University experience,” he says. “I was in a group of 65 interesting people in the hospitality industry who came from China, Africa and Western Europe, in addition to many other parts of the world, for a crash course.”

Much of Wilson’s leisure time is spent enjoying his three dogs – Kismet, Rhett and Catcher (Rhett’s mother) — all Vizlas. “Rhett is four years old and holds both “Champion” and “Jr. Hunter” titles for the breed in regional competition. Catcher is 10 and she has held the “Grand Champion” national title for the breed, in addition to being invited to participate in the prestigious Westminster Dog Show,” he says with pride. “And then there is wonderful seven-year-old Kismet, our rescue dog, who doesn’t have any awards but won our hearts the moment we met her.” He is quick to add that Janice, his wife, (and the senior conference services manager at Hotel Monteleone) is also very much a “dog person.”

After being introduced to the Vizla breed at a dog show at the Cow Palace in San Francisco in 1991, Wilson purchased his first — a dog named Vizsia. He has since owned seven Vizlas.

“I thought the breed was just beautiful, so when I moved to New Orleans, I contacted a breeder in Florida who interviewed me extensively to ensure that the dog was getting a good home.” 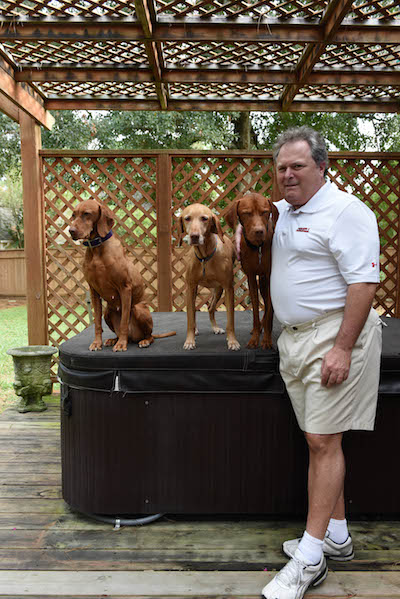 When Wilson married in 1997 it was to someone who shared his feelings for the breed. “You can be sure, Janice fell in love with my dogs, as well as with me,” he says. “They are known as ‘the Velcro’ of dogs because they stick to you with unsurpassed loyalty.”

Since both Wilsons work in the busy French Quarter, they selected a quiet retreat in Mandeville as their home. “It is easy to see why they say the Bourbon Orleans Hotel is a ‘Sanctuary in a sea of celebration,’” he says, noting that the hotel  — located steps from Jackson Square — draws many regular patrons whom he enjoys getting to know. “Our guests appreciate our location, service and dedication to pleasing them. There is never a boring day at work,” he says.

With busy careers, Wilson says the Northshore has been a good fit for the couple. “It’s been a perfect place to relax, enjoy each other and our dogs, and recharge our batteries. Even the dogs know they will get attention when they see me change into one of my casual shirts.”