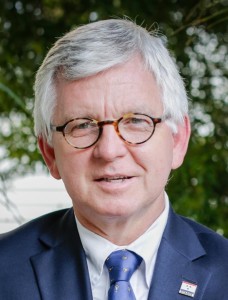 NEW ORLEANS — Tourism marketing executive and University of New Orleans alumnus Mark Romig will serve as the principal speaker at the university’s fall 2022 commencement ceremony, which will take place at 1 p.m. on Dec. 9 at the UNO Lakefront Arena.

Romig is senior vice president and chief marketing officer of New Orleans & Company, the New Orleans tourism industry’s destination marketing and sales organization. He is also the stadium announcer for the New Orleans Saints, a role he has held since 2013 when he succeeded his father, Jerry, who performed the duties for 44 years. Romig earned a bachelor’s degree in hotel, restaurant and tourism administration from UNO in 1978.

“Throughout his long and distinguished career, Mark Romig has cemented his reputation as the go-to spokesperson for the city’s tourism industry and cultural economy,” said UNO President John Nicklow in a press release. “His passion for New Orleans is only matched by his devotion to his alma mater. Not only is Mark among our most active, engaged and influential alumni, he is a thoughtful and strategic leader, and our graduates are certain to benefit from his commencement message.”

A native New Orleanian, Romig’s public relations career has spanned more than four decades and has taken him from teaching in college classrooms to the 1984 Louisiana World’s Fair, from working as a staff assistant to U.S. Dept. of Transportation Secretary Elizabeth Dole during President Ronald Reagan’s administration, and the 1987-88 presidential campaign of U.S. Senator Bob Dole, to corporate and nonprofit public relations and marketing counseling.

Romig is deeply involved in his community through his nonprofit volunteerism and charity work. He is vice-chair of the board for the Fore!Kids Foundation, which produces the annual PGA Tour event at the TPC of Louisiana, and vice-chair of the board for WYES-TV, the PBS station in New Orleans. He is also on the board of the Academy of the Sacred Heart, the UNO Foundation, Fidelity Bank, and the Advisory Board for the Louisiana Hospitality Foundation. In addition, he serves on the Federal Reserve Bank of Atlanta’s Travel and Tourism Advisory Council.

Romig comes from a family of UNO alumni; his brother Jay graduated in 1972 and his sister Mary Beth graduated in 1982. In 2016, Mark Romig was the recipient of the University’s Homer L. Hitt Distinguished Alumni Award.