Port leaders, maritime companies and agencies weigh on the challenges, investments and support needed in an industry that’s poised for greatness.

“We must build for the future,” says Gary LaGrange, CEO of the Port of New Orleans. “It’s extremely important that Louisiana officials have a laser focus on international trade, transportation and infrastructure issues.” One in five Louisiana jobs, adds LaGrange, is supported by Louisiana’s ports.

Even though the Lower Mississippi River makes up the busiest port complex in the world, the Port of New Orleans and its neighboring ports must still compete daily for cargo on both national and international scales. Port leaders say support and industry investments are both necessary to stay ahead of the global curve.

“We need the citizens of New Orleans and the state of Louisiana to understand the importance of the port and maritime industry to Louisiana and the nation,” stresses LaGrange. “It’s vital that we invest accordingly into maritime infrastructure and freight highway projects to continue to compete on a global scale.” Having the best, state-of-the-art facilities is essential to success on the global playing field, says LaGrange.

At the neighboring St. Bernard Port, Harbor and Terminal District, Executive Director Robert Scafidel echoes the need to stay ahead of the global curve. “The challenges are every day, and always relate to fiscal operations. We need more money and more support from the public and the Legislature to continue to grow.”

Upriver, Paul Aucoin, executive director of the Port of South Louisiana in the River Parishes (America’s largest tonnage port), agrees, and says he faces similar challenges. “It’s not a fair, level playing field,” says Aucoin. Aucoin says his port district faces stiff competition from countries like China that have no labor regulations or environmental standards, which, in turn, means those nations can produce products at a lower cost. “We favor a lot of these treaties with foreign companies because, if they want to enter into a trade agreement, they have to agree on all the standards including the same tariffs.”

Infrastructure investments on the state and federal levels remain the biggest challenge for South Louisiana’s port industry, including the Port of New Orleans, the dominant general cargo port. “In order for a port and manufacturers to be successful, you have to get product in and out efficiently,” adds LaGrange. LaGrange cites the $14 billion backlog of construction projects and other investments along the lower Mississippi River as reasons for making last-mile connectors a priority. Scafidel concurs. “We hope to increase the funding commensurate with the greatest river in the shipping corridor of the whole world, and each one of our ports plays a specific role.”

In an effort to meet these challenges, the purse strings are being loosened, thanks to the overwhelming passage of a $305 billion national transportation bill. Louisiana’s lower river system is among the American ports that will share a portion of the proceeds that will be distributed over a five-year period and be designated for freight and harbor maintenance. $11 billion of the funds has been allocated to freight grants and other programs, and $6.3 billion will be dispersed under dedicated formula funding for freight projects, including 1,500 miles of connections.

In addition, heated efforts continue toward deepening the Lower Mississippi River by 5 feet, to match the 50-foot draft of the Panama Canal expansion and allow for access by larger cargo ships. According to a report compiled by local economist Tim Ryan, deepening the river from the Gulf of Mexico to Baton Rouge would bring an additional 24 million tons of cargo over an eight-year period. In addition, the study projects $5 billion in new revenue for Louisiana over a 20-year period.

But that’s just the beginning of the Herculean efforts by port leaders, industry representatives, government agencies and lawmakers to build toward the future. A recent Mississippi River helicopter flyover by two key lawmakers — Chairman of the Congressional Transportation and Infrastructure committee Bill Schuster and Louisiana Congressman Garret Graves — is expected to increase critical legislative support. Aucoin, who was part of their congressional committee panel in New Orleans, was there for the bird’s-eye view. “It’s unbelievable, man, it’s unbelievable,” he says. “When you look down from a helicopter it looks like traffic on Canal Street. The fly over the river was beneficial for us so they can understand what is going on here in South Louisiana.”

“The investment boom on the Lower Mississippi River is a game changer for the future,” says LaGrange, referencing the more than $80 billion of investments in new and expanded chemical and petrochemical projects and manufacturing facilities. While the Calcasieu River in southwest Louisiana will also benefit from the investments, the Port of New Orleans is expected to gain 5.4 million tons of chemicals exports, which would be three times its current rate.

Construction of nearly $40 million in new investments aimed at expanding container-handling capabilities is expected to be completed at the Port of New Orleans’ Napoleon Avenue Container Terminal by the end of 2016. Among those projects is a $7.9 million refrigerated container racking system to help accommodate the increasing demand for refrigerated cargo. The state-of-the-art system is designed to store more than 600 refrigerated containers.

In the more immediate future, there’s another project which port officials believe will make a huge difference economically for South Louisiana and the Port of New Orleans: the new $25.1 million Mississippi River Intermodal Terminal. Construction of the 12-acre facility on existing port property is expected to be completed by the first quarter of 2016, and this modern intermodal container transfer terminal will help move marine and rail cargo efficiently, while at the same time increase the port’s container yard capacity. LaGrange says it will also enhance safety and reduce the carbon footprint of the regional and national transportation system. 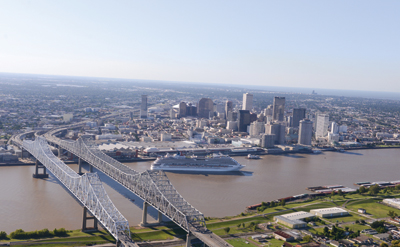 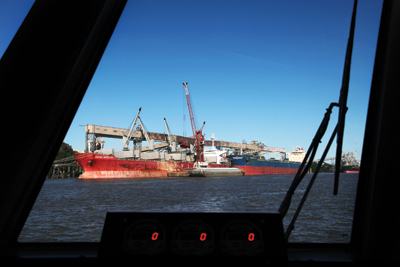 LEFT: The Port of New Orleans’ mounting cruise business is also receiving new infrastructure with the construction of a third cruising ship berth at the Poland Avenue Wharf. RIGHT:The Port of South Louisiana is expected to announce $23 billion in new projects this year.

The port’s mounting cruise business is also receiving new infrastructure with the construction of a third cruising ship berth at the Poland Avenue Wharf. The engineering phase, including final touches, is underway, with the terminal expected to be completed in 2017. “That project will free berthing space for additional homeported cruise ships and allow port officials to aggressively market New Orleans as a unique port of call,” says LaGrange. In addition, American Cruise Line is adding America, a third steam wheeler, to its New Orleans fleet, and according to LaGrange, Viking Cruises will open its first North American home port in New Orleans in 2016.

Efficiency upgrades and expansions are also taking place up and down the river. At the Port of South Louisiana, “$66 million in capital investments will be taking place within the port’s jurisdiction over the next five years,” says Aucoin, “and unlike the past, many of those investors come from foreign companies.”

New infrastructure work is taking place this year at the Port’s Globalplex Terminal in Reserve, and Aucoin says a whopping $23 billion in new projects is expected to be announced this year for the port’s district. “We expect two to three of those new projects to start construction in 2016, including construction of the Pin Oak liquid storage terminal and Yuhuang Chemical’s methanol project.”

Plus, if proven to be a profitable venture, the Port of South Louisiana may soon be in the container business; Aucoin is expecting results from a container market study for the port’s district to be in by the middle of the year. “It would make the operation highly profitable, and it would be very competitive with any other container port. That’s what we expect the study to show,” he says.

Adding to the economic development of the port is the effort to have more corporate jets land at its airport, which now has a 5,000-foot runway. “We are trying to make it easier and a more attractive place for companies from around the globe to locate here.” Since the extended runway is now published with the FAA and in pilot’s manuals, Aucoin says he’s seen an increase in the number of corporate jets utilizing the airport, and he expects to see many more in 2016.

Above all, Aucoin says the industrial growth at the port is because of plentiful and low-cost natural gas, as well as the deep water of the Mississippi River, which he considers to be the greatest of Louisiana’s natural resources. Aucoin expects the availability of inexpensive natural gas to continue for the next 20 to 30 years, which is great for companies wanting to do business in south Louisiana.

Port directors predict an economic upswing in the industry. “I see a vibrant port with new opportunities arising from value-added services for the chemical manufacturers, plus expanded infrastructure doubling existing container volumes through the Port of New Orleans and new, untapped opportunities with an expanded Panama Canal,” says LaGrange.

Scafidel shares that optimistic view. “The outlook for the five river ports is outstanding! We project that we will continue to have financial growth, and that growth will spill off into other areas, which will continue to fuel the economic engine of those respective parishes and ports.”

“I’ve been around the block a few times,” says Dale Revelle with a knowing smile. The owner of Revelle Shipyards says he’s worked on the water in New Orleans since he was 12 years old. “Business is low and competition is very aggressive. Everyone is looking for that deal.”

Revelle says some companies are paying local steamship agents, like him, lower rates for moving their vessels, depending on which lane is being used to move the cargo. “It’s down anywhere from 30 to 80 percent. We are also running out of places on the river to do the work, and the rates are so outrageous that it’s cost-prohibitive.”

The slowdown has Revelle coming up with creative ways to bring in income. “We went out to our clients to see if we can help them in any other way, and this is how we are maintaining our business,” adds Revelle. Sharing the same challenges are some tug companies, stevedores (dock workers) and other companies whose job is to load and unload vessels.

The turnaround can’t come soon enough for Revelle. “I’m hoping it will happen in a couple more years, but we are not sure which sector will be coming back. It may be metals, steel or fertilizer. There are a lot of different working parts here.”

According Brett Bourgeois, with the New Orleans Board of Trade, Ltd., a maritime-advocacy group that also tracks vessel arrivals, the numbers are up. Vessel arrivals have increased steadily since Hurricane Katrina. “I think 2015 will end up with 100 more vessel arrivals than we had in 2014, and we hope this trend continues into 2016. And containerized vessels will continue increasing as they have in previous years,” says Bourgeois.

The collective wisdom seems to suggest that those companies who stay the course will reap the rewards in the future. “If they can hold on, they should benefit greatly from this industrial boom we are going to have,” says Paul Aucoin, the executive director of the Port of South Louisiana.

Bourgeois echoes the same advice: “Keep working hard, keep plugging away to bring more business to the river because ships and cargo are always going to come into the Mississippi River, our wonderful natural resource,” says Bourgeois.