Making a House a Home

On Oct. 2, the Sazerac House opens as the first true homeplace of the largest manufacturer of distilled spirits in the nation. 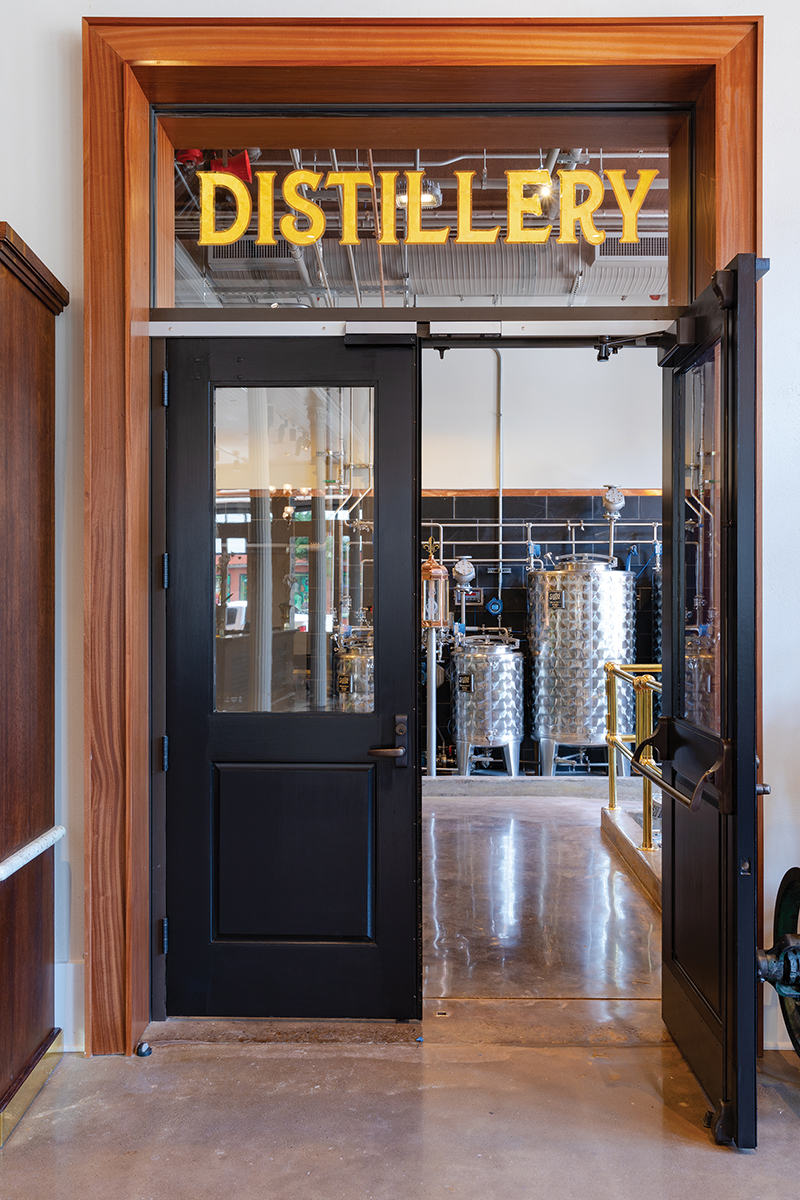 The Sazerac, an iconic New Orleans cocktail, is about to occupy a brand-new (yet well-aged) stage.

On October 2, a historic site at the intersection of Magazine and Canal Streets opens to the public as the Sazerac House. The newly renovated 48,000-square-foot building (which dates to the 1860s) will bring something unique to the local landscape: a combined beverage museum, event space and fully functioning distillery.

The space features hands-on exhibits and experiences designed to educate visitors about the history of the Sazerac Company and its role in the evolution of cocktail culture. In true New Orleans fashion, tours will also include complimentary samples of Sazerac products.

The Sazerac Company proudly traces its roots to a spot just a stone’s throw from the new location. The Sazerac’s highly visible flagship will honor the birthplace of both the company and its namesake drink.

“With our origins dating back to 1850 here in New Orleans, the Sazerac Company has long wanted to create a homeplace here in this city,” says Sazerac House General Manager Miguel Solorzano. “We have created similar homeplaces for several of our other distilleries, including our flagship Buffalo Trace Distillery in Frankfort, Kentucky. We were so pleased when the opportunity finally presented itself in such a fortuitous location, just 350 yards from the original Sazerac Coffeehouse.”

There is no Sazerac Company without the Sazerac cocktail, and the organization takes that legacy seriously. The story begins in 1838 with Antoine Peychaud, an apothecary who operated a French Quarter pharmacy. Peychaud developed a blend of brandy, absinthe and homemade bitters that became popular in drinking establishments across the city, including, most notably, the Sazerac Coffeehouse on Exchange Alley.

In 1869, the Sazerac Coffeehouse was purchased by Thomas H. Handy, who also bought the rights to Peychaud’s Bitters. Substituting rye whiskey for brandy, he began bottling and marketing a new creation — the Sazerac cocktail. Handy’s former secretary eventually went on to charter the Sazerac Company.

In 1948, the Sazerac Company was acquired by Stephen Goldring and Malcolm Woldenberg, partners in a growing wholesale liquor and distribution business who came to embrace the city of New Orleans as their personal and professional home. Over the next several decades, the pair would build an extraordinarily successful business empire and far-reaching philanthropic presence that continues to this day, with foundations named for the two families supporting a broad range of causes in New Orleans and beyond.

Today, Stephen’s son, William “Bill” Goldring, serves as the chairman of the Sazerac Company, which remains independent and family-owned. Along with his family, Goldring has overseen the company’s extraordinary growth into new markets and new brands, including several award-winning bourbons and whiskeys.

The Sazerac Company’s ever-expanding spirit portfolio includes Buffalo Trace, Pappy Van Winkle, Eagle Rare, Blanton’s, Southern Comfort, Fireball and of course, Sazerac Rye and Peychaud’s Bitters, among more than 300 others. Given its increasing focus on bourbon and whiskey, Sazerac has built up a strong operational presence in Louisville, Kentucky, but the company maintains operations in Louisiana, as well as Virginia, Tennessee, Maine, New Hampshire, Maryland, California, the United Kingdom, France, Australia and Canada. While the private company does not share economic data, the organization is believed to employ roughly 2,000 people and generate annual revenues of around $1 billion.

The Sazerac Company has also followed the particular tastes of the New Orleans market, ensuring that its portfolio counts not only the ingredients for a classic Sazerac cocktail, but other local favorites as well. One such example is Ojen, an anise-flavored liqueur traditionally enjoyed during Mardi Gras. The product disappeared from shelves in the 1990s after a Spanish distiller stopped producing it, so the Sazerac Company came to the rescue with their own version, Legendre Ojen, allowing New Orleanians to enjoy their cherished Carnival quaff once again. 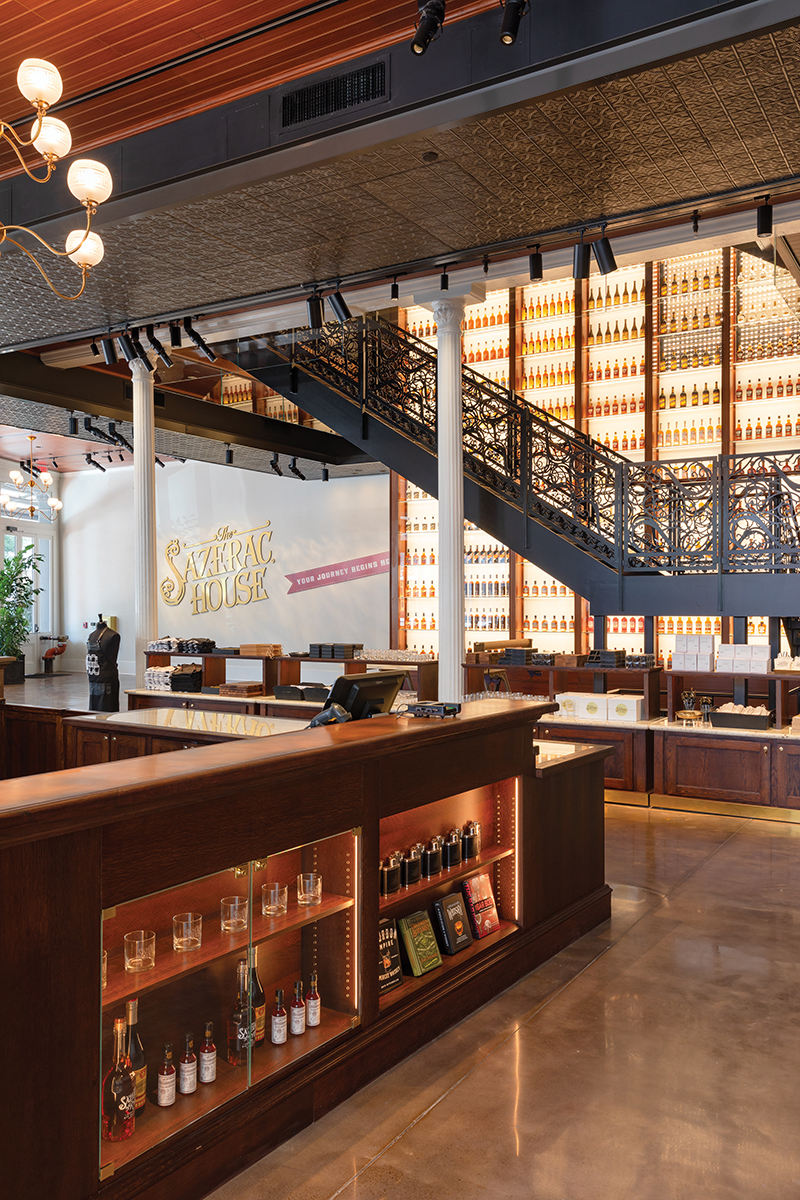 There is a House in New Orleans…

Sazerac House’s location — just blocks from the Royal Street site of the original Sazerac Coffeehouse and one of the original warehouse spaces for Peychaud’s Bitters (now the Eliza Jane Hotel) — was a major draw for the company. The project’s leaders have been careful to honor and preserve the building’s historical integrity.

“Being able to house this experience in a historic building that dates to around the same timing as the beginnings of the Sazerac Company made this especially significant,” says Solorzano. “Guests will be able to truly envision themselves in the era of our origins in this completely restored building that even includes many parts of the original structure — like the floorboards, historic staircase and ground floor columns.”

Solorzano says the renovation of Sazerac House will breathe new life not only into a long-vacant building, but to its surrounding area.

“The Sazerac House will bring activity to a section of Canal Street that has been vacant for more than 30 years, tying the rest of the historic heart of downtown New Orleans into new projects that are being developed further towards the river, while creating a completely new and interactive experience for tourists and business visitors alike,” he says.

Apart from making the streetscape more attractive, the project has already had a significant economic impact for the city. According to Solorzano, 60 employees will be based in the Sazerac House, 45 of which are new positions within the company. Since construction began in 2016, the project has employed hundreds of workers through local firms including Trapolin-Peer Architects, Ryan Gootee General Contractors and Solomon Group.

This is not the Sazerac Company’s first experience with restoring a hidden gem. Solorzano points to the company’s 1992 purchase of Buffalo Trace Distillery in Kentucky, complete with ramshackle buildings, barbed wire fences surrounding the property and an employee base which had dwindled to 50 – down from a workforce of 1,000 employees during the post-World-War-II boom.

Today, the restored Buffalo Trace Distillery is one of only 2,600 national historic landmarks in the United States, employing 450 team members and welcoming 250,000 visitors annually.

As visitors make their way through complimentary, self-guided tours of the Sazerac House, they will encounter a variety of attractions, including an interactive exhibit in which bartenders share information about drinks popular in New Orleans during various historical periods. “Experience Ambassadors” will be stationed at key points along the route, and a gift shop will offer cocktail-related merchandise, as well as spirits for purchase. Visitors will also be able to enjoy the rum aging and tasting rooms.

Given a market that shows continued enthusiasm for spirits and cocktail culture in New Orleans (the Museum of the American Cocktail at the nearby Southern Food and Beverage Museum remains a popular draw), as well as the Sazerac House’s visitor-friendly location, planners anticipate 150,000 visitors during the venue’s first year.

In addition to welcoming visitors for tours, the Sazerac House includes 3,500 square feet of event space with capacity for up to 300 private event guests. Future programming and events will be geared toward both locals and out-of-town guests.

Perhaps the most eye-catching feature of the Sazerac House is its custom-built, fully functional whiskey still. Located on the first floor and visible from Canal Street through a two-story glass front, the 500-gallon still was built for the Sazerac House by Vendome Copper and Brass Works in Louisville, Kentucky.

With the addition of the Sazerac House to the downtown scene, tourists and locals alike will enjoy a new way to experience one of the city’s most famed creations, and The Sazerac Company now has the perfect home within the city that put it on the map. 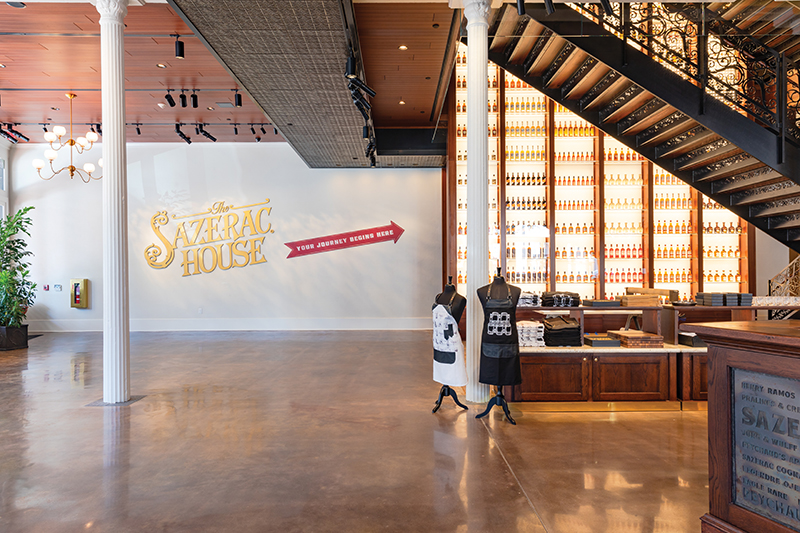 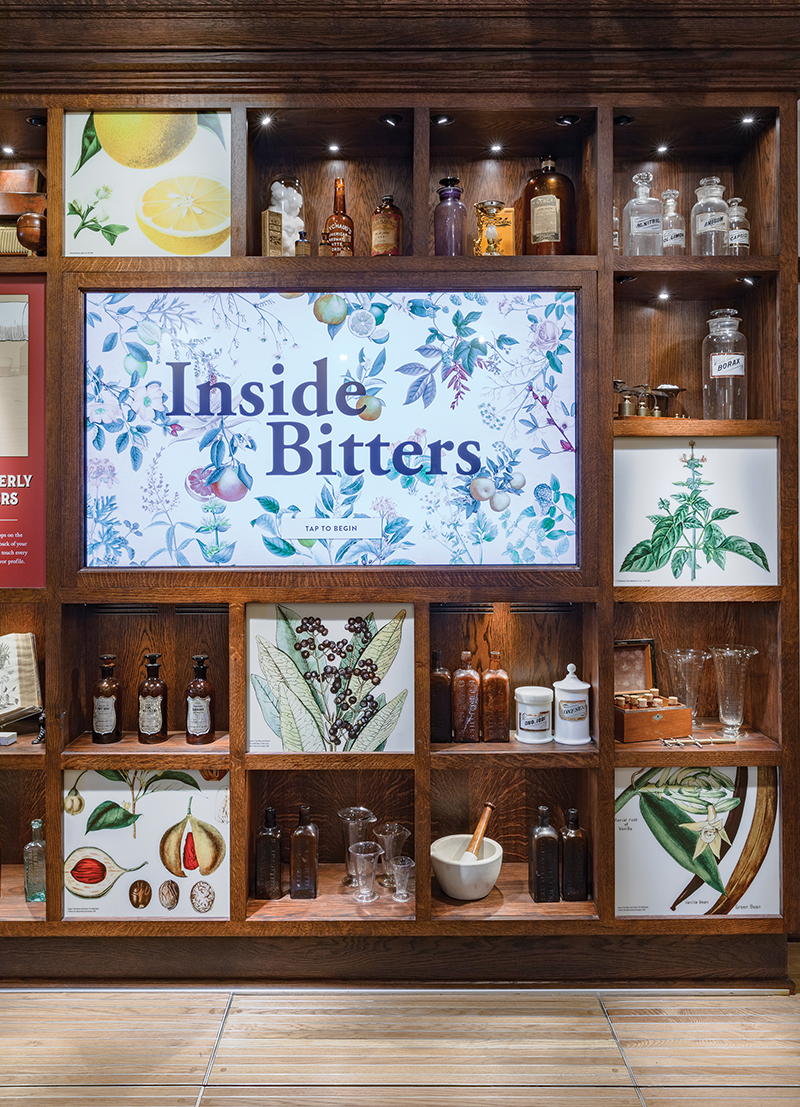 Pack an Old-Fashioned glass with ice. In a second Old-Fashioned glass, place the sugar cube and add the Peychaud’s Bitters to it, then crush the sugar cube. Add the Sazerac Rye Whiskey to the second glass containing the Peychaud’s Bitters and sugar. Empty the ice from the first glass and coat the glass with the Herbsaint, then discard the remaining Herbsaint. Empty the whiskey/bitters/sugar mixture from the second glass into the first glass and garnish with lemon peel.
(Source: Sazerac.com)