At the Lower 9th Ward Market, hope is still alive.

There’s nothing fancy about the Lower 9th Ward Market.

A dark brown, one-story building adorned with hand-painted signs, it sits alone amid empty lots in an area of New Orleans where the memories of Hurricane Katrina hang thick as the summer air. Even the small adjacent parking lot remains in ruins — just one of the countless reminders of the devastation that occurred almost 10 years ago.

Stepping into the store, visitors are greeted by a wide array of items arranged in three aisles along handmade shelves and milk crates. A small rack by the register holds various children’s clothing items, while a table adorned in a cheery balloon-patterned plastic tablecloth holds big white plastic bowls, each bearing a small collection of fruits and vegetables. There’s no central air conditioning, but a small A/C unit hums along a side wall.

“We’ve got everything here,” beams owner Burnell Cotlon, “from dog sweaters to diapers, flashlights to fresh fruit. It’s really more of a general store than your typical grocery store.”

It’s true, the Lower 9th Ward Market is not your typical grocery store — there are no grocery carts, no electronic belts moving items along — but for the people of this neighborhood, it’s all they have, and it’s enough to give them hope. 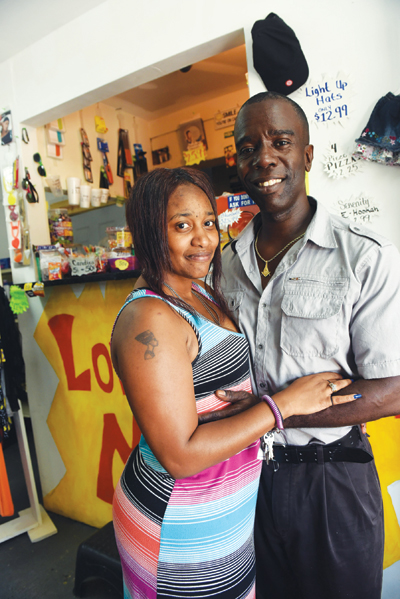 Keasha and Burnell Cotlon — the force behind the Lower 9th Ward Market (above), the area’s first grocery store post-Katrina

“I’ve had people come in here and burst into tears,” Cotlon says. “They’re just so grateful to finally have somewhere to go to get the things they need. Ten years later, we’re still the only store this side of Claiborne.”

“There was never a question we were going to return — this is our home,” he says. “But when we came back, there was nothing much to come back to.”

In an area where many live without a car, relying solely on public transportation, just getting a gallon of milk could take half the day.

“The nearest grocery store was the Walmart in Chalmette, and it took three buses to get there,” he says, “so my wife, Keasha, used to drive around picking up the elderly in the area and drive them back and forth.”

Years later, nothing had changed.

“It’s been one of those things,” he says. “The big-box stores say there aren’t enough people to support them opening a store, but then the people can’t come back if there’s nowhere for them to get goods and services,” he says. “It’s a real catch-22.”

Five years ago, he says, he’d had enough.

“Somebody had to do something, and I guess we were those somebodys,” he laughs.

Never having even worked in a grocery store — Cotlon spent 12 years as an MP in the Army before managing a McDonald’s and Family Dollar Store — he decided to gamble his entire life savings on a dilapidated building just around the block from his home.

“You should have seen this place,” he says. “It was a real mess. But it’s 6,000 square feet, and it’s zoned for three stories. There’s room enough to do whatever we want.” 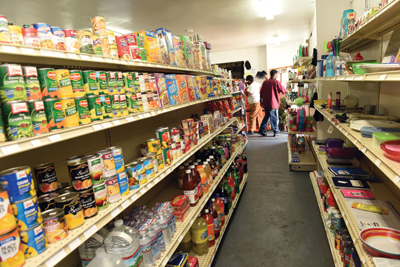 The three-aisled grocery store includes a mix of perishable and non-perishable foods, along with simple housewares, clothing, toys and hardware. “It’s more like a general store,” says owner Burnell Cotlon.

But first, there was a lot of hard labor, most of which Cotlon did with his own two hands.

“I couldn’t afford to pay someone to remove the damaged roof, so I had to do it myself,” he says. “Everyday I’d be up there, sunup to sundown. Keasha would throw water and food up to me to keep me going.”

In 2013, volunteers from Marquette University decided to join in the effort, with a group of students working over the course of a week, putting up Sheetrock, painting, anything Cotlon needed. “They just kept returning, about every five or six months,” he says.

A wall just off the grocery area bears handwritten messages from past students.

“In a world that is filled with despair, you guys are the light,” says one. “Thank you for being a ray of hope,” says another.

Finally, in June 2013, Cotlon’s dream for the Lower 9th Ward Market began with the opening of the Cross the Canal Beauty and Barber Shop in the same building. The shop currently employs three people, including a women’s stylist, who started in late May.

In April 2014, the second segment of the Lower 9th Ward Market was ready for business – Galvez Goodies — which Cotlon refers to simply as the sweet shop. The small window in the middle of the building invites locals to enjoy poor-boys, french fries, hot dogs or frozen cups.

“We’ve had people come here from as far out as Algiers to get a snowball,” he says. “They tell us how happy they are to see what we’re doing here.”

After about seven months running the sweet shop — and doing odd jobs around the neighborhood to pick up some extra cash — Cotlon finally earned enough money to open his grocery store.

Without the benefit of a single government grant or a dime of Katrina money, the first grocery store in the Lower 9th Ward opened at 2036 Caffin Avenue opened November 15, 2014.

“Looking back, I can see that we were completely crazy,” he laughs. “I guess we’re still crazy today, but it’s all been worth it.

Cotlon says he buys his wares from local discounters like Costco, Sam’s Club and Restaurant Depot. “I do a small 20 percent markup to pay for my employees and keep the lights on, but that’s all,” he says. “I want it to be affordable.”

Thanks to the area’s food desert status, he says finding locally grown produce has been easier than he anticipated. “A lot of people started growing things after Katrina in their backyards, out of necessity, so of course we try to buy from them whenever we can.”

Cotlon says his inventory is constantly expanding, driven by consumer demand. He points to a sign near the register that reads, “If you don’t see it, ask for it.”

“I tell people that all the time,” he says. “We’re here to give them what they need.” 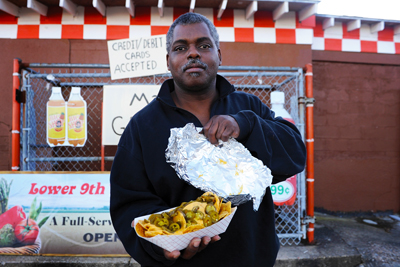 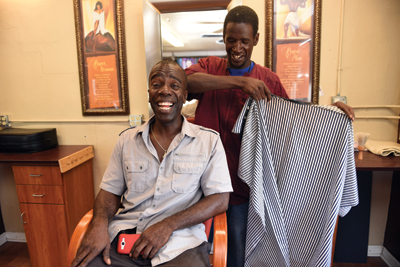 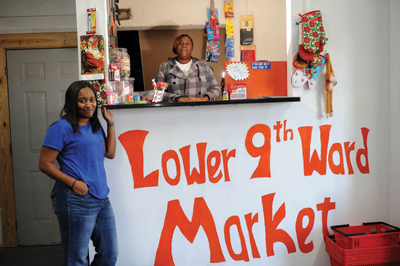 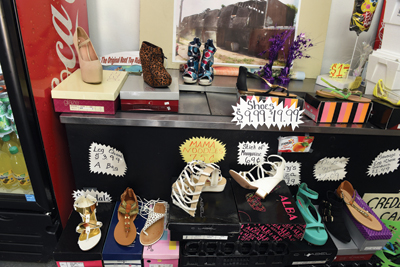 Although all three of the market’s businesses operate the same hours — 11 a.m. to 7 p.m. Monday through Saturday — Cotlon says the grocery store often keeps him onsite until past 10 p.m.

“People just keep coming in needing things,” he says, “and I guess I can’t say no.”

From the beginning, he says, the threat of crime was always there, noting he used to spend nights sleeping on a bench inside the sweet shop to keep an eye on things.

“We haven’t had a single issue,” he says, smiling. “Even the hardcore gangster thugs will come by and call out, “Burnell, you OK?” They see what we’re doing here and they’re happy about it. It’s a convenience for them as well. We truly have the support of the whole community.

The support is definitely there, but the funding has been slow to follow.

In late April, the Cotlons took home first place at PitchNOLA: Living Well, a pitch competition sponsored by Propeller: A Force for Social Innovation. The win came with a $5,000 grant that enabled Colton to buy a small refrigerator to store perishables like meat, fruit, cheese and milk and a bounce house for the neighborhood kids.

Every little bit helps, says Colton, who remains fixed on the future.

“I know people look at this place and they see one story, but I see three, he says, adding that the next step will be to renovate the second story, where he envisions a self-service laundry and a notary public. “It’s all money,” he says. “We just don’t have it — yet.”

What he does have, finally, he says, is Internet.

“We just got it,” he says, “because we finally got approval to start accepting EBT — food stamps. People have been asking and asking, and now we can finally say yes.”

No, it may not be fancy, but the Lower 9th Ward Market is getting the job done, thanks to the tireless work of one local couple willing to take a chance when no one else would.

“As we said in the Army, anything is plenty,” he say. “I can’t stand complaining. There’s always an answer.”