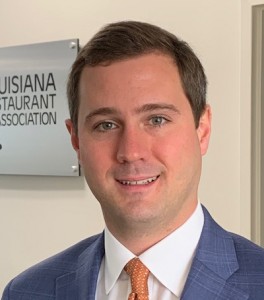 METAIRIE — The Louisiana Restaurant Association has announced the hiring of Will J. DuBos as its director of government and public affairs. His role will focus on supporting the LRA’s interest in state and local issues, the Louisiana Legislature and the executive branch. Additionally, he will serve as staff executive for the LRA’s Hospitality Political Action Committee, which supports industry-friendly elected officials and candidates across the state.

“When we decided to enhance our advocacy approach, we chose to create a new position that would provide year-round engagement at the State Capitol and across the state to bolster the relationships that I built as CEO and our contract lobbyist team supported,” said Stan Harris, president and CEO of the Louisiana Restaurant Association. “Finding someone with Will’s education, background, and existing relationships should help elevate our industry’s voice. We are pleased to welcome him to our team.”

The son of Margo and Clancy DuBos, former longtime owners of the New Orleans alt-weekly Gambit, which covers Crescent City politics and restaurants, DuBos developed a love for politics and good food at an early age.

“Food and politics were the two most frequent topics of conversation in our home,” said DuBos.

DuBos is a licensed attorney with experience in governmental relations, most recently, for Advanced Strategies Inc., representing the Louisiana Video Gaming Association and the Franciscan Missionaries of Our Lady Health System. DuBos previously worked at Top Drawer Strategies after graduating from Louisiana State University’s Paul M. Hebert Law Center in 2019.

While an undergraduate at LSU, DuBos worked as an aide to former Senator Danny Martiny and then messenger in the Louisiana State Senate. There, he developed knowledge of the legislative process. By the time he entered law school, he had honed his political instincts, particularly while working for four years as the aide to former State Senate President John Alario Jr.