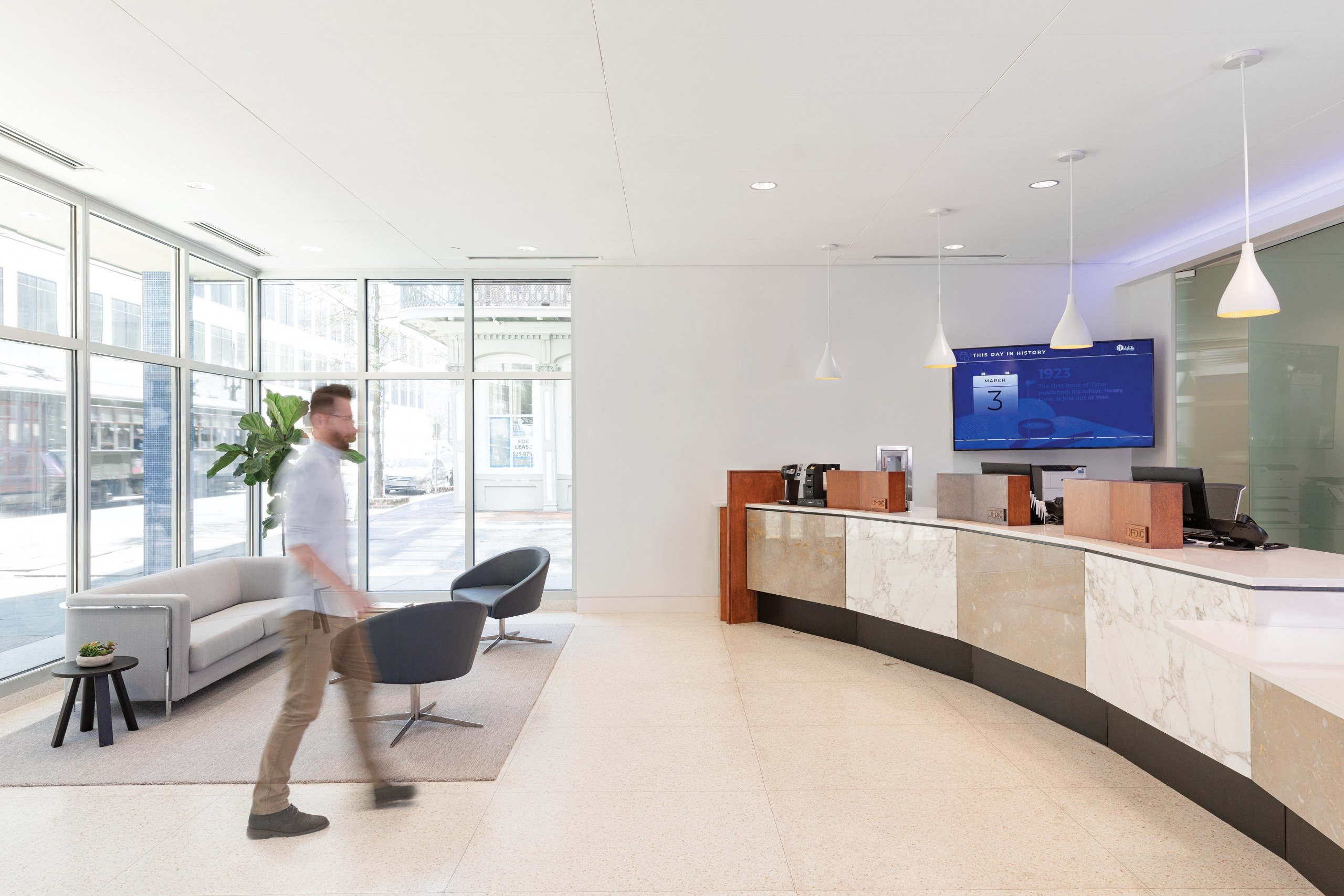 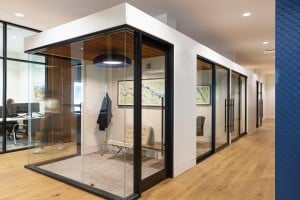 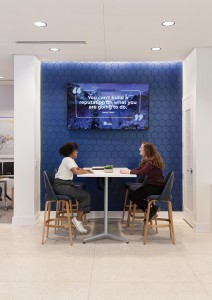 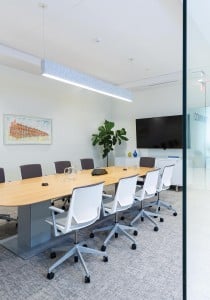 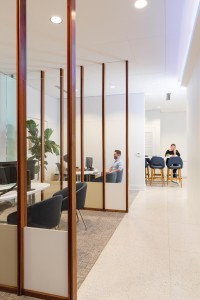 The development of the office floor plan was driven by the need to provide the associates with the privacy needed for day-to-day operation while maximizing light distribution through the space. Andrea Ford, Trapolin Peer lead designer and architect

Anchoring the corner of Carondelet and Perdido streets is what appears to be a decidedly midcentury modern building. But as façades are wont to do, its exterior is deceiving. Rather, the building — now home to a new branch and headquarters of Fidelity Bank — was originally constructed in the 1850s, whereas the midcentury façade arrived with a later renovation. According to the Preservation Resource Center of New Orleans, the building was designed by Scottish-born architect George Purves, as part of a collection of structures known as Union Row.

The PRC reports that Union Homestead Association moved into the building in 1910. “In 1958, the bank — then called the Union Savings & Loan Association — expanded into the next building and combined the two spaces by replacing the dividing brick wall with steel beams and columns,” writes Davis Allen in a 2019 article for Preservation in Print. “The building was then covered with its current façade — a midcentury modern slipcover designed by August Perez & Associates.” Unfortunately, the façade — while lending the building a stylish, modern sensibility that belied its years — also contributed to its deterioration. Bearing that in mind, historic preservation was at the heart of the project.

“Fidelity is a local business rooted in the city, which is why this rehabilitation in the CBD was so important and exciting,” said Trapolin Peer lead designer and architect Andrea Ford. “It was a way to show New Orleans they were invested in the city.”

Ford said the design team’s biggest challenges were to transform the “dark, windowless center of the building” but not “dramatically alter the nature of the historic façade.”

“At its core, this is a bank branch and headquarters,” says Ford. “But layered in was an adaptive reuse/historic renovation that by nature layered in unique elements that no other bank will have. The branch features original ’50s terrazzo floors, a refurbished vault door, wood slat office dividers and a curved- marble clad teller desk.”

To combat the dim lighting conditions in the center of the building, Ford says the team employed a mix of transparent and solid wood veneered panels.

“The headquarters — while professional — lends itself to the midcentury character of the building,” says Ford, citing the warm woods, midcentury style furniture and unique New Orleans-based artwork. “The development of the office floor plan was driven by the need to provide the associates with the privacy for day-to-day operation while maximizing light distribution through the space.”

According to Ford, the design’s standout elements are the conference rooms, phone room and meeting spaces. She says they lowered the central space of the conference rooms from the ceiling, creating a “light shelf” to transmit light farther through the space, and acoustic ceilings and light fixtures were also employed to maximize sound absorption for meetings.

“[Our goal was to] maintain the historic integrity of the ground floor and incorporate as many midcentury design elements as possible into the new layout to create a cohesive design from the exterior to the interior,” says Ford. “We wanted every part of the building — from the exterior façade to the last finish — to all speak to each other. [Fidelity has] the utmost respect for their clients and put their security and privacy at the forefront of what they do — which guided a lot of the design decisions.”