At most breweries the tanks and production area are visible to visitors, so in that regard, Wayward Owl Brewing Co. isn’t doing anything out of the ordinary with its design. What is uncommon is the actual building in which the brewery is housed.

In November 2016, Wayward Owl opened in the historic Gem Theater in Central City. The Gem was designed in 1948 (or 1947, depending on where you look) by notable Louisiana architecture firm Dreyfous and Seiferth (formerly Weiss, Dreyfous and Seiferth), which is known for the towering art deco-style “new” Louisiana State Capitol building in Baton Rouge commissioned by Gov. Huey Long, as well as the Pontchartrain Hotel and the Lakefront Airport in New Orleans, to name a few. The art deco-style theater opened in 1951. It is known as the area’s last black theater. After sitting vacant and without power for more than 11 years, Wayward Owl’s husband-and-wife owners, Justin and Kristin Boswell, flipped on the lights, beginning the second act for this local gem.

“The perimeter was in perfect shape,” says Justin Boswell. “There was a floor, but the interior was sunken for the slant, because it was a theater. It was a lot of work.”

For the restoration, the Boswells worked with developer — and the building’s owner — Greg Ensslen of Go Mango Neighborhood Restoration LLC and engineer Glenn Schneider.

“I drew the bar, the cooler, the layout for the tanks,” says Justin Boswell, a Lafayette native, who worked as a brewer for Black Raven Brewing in Redmond, Washington, before moving back home to start his own brewery. “The floor on the production side has 12 unique drains in it so we don’t have to chase water. Breweries are the cleanest places on the planet.” 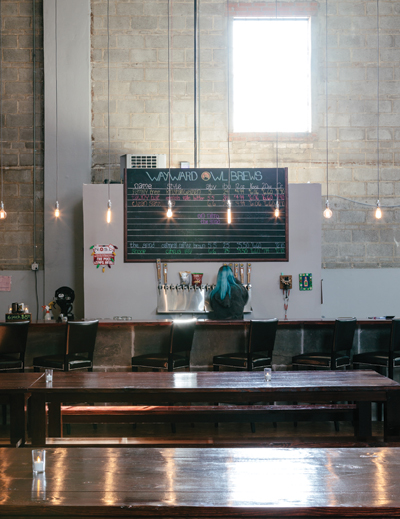 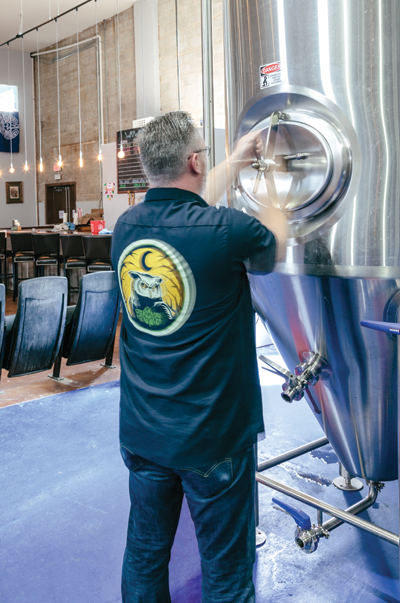 RIGHT, “My family’s Scottish crest is an owl and I was trained at a [brewery] called Black Raven,” says Boswell, explaining the inspiration for the company’s logo. “The owl and the raven play tricks on one another in mythology, so it’s a tip of the hat to the guys who taught me.”

Boswell’s vision for the production area was born of function, but for the tasting room, he had something a bit more down-home in mind.

“We are trying to cultivate a living room vibe,” he says. “It’s a family room. Even if you bring your kids, there is something for them to do.”

Cushy brown leather sofas populate the lounge area, which is stocked with board games. A sleek, stained-wood shuffleboard separates the lounge area from long, beer hall-style tables with benches. The necessity of partitioning the production area off from the public tasting area, however, is the brewery’s pièce de
résistance — a long row of theater chairs, which Boswell says are greatly admired by the brewery’s patrons.

Boswell’s favorite aspect of the building’s design is the approximately 24-foot-high ceiling, which made hauling in the tanks a much less daunting task. It also adds to the feeling of space. Being able to offer off-street parking in a rear lot is also a bonus. Food trucks, pop-up food events and crawfish boils are also in regular rotation, and since the building is surrounded by homes, one of Boswell’s priorities is to be a good neighbor to the residents.

“We’ve been really welcomed with open arms,” he says. “Neighbors tell us we did a great job bringing the building back to life. People who grew up here will stop and tell us stories. We do our best to make sure the impact we have on the neighborhood is positive. I put ‘No brewery parking’ signs all over in front of neighbors’ houses. The little things count.” 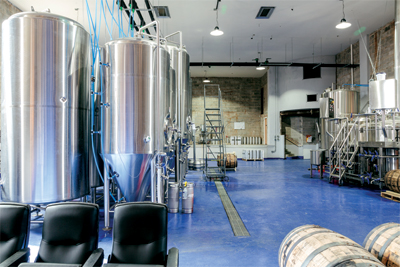 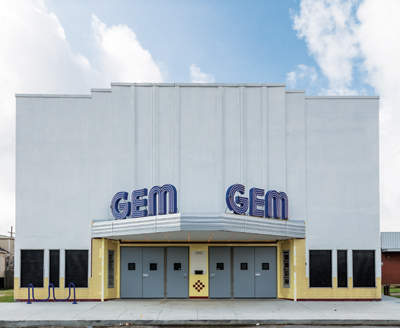 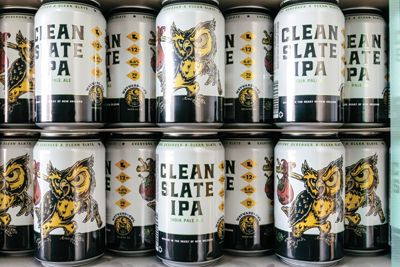 TOP, Having worked as a brewer in Redmond, Washington, co-owner and brewmaster Justin Boswell knew exactly what he wanted for the production area. Especially important was the inclusion of 12 drains to cut down on the cleanup process. The building’s approximately 24-foot ceilings made the job of getting the tanks inside much easier. Boswell says the perimeter of the building was in excellent condition, but considerable work had to be put into leveling out the floors, which were sunken to create the slant typically found in theater design. BOTTOM, The art deco-style Gem Theater opened in 1951 and is recognized as the area’s last black theater. It was designed by the notable Louisiana architecture firm of Dreyfous and Seiferth, which also designed the new Louisiana State Capitol in Baton Rouge and the Pontchartrain Hotel on St. Charles Avenue.

The dazzling, blue “The Gem” marquee sign outside was a full restoration done by Graffiti Graphics on Oak Street. Eventually, the couple plans to add a hanging screen and ceiling-mounted projector to harken even more to the building’s moviehouse past.

Until then, patrons can play games, kick back in the theater seats, at the tables, on the sofas or at the bar, and enjoy craft beers that Boswell designs specifically to go with food, because this is Louisiana, after all. For his part, Boswell is content to work the 13- or 14-hour days required of a new business owner and a brewmaster-brewery owner in this space that he crafted as carefully as he does his beers.

“Every day I walk in and I’m like, ‘wow,’” says Boswell. “Even on a rough day of brewing, at the end of the day, the tasting room is open and I can look over and see someone at the bar and I can see the [exhales]. I can share that with them.”

Main goal: To restore the space, create a high-functioning production area for brewing and to have a comfortable, living room-like tasting room

Biggest Challenge: Working around some of the design restrictions associated with being an historic landmark