And since she believes in collaborating with fellow business owners, rather than competing with them, McGillicuddy’s latest venture seems like the perfect fit for her.

She launched the Babes in Business map – a shopping guide that features 45 women-owned businesses throughout New Orleans. The colorful map includes each shop’s address, along with a hint of what they carry – whether it’s art or clothing apparel. Restaurants owned by women are also on the map.

“I think, without getting too political, there's a huge disparity in terms of how women are supported in this country. Both financially, and in terms of representation,” said McGillicuddy, adding that the map is not “anti-men.”

“It's really meant to focus on celebrating women, and the idea is that if you celebrate women and support women, they give back to the community at large,” she explained. “So it's kind of using the support of women as an entry port, to support the larger economy and the larger community.”

When the map was first designed in early 2018, it was only available at Glitter Box. But soon, other shops began sharing the map with their customers, as well. The group of business owners promoted the map via social media and gradually acquired new participants, who are now featured on the current, revised map.

“Everyone has been so supportive and so sweet,” said McGillicuddy. One business owner recently stopped by Glitter Box with a bouquet of flowers, to thank McGillicuddy for the support.

“One of the coolest things is that locals come in and say: "I saw this (map) in another shop, and they sent us to you.’ But a lot of people from out of town are actually using it,” said McGillicuddy, explaining how visitors came across the map while searching the internet for New Orleans-based boutiques.

McGillicuddy is in the process of creating a networking group for women in business, along with an online directory featuring more than 500 businesses within Orleans Parish. The “all-encompassing” directory will not only include retailers, but female professionals in various fields – whether it be medicine or home maintenance.

“It basically says: ‘If you want to support women, here's an easy way to look up businesses in town that are women-owned and -operated.’,” said McGillicuddy, adding that prospective participants should contact her. “The idea is to get as many people involved as possible. 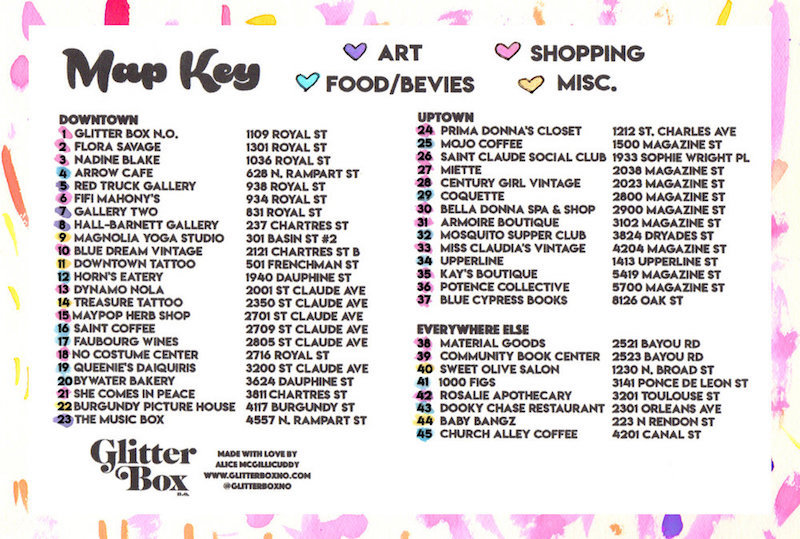 Jay Cicero to Be Inducted into Louisiana Sports Hall of Fame