NEW ORLEANS – The makers of Mockly, a new New Orleans-born booze-free beverage, hope to find a following among locals who use the weeks between Christmas and Carnival to take a break from alcohol. Pre-mixed and canned flavors include the mint-spiked blueberry of Baron von Blue, the “peachy citrus effervescence” of Eye Opener, and the fruity rosemary-finished pomegranate of Love Bite.

“Whether you overdid it during the holidays or want to give your system a break before Mardi Gras, we designed Mockly to be the alcohol alternative you’ll come back to again and again,” said company co-founder Aimée Sedky. “It’s about how the flavors come together to give the sober and sober-curious a new option that feels like an indulgence, not a sacrifice.” 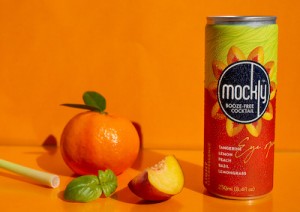 Mockly recipes are developed in New Orleans by mixologist Jesse Carr. The company’s “beverage architect” is in Los Angeles and the product is canned by two co-packers, one in Philadelphia and one in Athens, GA.

For the first year, Sedky and business partner (and husband) Tarik “bootstrapped” the initial concept, flavor development and packaging design. They then secured a first round of investment, which covered production and marketing of the current New Orleans “proof of concept” phase. Sedky expects to close a second round of financing in early 2022 to expand distribution and sales throughout the Southeast, and the company plans to continue raising capital as the business scales nationally.

Sedky said Mockly sold out its first run – about 12,000 units (cans) – in four months, ahead of schedule with only two points of distribution in New Orleans: bars and restaurants (on-premise) and online. The company says is has already sold 90% of the second run, which was more than three times the volume of the first.

Mockly’s on-premise velocity (number of cans sold per flavor per single restaurant per week) far exceeded projections. The owners had predicted a velocity of six, but the actual number is nearly 15. At popular Uptown restaurant Shaya, the velocity number reached the 40s, which was nearly eight times company projections.

Sedky said that repeat purchases have been very strong as well. 90% of bars, restaurants and markets that took an initial delivery continue to repurchase Mockly in greater quantities over time.

Distribution deals are in place with Crescent Crown and Neat Wines. As of Jan. 5, the beverage can be found in more than 20 grocery stores and markets, as well as more than 30 bars and restaurants in the greater New Orleans area, including the Northshore and West Bank.

Sedky said she would like to produce Mockly in New Orleans, but even though there’s a lot of beverage production in the city  — including kombucha, craft beer, liquors, sodas, bitters —  she couldn’t find a facility that was able to handle the combination or ingredients, the “kill step” process (when harmful pathogens are eliminated) and canning.

And to anyone unconvinced by the prospect of a booze-free January? Never fear. Sedky point out that her carefully crafted mocktails also make great mixers for the real thing. …